In just three years, the founder and president of the youthful Okko hotels chain, Olivier Devys, has opened a staggering 8 facilities, all in France. A further 3 are scheduled to open in 2019. The latest opening has taken place in Strasbourg, a fundamental component of the Presqu’île Malraux development project, an abandoned industrial area at the heart of a multiple real estate programme under the supervision of the investment group Icade.
Anne Demians won this exceptional project, both in terms of volume and architecture, which in addition to the Okko hotel also includes the Cité de la Musique et de la Danse, a multimedia library, shopping centre and a cinema complex. Particularly fitting for Olivier Devys and his relentless pursuit of innovation and authenticity grounded in cornerstone values of his small (for now) empire: modernity, generosity, conviviality and serenity. “The most welcoming and pleasant hotel at the best price, in every city”. This is his unshakable objective for guaranteeing something more for customers, without any unpleasant surprises. The cost of a stay includes food and drinks, Wi-Fi, on-demand Tv, phone calls, a Nespresso machine and a bottle of Evian in each of the 120 rooms, including all 8 premium category ones, of course.

Studio Norguet Design has fully embraced this philosophy by creating an interior project focused on the customer experience, for the entire Okko chain. 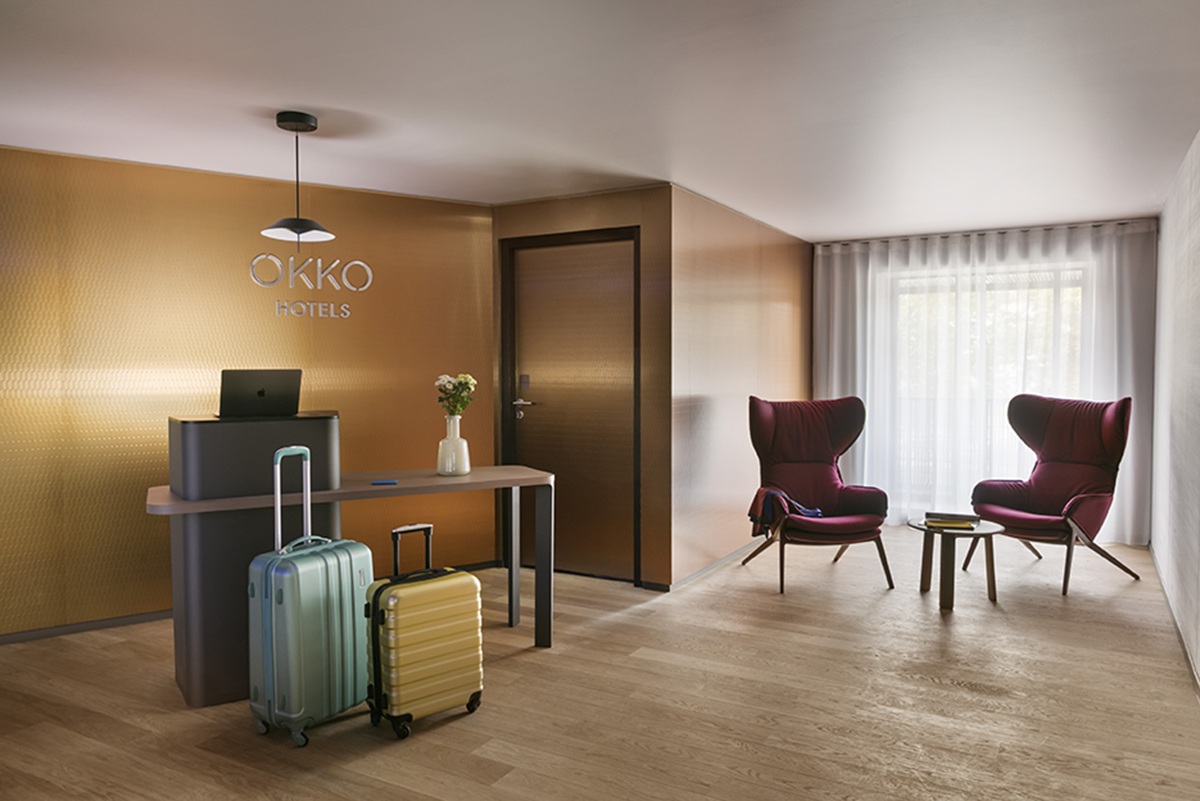 Patrick Norguet recounts: “When Olivier asked me to accompany him in the creation of a new concept of hotel, no briefing actually took place, so to speak. The birth of Okko was a story grounded in mutual trust. I started to conceive a universe, design a story of hospitality, imagine a graphic image…effects which also originated from first-hand experiences during my travels and time I have spent in hotels around the world. I’m not interested in decoration, hotel quality is all about service, much more than design. Hotels are places of affection, they are complicated and intimate, places of exchange, meetings and conviviality. This is why I have always wanted to simplify certain functions, entirely rethinking spaces to confer a certain singularity to reinforce the notion of travel”. 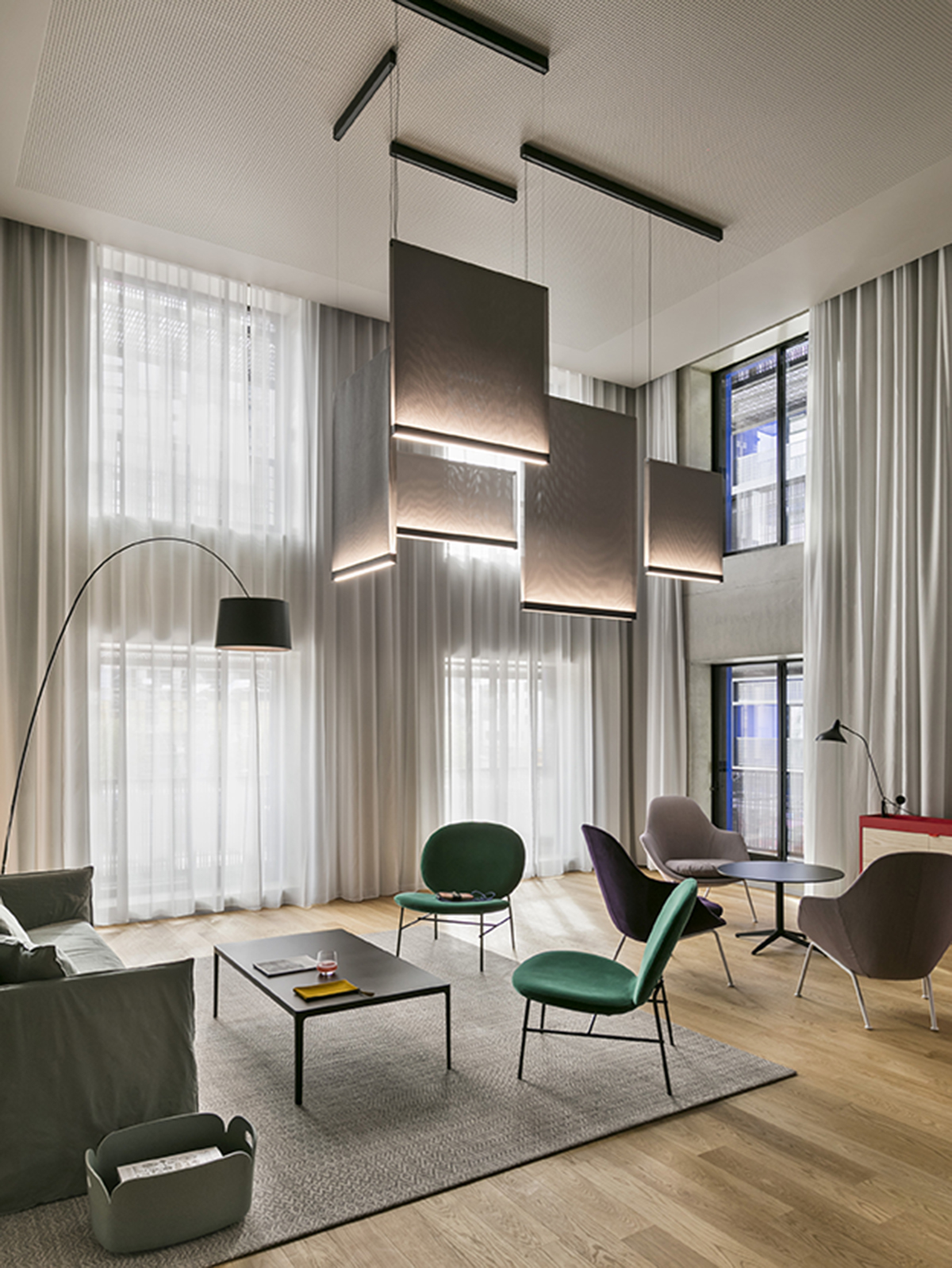 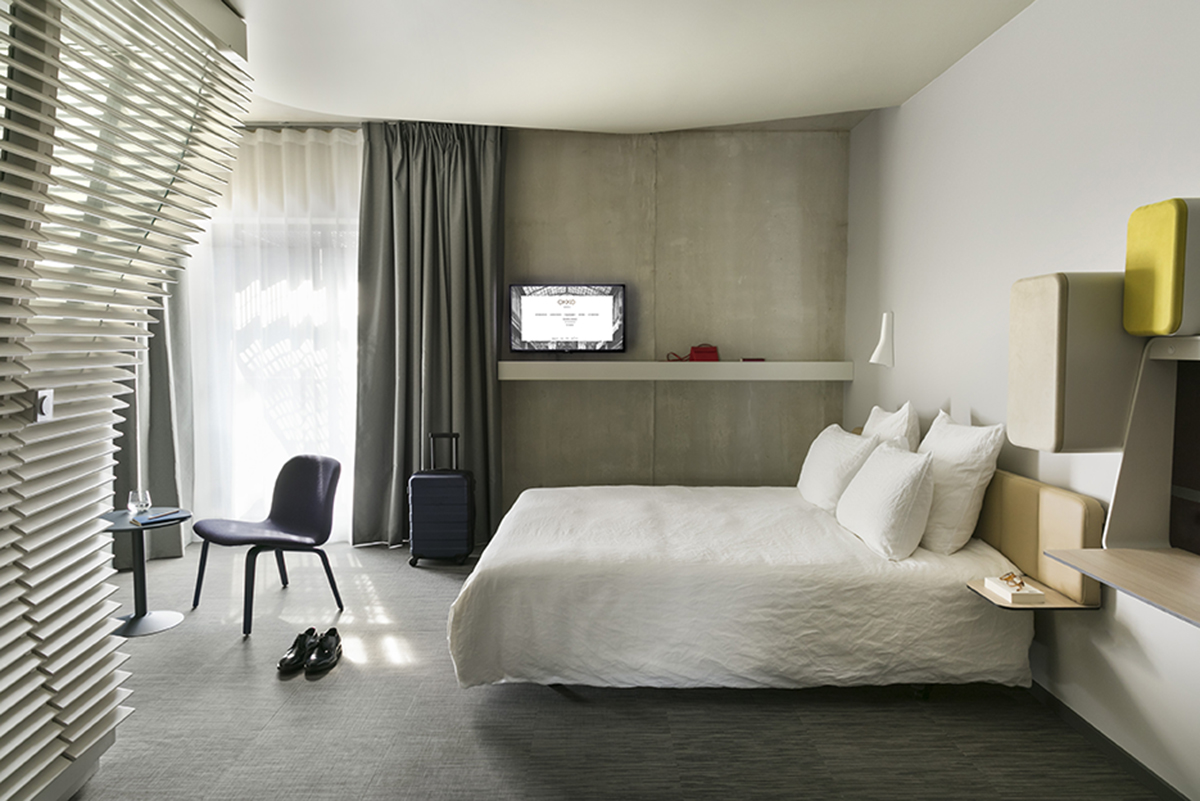 The facility’s beating heart is its Club: 350 sqm dedicated to Norguet’s intuition, where the designer has literally materialised the concept through style choices and precise furnishing pieces. “I designed it as an informal space for sharing, as though you were at home – he emphasizes. The result is a convivial and laid-back atmosphere, open 24 hours a day and divided into corners where you can also work and enjoy a number of all-inclusive benefits. Vic and Fox seating by Pedrali, selected and designed by Norguet, make a significant contribution, combining aesthetics with functional and emotive components. 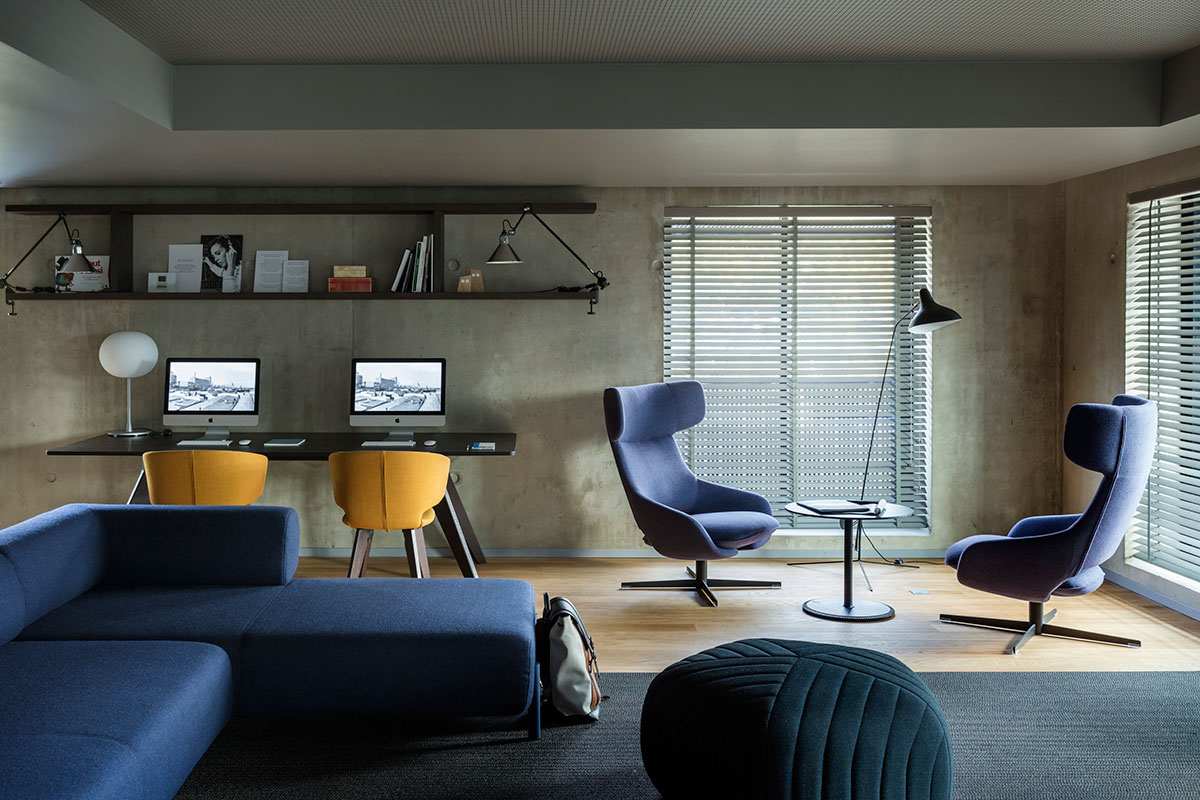 “Okko Hotels have a strong identity, we believe that the character and harmony which shape our products significantly contribute towards the project “ explains Monica Pedrali, the company”s CEO.
Club interior, such as lamps by Foscarini, Tacchini seating and comfortable Kalm armchairs by Artifort and Muuto accessories. 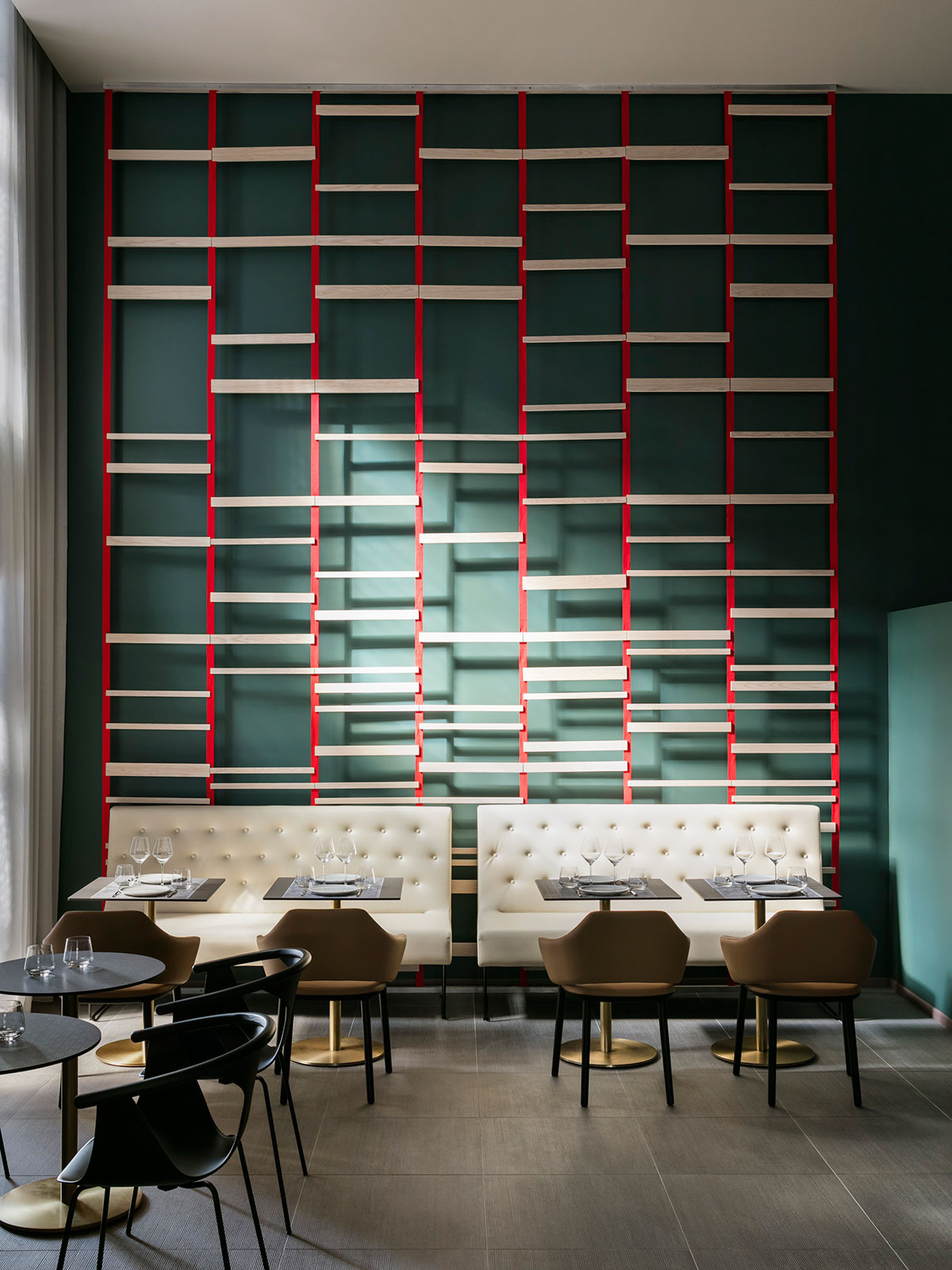 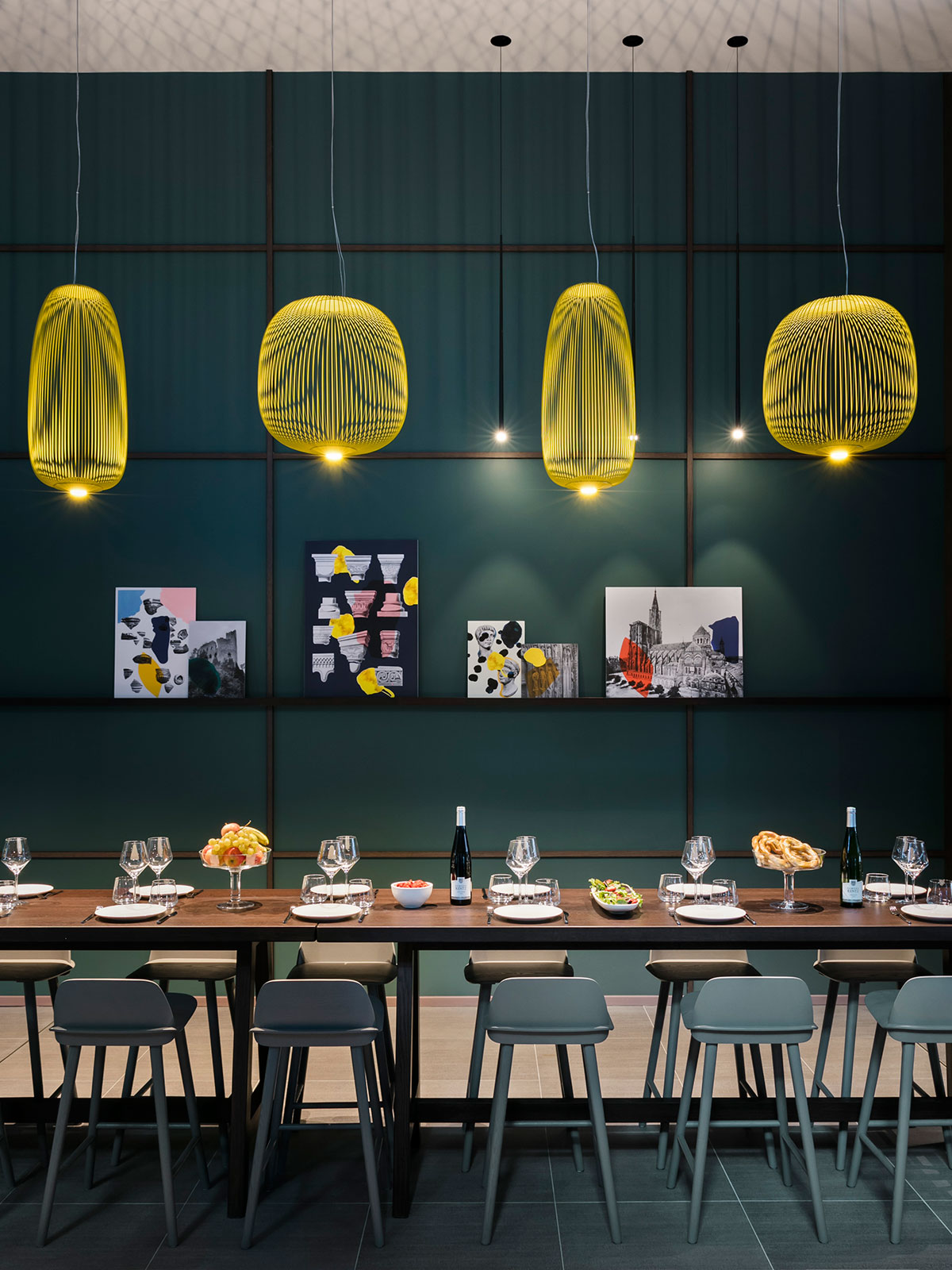 The conception of rooms is grounded in space optimisation and comfort, with attention to the ‘surprise’ factor, by means of architectural forms and materials, such as bathroom walls clad in state-of-the-art ceramics which continue through to the room, an idea which inspired the Slimteck collection designed by Norguet for Lea Ceramiche, exquisitely matched with mesh pattern seating Kobi, by Alias. The designer emphasises that ” the evolution of our times is suggesting new uses”. Donque, bonne séjour!. 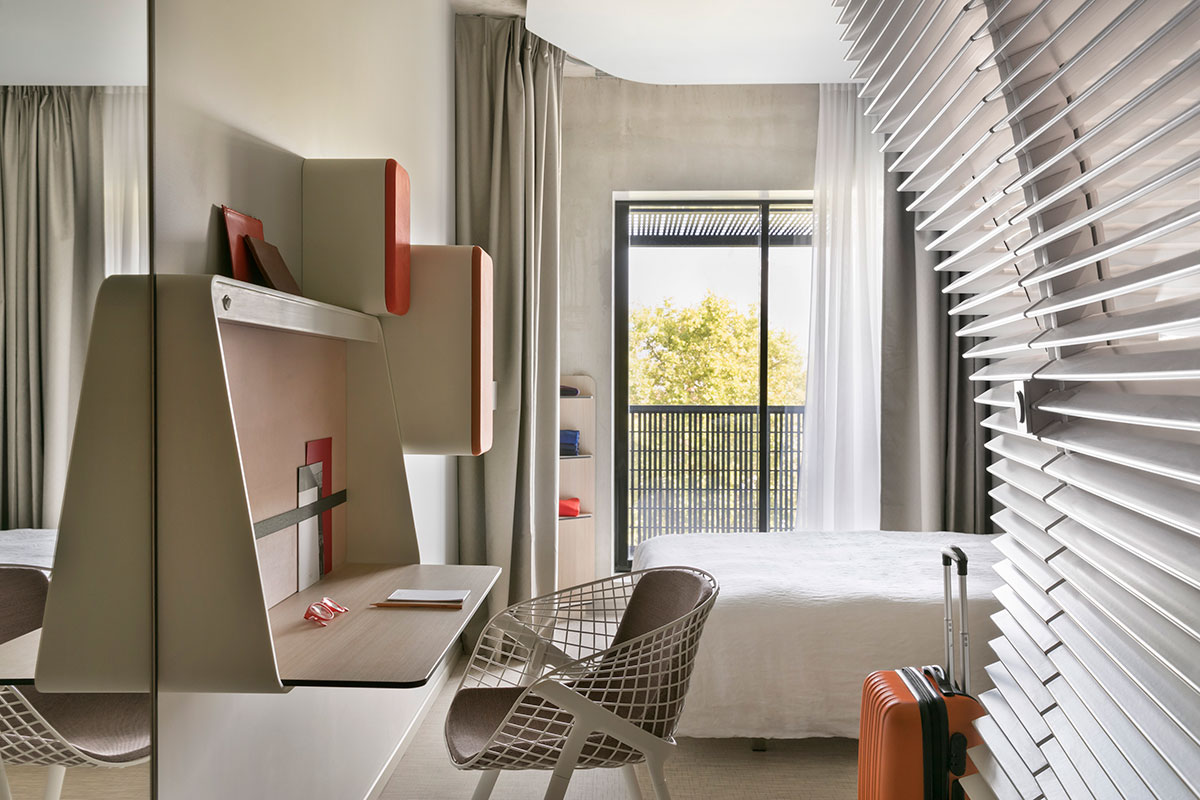 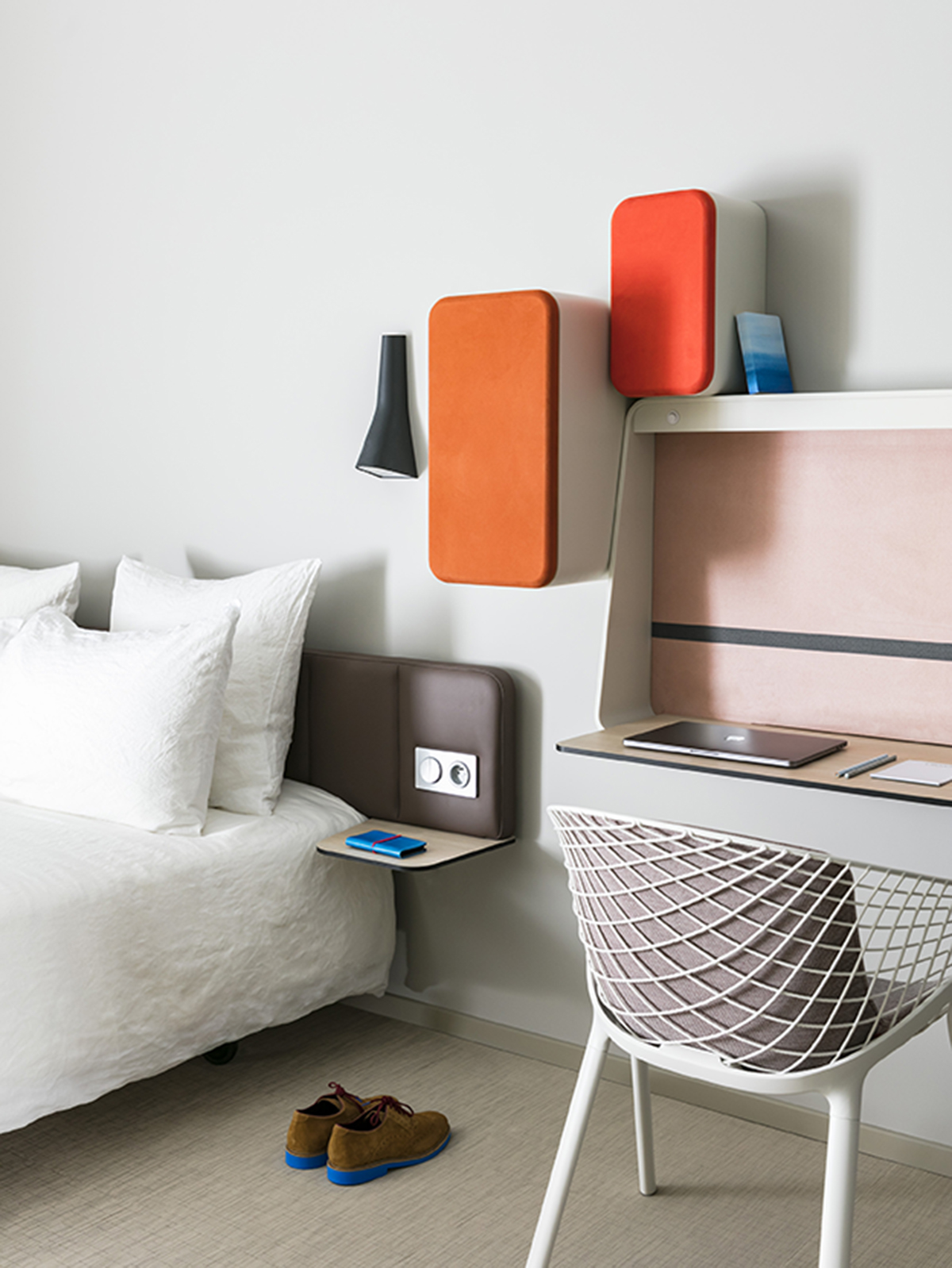 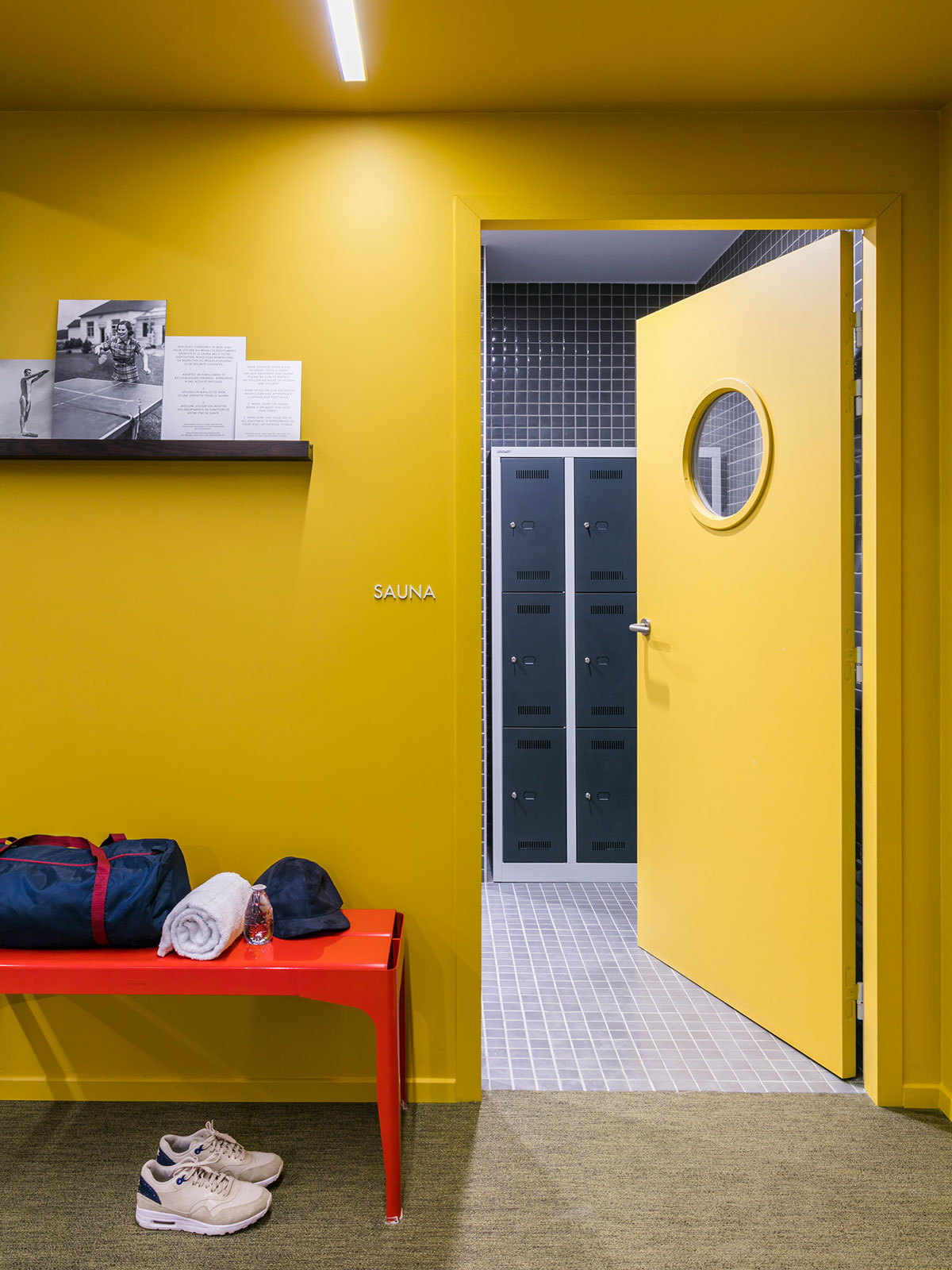