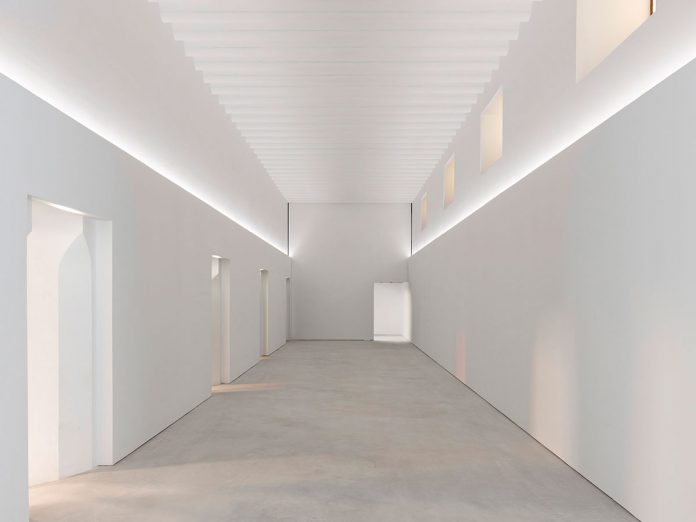 “I chose an architectural style that exists silently, serenely, without drawing attention to itself,” is how Elisa Valero Rames describes her design for the new exhibition space at the Convent of Santo Domingo in Huéscar, Andalusia. Rames is an architect and professor at the University of Granada, where she also has a small studio. Hearing her speak about this project is like being given an insight into her design manifesto.

She talks of the importance of “the economy of expressive resources”, and – sure enough – nothing in her designs or projects comes across as useless or superfluous. Everything must be carefully thought out to respect place and time.

In this case, the design was based on a project initially developed by Antonio Jiménez Torrecillas (the Granada architect who died in 2015). One of the common features of Torrecillas’ work was the relationship between the existing and the new, a theme central to the Convent of Santo Domingo, which was built in 1547 – three years after the arrival of the Dominicans – and declared a Site of Cultural Interest in 1980.

The original complex was designed according to the typical style for religious buildings of the era: a square-shaped building with four wings around a central cloister and a church on the side. In reality, only part of the full structure was actually built.

The 167m2 exhibition space was built in one of the original wings, where the roof was composed of wooden beams and panels and the structure had been reinforced to allow it to be used as a grain store. The project ensured complete respect for the original structure and focused on reclaiming space to create a low-cost room.

A new staircase to the upper floor was added, made from perforated metal sheets with bespoke cut-outs to allow light through. One of the wings now features an undulating surface in the ceiling, which has done wonders for the acoustics

As always, Rames (who is also the author of the books La materia intangible. Reflexiones sobre la luz en el proyecto de arquitectura [The intangible material. Reflections on light in architecture] and Diccionario de la Luz [Dictionary of Light]) placed great attention on the concept of light, which she sees as a something that can model a space and assume a key role in any design. In this case, light that comes through the windows passes through sheets of alabaster, bathing the bright-white interiors in an almost sacred glow.

When the hotel is a destination in its own right