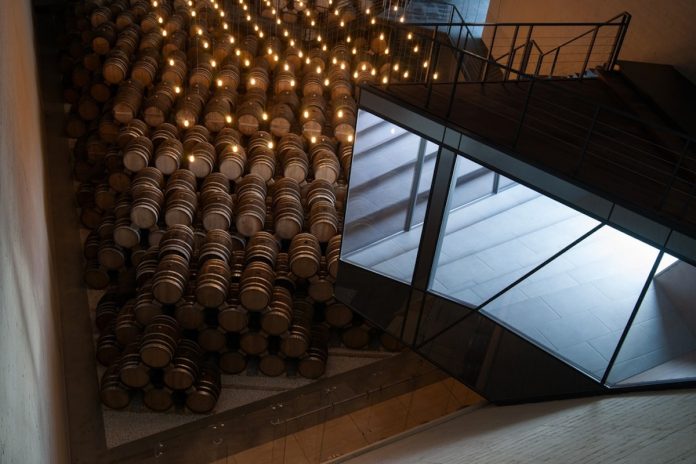 Architecture is seen as a way of giving life to a concept – an aesthetic ethos – in the eyes of Moscow-based architectural practice TOTEMENT/PAPER, who were the brains behind the Russian Pavilion at Shanghai’s Expo 2010, among many other projects.

Given that the Alliance 1892 project was taking place in an empty lot near a railway line in Kaliningrad, an area that has spent many years under German rule over the centuries, the main objective for TOTEMENT/PAPER was to build a building symbolising creation and rebirth and to breathe new life into the city. Consequently, the designers were keen to make sure that the external form of the building provided a clear insight into what it was all about, drawing on their signature contrasting style to achieve this – tall and short, heavy and light, opaque and transparent, dynamic and static, feminine and masculine, outside and in… 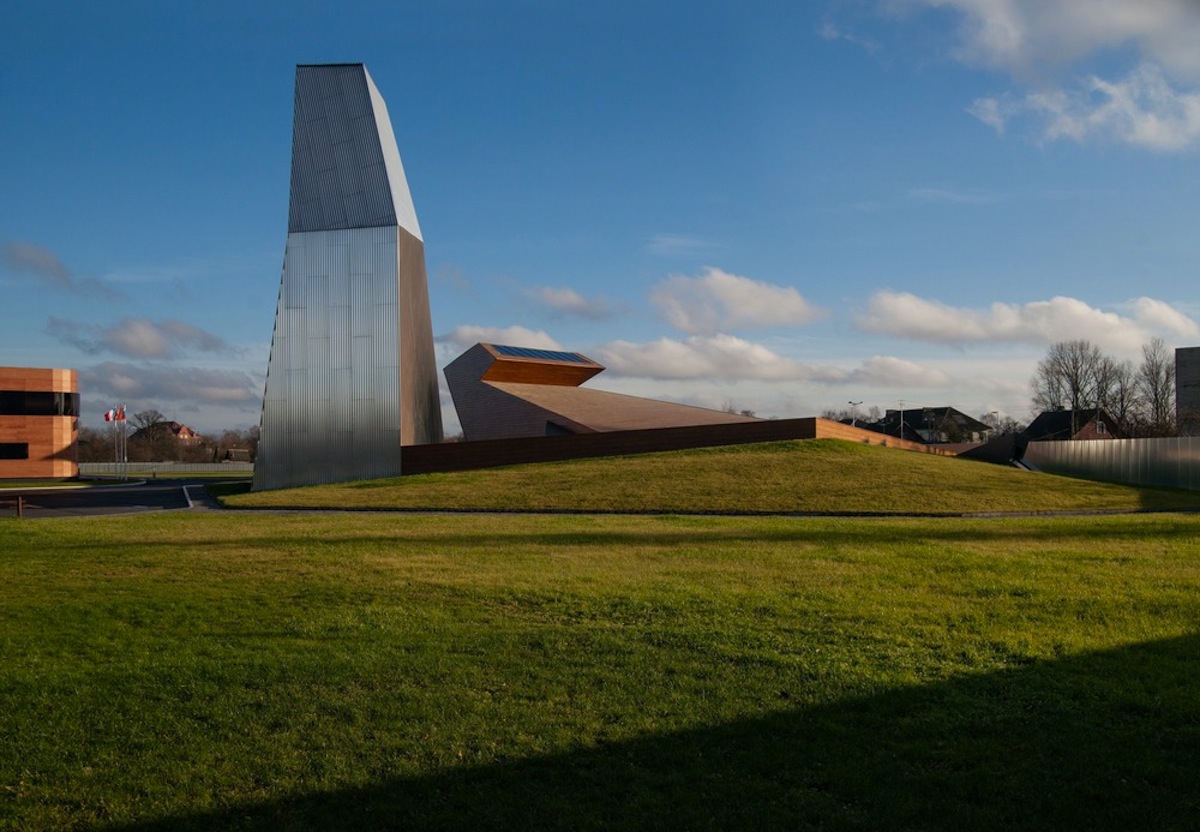 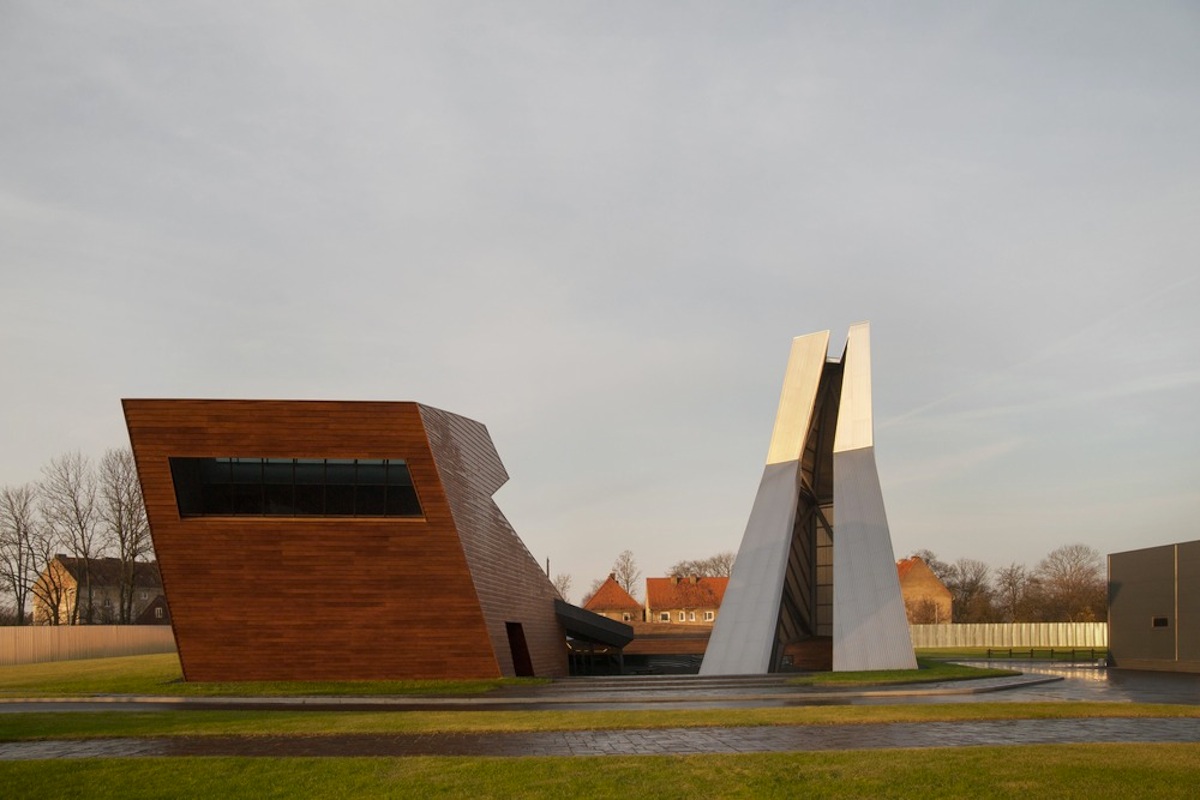 The symbolism continues when you look at the actual purpose of this complex. Brandy – made using grapes – is steeped in Cristian symbolism, linked as it is to the idea of the Tree of Life and the blood of Christ. And a closer analysis of the general layout of the site reveals that the two main buildings almost seem to embrace one another, like the Yin and Yang symbols. 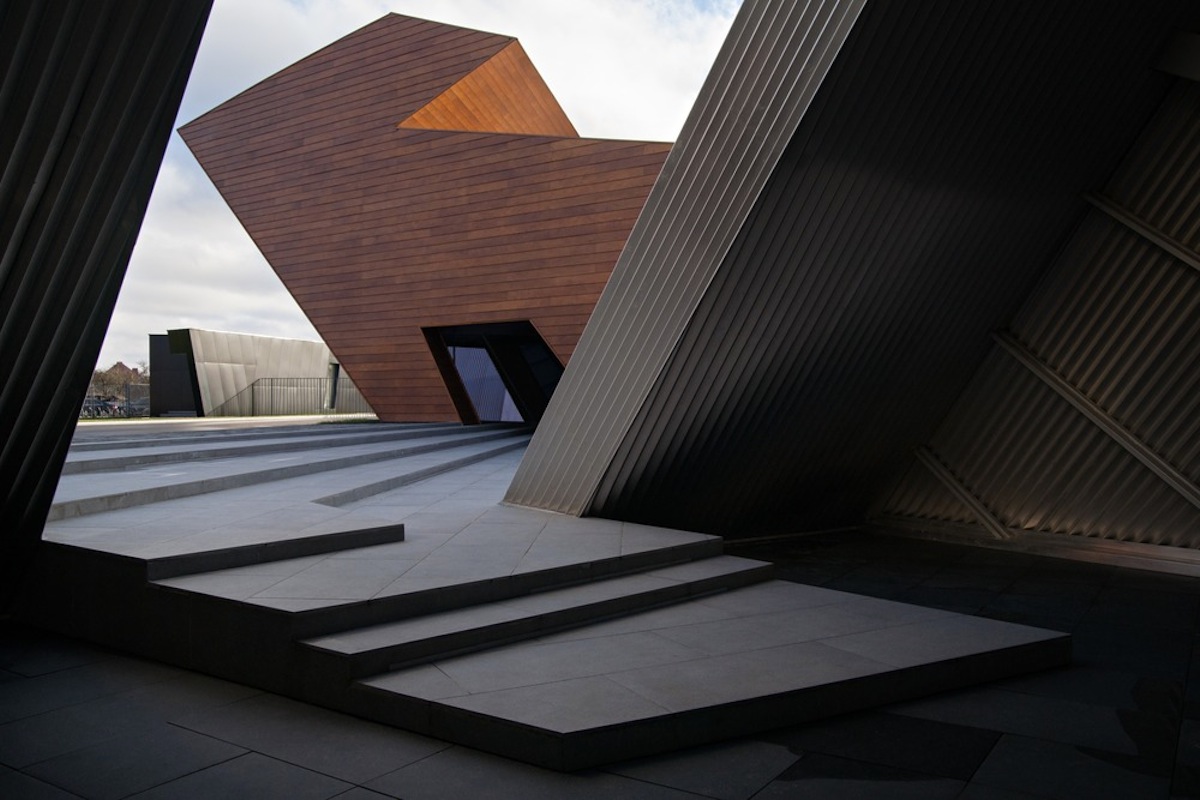 The smaller building – in wood – is home to the warehouse. Its diagonal shell features a large glass section, allowing a glimpse of the sky outside. It appears deeply rooted in the earth, from where it seems to rise up, evoking the symbolic image of Mother Earth and the Yin symbol: profound, cold, low. Next door stands the taller part of the complex, a metal tower stretching high into the sky, its metal cladding shining in the sun, restoring light and masculinity. The lower part of the tower is home to a triangular staircase which serves as the connection between the wooden warehouse and the metal building. The windows of this staircase allow visitors to gaze into the distillery without even having to step inside. Continuing the theme of crossover between the two buildings, part of the wooden warehouse seems almost to pierce the tower like a spear. The third, separate, building, is a clock house announcing the entrance, gate and gardens.

Inside, the spaces mirror the design of the exteriors, with high ceilings and visible structural elements, unrefined cement alternative with wooden furniture. Yet nothing overpowers the brandy barrels, which are theatrically lit by the many lamps hanging from the ceiling. 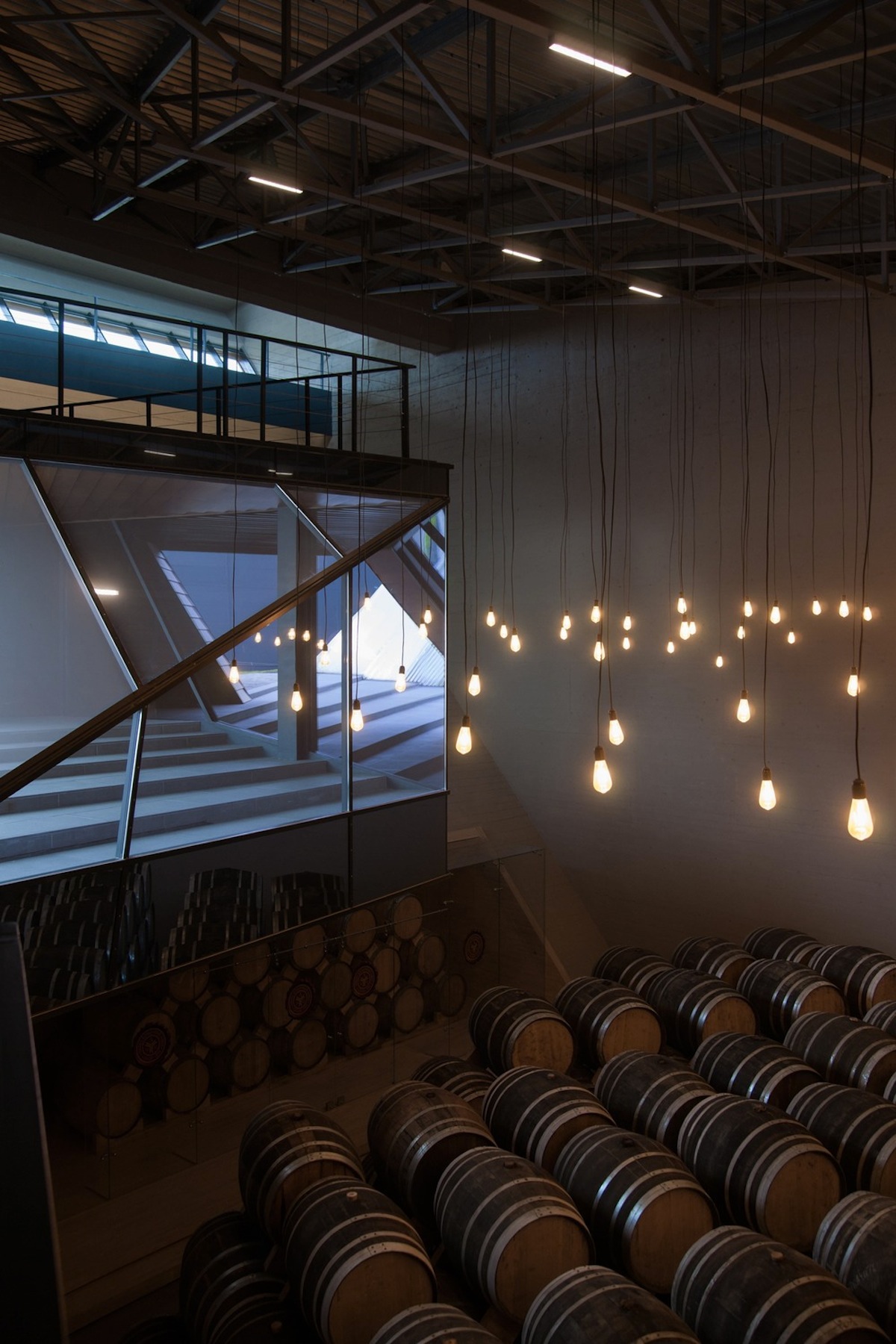 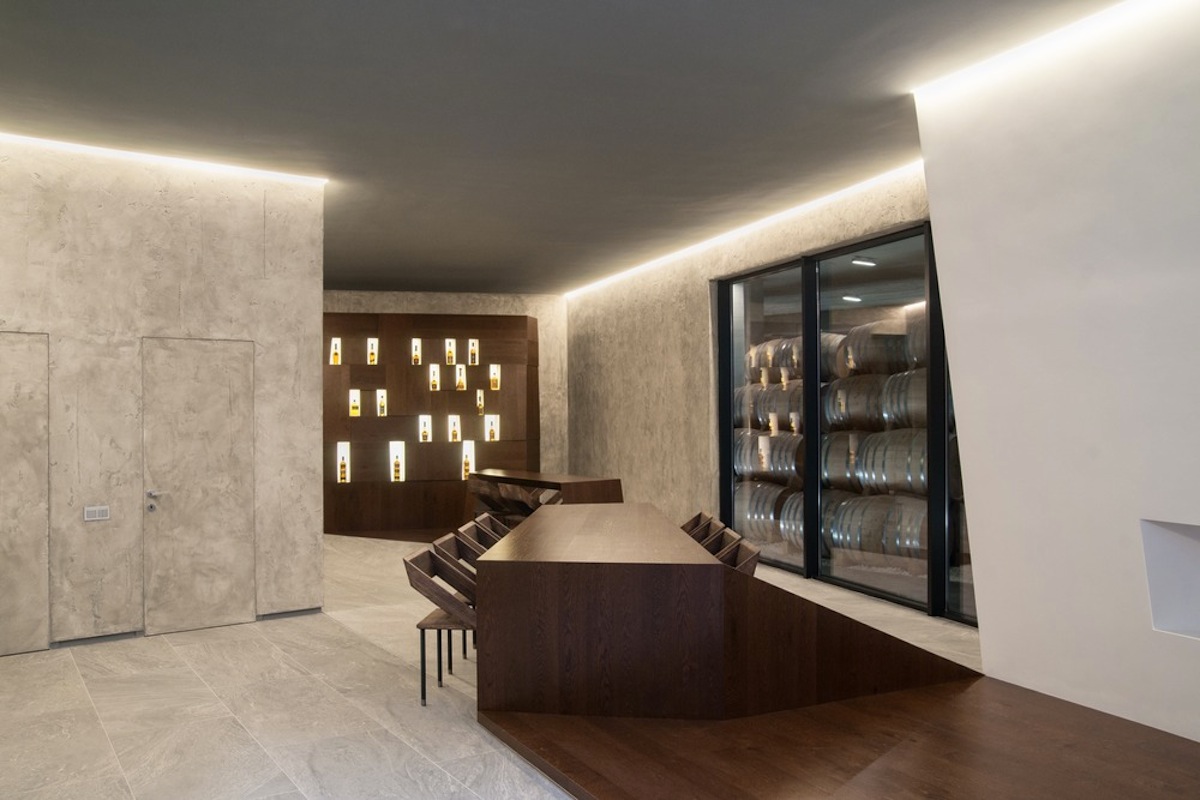 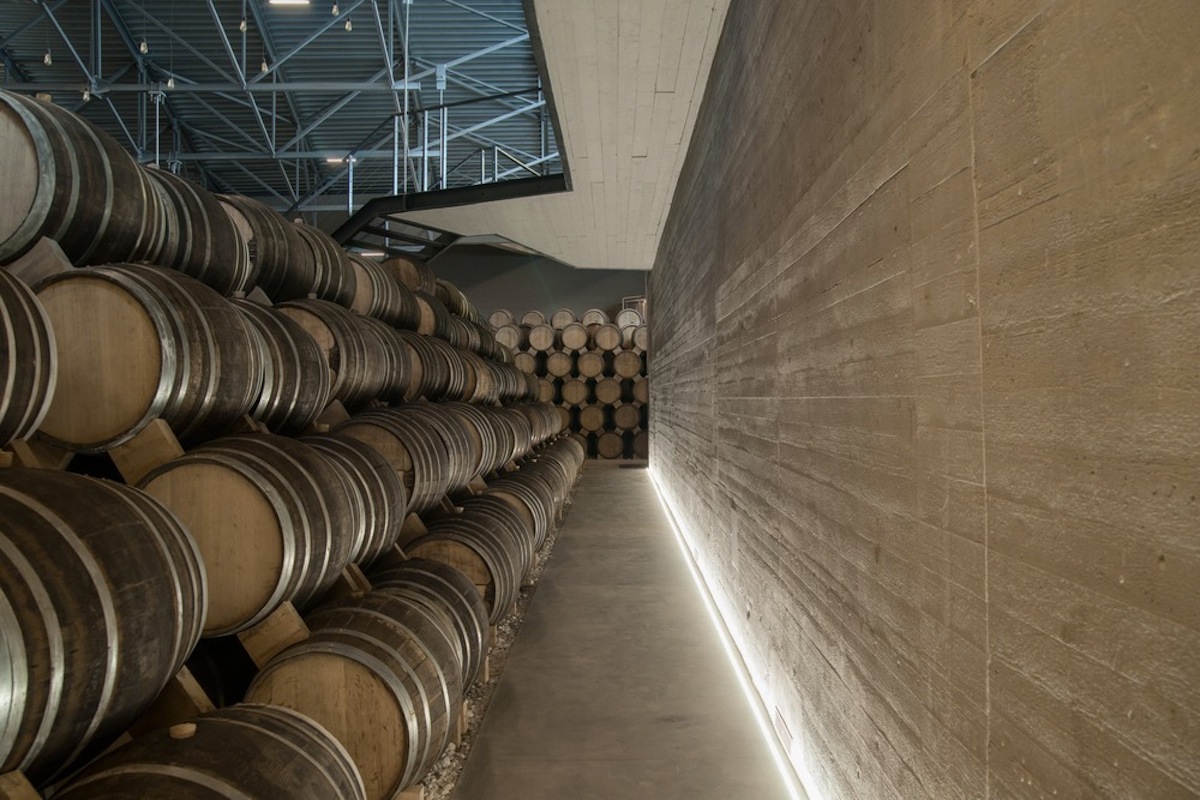 A vision of excellence