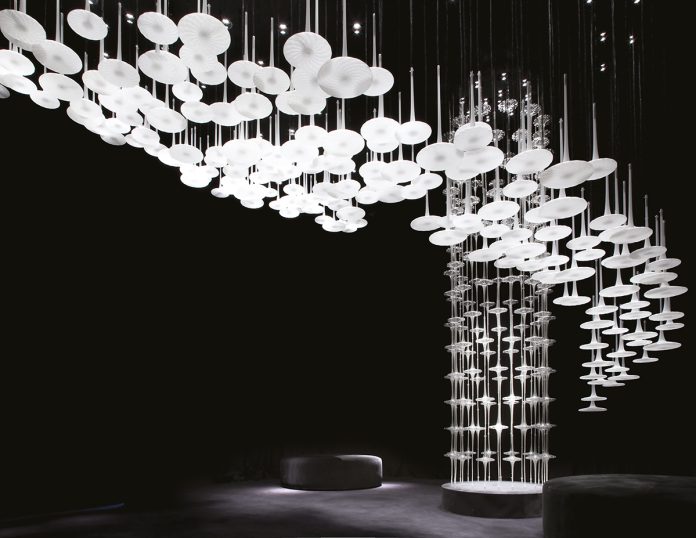 The story of Melogranoblu has always been characterised by a touch of magic. Since its origin, twenty years ago to be exact, when Massimo Crema and Ermanno Rocchi founded their own company and dedicated themselves to the creation of photophores: refined, lantern-like Murano glass objects containing candles. The splendour of light, its expressive potential matched with masterfully crafted glass, led both founders from the world of decoration towards the realm of lighting in the early 2000s, coinciding with the earliest use of borosilicate glass. Inside the company’s workshop based in Marostica, an area which has held true to its tradition of high Italian craftsmanship, magic is brought to life by means of luminescent glass pieces characterised by organic and natural contours.

It made its début in Opera, a line of suspended lighting fixtures with silk tassels, which already demonstrated the formal potential of the compositions, defined by highly numerous groups of glass pieces of remarkable aesthetic and technical lightness. The collection also manifested the primary characteristic of Melogranoblu products: their scenic artistry which lends itself to a wide range of residential and project contexts.

Lightness which also offers greater resistance and high transparency, therefore an important capability of light reflection. Massimo Crema explains: “The next intuition was that the glass pieces, when placed under light, produce enhanced effects, reflect light, illuminate themselves and increase the luminosity of surroundings. So, we decided to remove the light from the glass so that it could exist independently”. Cue the creation of Hydra, a modular system which consists of glass pieces hanging from a braided metal tubular, externally illuminated by false ceiling-mounted light sources.

A second aesthetic revolution characterizes the latest collections of pendants, which also introduce new metallic finishes. The experimentation on the product is brought to the highest levels, facilitated by creativity and research encouraged in the company’s laboratory, as well as by the very properties of the material that – skilfully blown – is modeled with results that evoke pure magic. Thus are born artistic works such as Soap, a spherical element that reveals in the inside (when lit) a glass sculpture, and Opium with a singular organic form; Perfume, which rises with lightness through opposing geometries, and Serendipity that, sinuous and curvilinear, pays homage to the Hydra system by reinterpreting one of the glasses and proposing it in the suspension or table version.

The magic enchants also the Milanese FuoriSalone circuit, where the emotionality of such scenographies is amplified in the installation Oneiros, protagonist at the Superstudio: an immersive path of discovery of the evocative, vital and magical force of light.

Outdoor lighting, where the light is in dialogue with the night

The Smart Home according to Lapalma