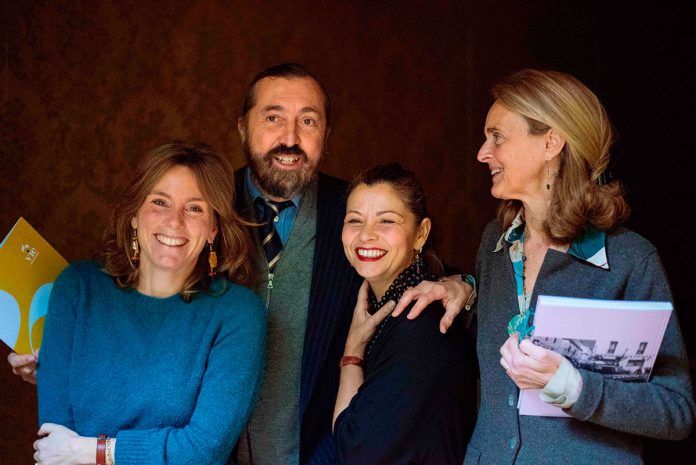 It aims to encourage innovative projects within the oldest part of Milan – the area between the Basilica of Sant’Ambrogio and Piazza Cordusio – “with particular regard to design and art”. “5vie art+design” presents itself, now in its fifth edition, a territorial and cultural marketing project sponsored by the Municipality of Milan, aimed at promoting the historic “5 Vie” in the centre, Milan’s oldest and historically richest neighbourhood which will be “projected” towards state-of-the-art design during MDW.

Ever-faithful to the values of its mission – history, culture and innovation – this year 5vie art+design presents itself with an even richer and more vibrant programme, as Christina Tajani, Municipal Councillor for Labour Policies, Production Activities, Fashion and Design, explains.

This year the  “5Vie” Design Week will open with “It’s Circular”, a forum dedicated to the economy and circular design, scheduled for Sunday 15th and Monday 16th

April at the ANCE headquarters in Via San Maurilio, in the heart of the district. The forum is sponsored by the Ministry of Economic development and will also include contributions

from the businessman Arthur Huang, the designer Matteo Ragni, the CEO of Material ConneXion Emilio Genovesi, as well as a selection of academics from some of the country’s top universities.

Christina Tajani,  Municipal Councillor for Labour Policies, Production Activities, Fashion and Design, explains: “The rich programme of events and presentations proposed by 5VIE is part of the Administration’s broader plan of bringing the vivacity and creativity of Design Week to all the city’s neighbourhoods, based on the conviction that these are not just occasions for exhibitions or meeting professionals, but also occasions for offering the city and its inhabitants the chance to discover new creative languages and young talents, in synergy with a long-standing tradition of artisanship and activity within the neighbourhood”.

The four founders of  “5vie art+design” – Aline Calvi Radice Fossati, Ernesta Del Cogliano, Alessia del Corona Borgia and Emanuele Tessarolo – have developed new cultural collaborations, with the selection of excellent curators including  Nicolas Bellavance-Lecompte, Maria Cristina Didero, Annalisa Rosso and Alice Stori Liechtenstein – for the creation of projects focused on the combination of research, art and savoir faire. Each have been asked to express themselves by means of a selection of artists and designers capable of interpreting the 5VIE mission, by inhabiting its locations. Cue the exhibition project Unsighted, curated by the Canadian Nicolas Bellavance-Lecompte; the sensory installation Arcadia, curated by Alice Stori Liechtenstein; the exhibition Vegan Design – Or the Art of Reduction, curated by Maria Cristina Didero; the personal exhibition  Panorama, by Valentina Cameranesi. Curated by Annalisa Rosso.

Within the context of the reuse of unused urban space, this year “5VIE” will inaugurate a new creativity centre at the Meazza site, a reference and aggregation point for all Milanese citizens which which was closed two years ago. Meazza will also host the “5Vie” info/press point, whose design network will include BDDW, Davide Groppi, Apparatus, Lisa Corti and Six Gallery, as well as cultural collaborations with Mosca Partners with DAMn° Magazine, in Palazzo Litta; Seletti’s provocative fashion show with Design Pride; the Dutch Masterly – The Dutch in Milan in Palazzo Turati; Diesel Living with the project “Out of this world”; exhibitions by Giopato & Combes; Bitossi Home; Local Design with its 26 Australian designers; Markus Benesch at the Antico Oratorio della Passione; two new entries: Lexus and Lensvelt; artisan craftsmanship with Giacomo Alessi; material research with Garnier & Linker, as well as countless other events and internationally acclaimed exponents.

EquipHotel 2016: the Parisian appointment with the international hotel industry

WAF 2016 votes for the National Museum in Szczecin, Poland as...