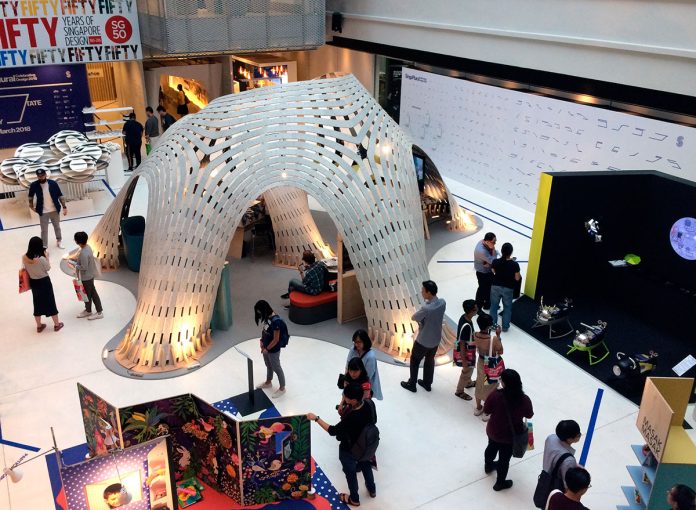 “A State in Play” is the guiding theme for the 2018 edition of Singaplural, an exhibition which contextually and faithfully accompanies Singapore Design Week. Open until 18th March, in the heart of the National Design Centre, Singapore, the collective consists of 12 highly experimental projects: not only finished products or installations, but also prototypes and ‘accidental results’ stumbled upon during the creative process, best described as a ‘playful’ process which have inspired the exhibition to develop. Therefore ‘play’ defines this year’s theme, while also referring to cornerstones of the creative act,  which Singaplural aims to focus on and attract attention to.
Architects, artists, designers have all been encouraged to reinterpret, challenge or enrich traditional perceptions of materials, objects and phenomena.
Here we have the installation Play at work by Benel and 11H, or Headspace by Kvadrat for Publicworks; then there is A Room to Eternity by JVCKenwood and AK+, or Play Book by Pinch Design.

The curators explain: “With the theme ‘A State in Play’ we aim to shift the concept of play from something that is frivolous and amateur, towards a process which is the quintessence of design and innovation. The word ‘State’ has a dual meaning: it is a synonym of ‘phase’, preceding the project process, but it also refers to Singapore, the city from which our design industry develops, in favour of innovation, experimentation and research”.