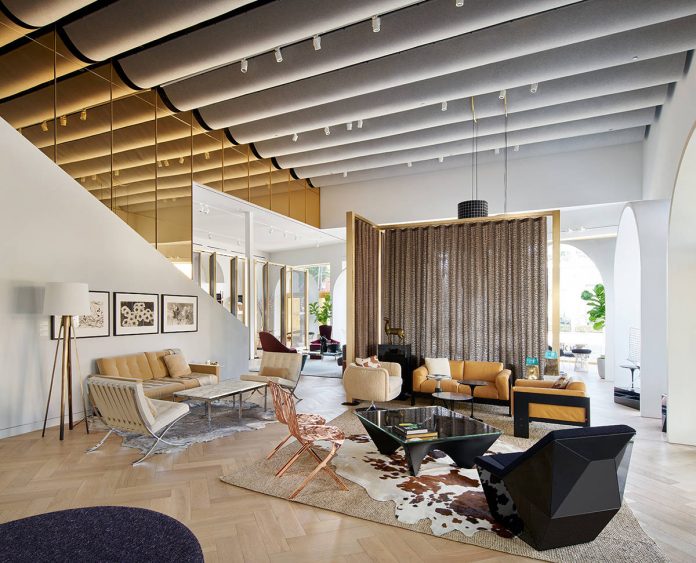 The Knoll Home Design Shop in West Hollywood, which opened in late January, serves as a reminder that it’s OK to play with the classics. In this setting, iconic pieces benefit from a fresh twist, with new finishes, materials, and fabrics that are now options when customizing designs by names such as Marcel Breuer, Harry Bertoia, and others. If you’ve coveted a Warren Platner table and chair set in rose gold, now is your chance.

The American furniture company known for its close collaboration with leading architects — David Adjaye and David Rockwell have released Knolll collections in recent years, for instance — has historically maintained showrooms in cities around the world, but with an emphasis on sale to the trade, as well as on work spaces. The first direct-to-consumer Knoll Home Design Shop opened in Manhattan near the Museum of Modern Art and the brand’s original 1938 showroom in 2013, and Los Angeles‘s robust design community proved ripe for the next retail location.

Knoll design director Benjamin Pardo worked with Los Angeles-based architecture firm Johnston Marklee and interior designer Barbara Reimelt of NinetyNineGroup to transform what was formerly a Steinway Piano showroom on Robertson Boulevard in West Hollywood. Former  Knoll president Yves Vidal‘s York Castle in Tangiers, Morocco, was the design team’s creative muse. The space is framed with a series of interior streamlined brass arches set within the building’s rectangular storefront openings. Other impactful design elements include round skylights for a James Turrell-like meditative effect, as well as the ceiling lined with FilzFelt material. The Knoll Home Design Shop is an ongoing opportunity to experiment and showcase products in various configurations, such as a cluster of pendant lamps covered with Adjaye’s collection for KnollTextiles.

This venue is also in good company, with a new Flexform showroom located next door.