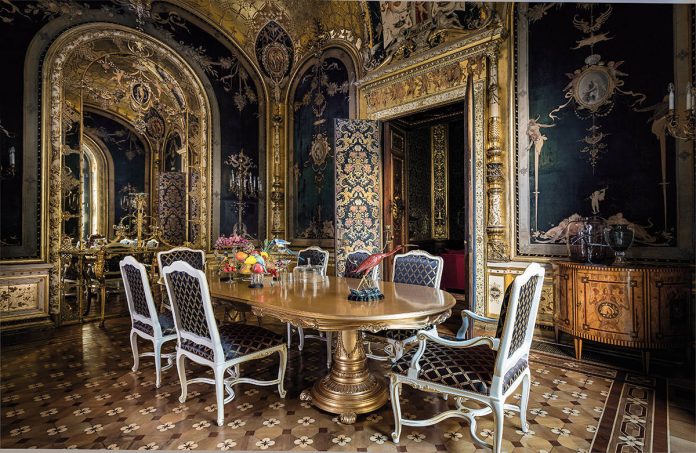 The name Heritage is borrowed from the famous museum in Saint Petersburg, which it aims to invoke and whose artistic and cultural richness it intends to celebrate. The new line from Angelo Cappellini also channels the incredible legacy of the Hermitage museum, creating an unusual interior design with a hybrid, bold character. Hermitage is all about art, eclecticism and evocative strength.

The concept for this furniture “gallery” is part of the wider project to revamp the brand image, a process embodied by the Nuance collection and captured in a photo album by the same name. The album has five chapters, one for each for each of the “expressions” that the company believes classic style can take on nowadays.

Eclettico, Hermitage, Casinò Royale, Hamptons and Bohemienne are the five interior design solutions the brand has devised to build up a comprehensive snapshot of how we live. The project is oriented at clients with very different personalities, all with their own style tastes and trends.

The various interior styles draw on the artisanal expertise built up by the company over more than a century – on collections inspired by the traditional, classical styles but now reimagined with new finishes and fabrics. Daring colour combinations and patterns that seem almost out of place in a classical setting are the common thread of all the interior solutions, which can be combined with the Opera Contemporary collection (a brand set up by the company in 2010), which puts a new slant on Nuance with its fresher, more modern feel, making for a collection where interaction and dialogue are all around.

Within this homage to change, the starring role is played by Hermitage, whose strong expressive impact was met with the best response when it debuted at Milan Furniture Fair in April. It’s no coincidence that it is set to be the centre of attention at iSaloni WorldWide in Moscow, in the heart of the culture that inspired it and at which it is mainly targeted.

The Hermitage photo story encompasses the bedroom, dining room and lounge, with the objective being to provoke thought, emotions and amazement. The settings that serve as backdrops to the new Angelo Cappellini creations are just as amazing: tapestries, paintings, engraved wood panelling, coffered ceilings, columns and capitals allow the products to effortlessly blend into the spaces, emphasising the finishing and detailing which is all still done by hand.

There are some details that move away from the traditional rules, however. In the junior suite, the headboard is upholstered in an eccentric electric blue velvet, while the armchair flaunts a floral covering and the blue/azure marble of the side table pushes the boundaries of interior design, resembling a starry sky. Furthermore, the armchairs in the dining room feature two-tone finishes, combining the standard gold leaf with bright white, while the living room is the undisputed heart of this renewed passion for interiors, offering up every possible shade and nuance of red: purple, burgundy, magenta adorn the soft furniture.

So there you have the new style direction taken up by Angelo Cappellini: an unexpected take on the classical, intellectually honest character of its creations.

The art to create rugs