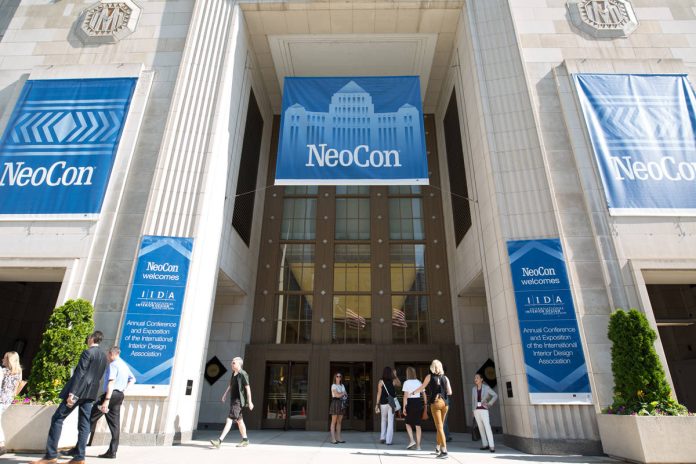 The 2017 edition of NeoCon which took place from June 12th-14th at The Mart, has set a new record of participation, up 7% compared to last year: more than 50 thousand professionals from all over the world took part in the event, with an additional 75 new companies in the list of exhibitors.

Continuous investments at the renowned location The Mart have not gone unnoticed: exhibitors and visitors appreciated the new Marshall’s Landing lounge, designed by A+I Architects and managed by DMK Restaurant Group, a meeting and relaxation area for the general public.
The 19th floor was transformed into a new destination for professionals, dedicated to talks and conferences. In addition to contributions from Arianna Huffington, founder of the Huffington Post, Jessica Green, Director of BioBE Center, and John Ronan, head of John Ronan Architects, over 100 seminars were held.

No edition of NeoCon would be complete without its popular Showroom Parties, convivial events which each year enable experimentation with new products, or simply the chance to enjoy excellent cocktails inside the building’s permanent exhibition areas, venues for unmissable special events and award ceremonies.

In addition to exhibitions and displays, there were numerous installations by leading international brands, including ASID, author of the Blueprint Lounge, BuzziSpace with its peaceful oasis in retro style, and Herman Miller who transformed the South Lobby into a must-see, with ten proposals for work interiors.

As if the numbers were not enough, countless positive comments from companies on this 2017 edition provide further proof of positive results achieved. «Once more NeoCon has given us the opportunity to make our brand grow, and we can’t wait to see what the next few months have in store for us, after winning a staggering two Best of NeoCon Silver Awards»,  Michael Dardashti, vice president of Snowsound explains. David Bright of Knoll also shares this opinion: «This has been an exceptional event, with a great response from potential customers and suppliers to the constellation of brands offered by Knoll, as well as towards workplace products of the Rockwell Unscripted,  brand, in view of the celebration of the 70th anniversary of KnollTextiles».

NeoCon East will be back November 15th-16th at the Pennsylvania Convention Center, Philadelphia.
The 2018 edition at The Mart is set to be an unmissable event, celebrating the 50th anniversary of NeoCon Chicago.