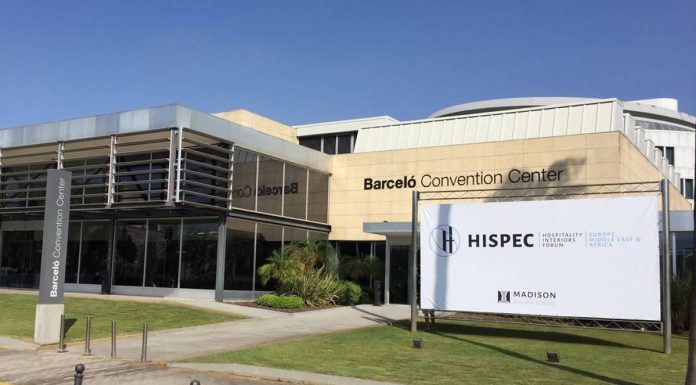 One hundred suppliers of the hotel industry and 46 buyers have discussed the potentialities and projects during the annual Hispec event, hosted, this year, by the impressive Barcelò Renacimiento Hotel and Congress Center in Seville.
Hospitality is a growing sector, increasingly attracting the interest of companies (mainly) and of the design world, but specializations in this area are now a well-established fact, the ability to offer an attentive and flexible service, as well as a high-quality product, makes the sector very competitive raising at the same time the average level of quality.

Hispec, meticulously organized and managed by the Madison team led by Juan Prados, has chosen a formula that harmoniously combines four elements: quality, pragmatism, celerity and attitude towards socialization. The two and a half days of forums are marked by brief meetings (25 minutes each, starting from 8 am), a method that breaks the ice (assuming it exists in a sector that has always favored concreteness) and allows professionals to find time for a second and third meeting during the many networking opportunities that the program proposes (dinners, team building and mini tours).
A networking path that provides a solid basis for the developing of relationships over time.

Compared to 2016 edition, Hispec has improved the procedure, selecting even more buyers and welcoming more suppliers to complete the merchandise offer.
The buyer area, which is the one that actually determines the level of the event, is of the highest quality, both from the point of view of the presence of interior and architecture firms, as well as franchises and property companies.

The Middle East share is significant and boosts economic value, with the presence of properties such as Eemar (150 million euros for the 2017 budget and 14 incoming projects for the next 18 months), Damac (with 6 upcoming projects) and the new Gulf Related of Abu Dhabi (with a 140 million budget for this year and 25 projects) or chains such as Riyada and Rotana (with respectively 3 and 30 hotels to come); from the other side architecture and interior designer such as Woods Bagot, Wilson Associates and HBA.
Europe’s hotel industry is well represented by the presence of Hilton, Accor, Barcelò, IHG, Melià and NH managers.
Design and procurement names come not only from the Middle East and Europe (with a natural predominance of Great Britain), but also from distant countries such as the United States and Hong Kong.

Hispec confirms as a successful event for the team’s ability of observing and listening to market changes and new needs, to interpret them in the creation of an event with a balanced price/quality ratio and, above all, with a vision always oriented to the future.

The universe of Paris Design Week

A new image for the Molteni Group

The design alchemy coming from Singapore