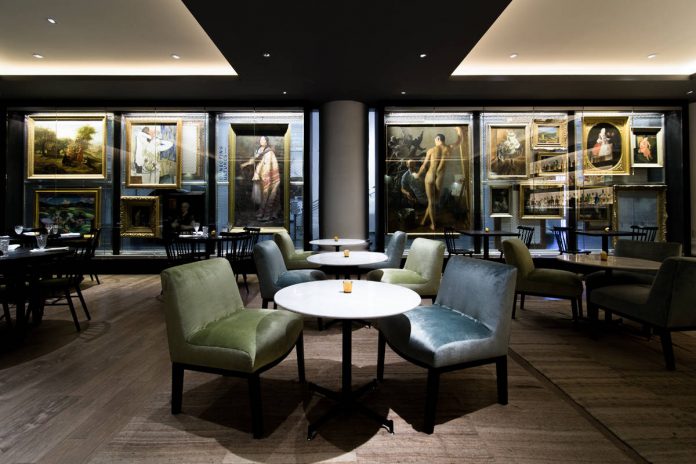 The fifth floor of the Brooklyn Museum is dedicated to American art, although only a small part of the permanent collection, which consists of around 2000 pieces, is on display. The missing works are accessible to scholars and enthusiasts in the Visible Storage ▪ Study Centre, an area for storing art works that is made accessible to visitors with the use of showcases and display cabinets. This environment, which is packed full of charm and beauty, is also the inspiration for the interior of the The Norm restaurant – opened last year in the museum by Great Performances with chef Saul Bolton – designed by Anda Andrei, Bonetti Kozerski and Design DPC. The large room, which features soft lighting and subdued colors, gives the impression that you are dining in the places that are usually invisible in museums, namely their abundant storage areas. One wall is stacked with crates for transporting artworks and the other consists of display cases crowded with paintings arranged in a seemingly scattered order: the restaurant thus becomes a continuation of the museum galleries and a conceptual extension of its content and operating mechanisms.

Even the starred chef’s menu is a tribute to the multi-faceted artistic content in the museum and to Brooklyn’s multicultural composition, incorporating Indian, Mexican, Japanese, Middle-Eastern, Caribbean, Indian, Chinese and American elements.

Clan Milano encounters the artistic imagination of No Curves