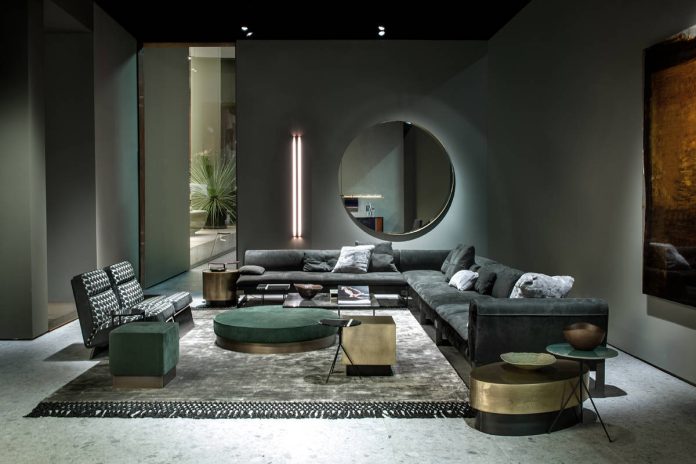 Nine years ago, it was a real car garage in the heart of Rome. Today it is a unique exhibition location that retains evident traces of its previous identity in its name and concept. The Baxter Garage, Baxter’s showroom in the capital, is the second shop owned by the company next to the equally exclusive Baxter Cinema in Milan, established in a building that once housed the historic President cinema.

There is nothing conventional about the brand. Neither in its products, nor in the atmosphere that it creates – sophisticated and metropolitan, yet informal and welcoming.

This was the atmosphere at the presentation of the new collections, which took place last night at the Baxter Garage in via Gregorio VII, traditionally known as a modern design venue in the city.

Entitled Geometrie d’Autore (Signature Geometries), the evening celebrated the brand’s signature design, in an escalation of conviviality and animated participation.

The stars of the new display are the latest interior products such as the Gemma chairs, the Greta armchairs, the Libelle bookcase and the Miami and Viktor sofas, which vie with Baxter’s greatest bestsellers: the entirely deep-buttoned Chester Moon and Panama Bold, with its modular islands.

The products come to life in independent settings, in a constant dialogue facilitated by the large exhibition area, which has no architectural barriers. «We wanted to maintain the original structure of the space – explains Paolo Bestetti, CEO of Baxter – When myself and Paola Navone came here for the first time, there were only cars and a descent that led down to the garage from street level. Paola immediately had the idea of transforming it into a showroom and of turning the old ramp into a wooden staircase that would lead to an ‘underground’ open space, enclosed by only openwork iron panels that feature her stylistic touch».

Over the years, the showroom has evolved in parallel with the brand’s stylistic evolution – whose values and aesthetics it fully reflects –, while also conveying its sense of being: it is not only a design showcase, but also a cultural venue in the city, hosting evens, themed evenings and corporate sales training meetings.

«Baxter Garage is a unique space in Rome – remarks the store’s manager, Massimiliano Travaglini – A point of reference for the public and especially for architects and interior designers who can find a complete service here for their projects».

The store’s range is expanded in line with the brand’s ‘open’ approach, also including a selection of products by Living Divani, USM, Edra and Shake.

IFDM took part in the event as a media partner.

Clerkenwell: centre of the design universe

The colors of craftsmanship