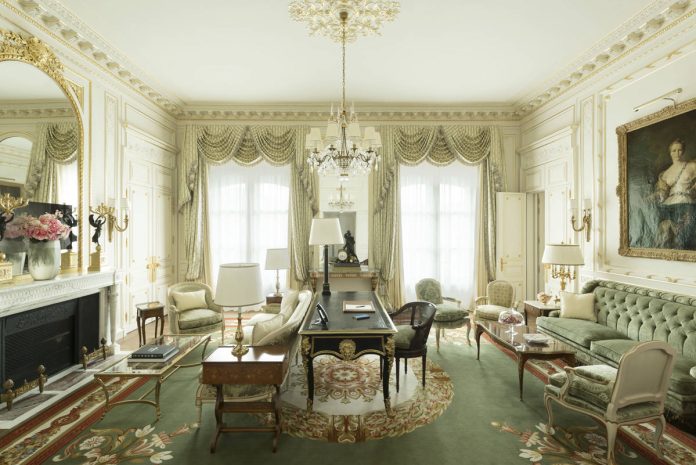 The eagerly-awaited reopening of the Ritz Paris in June 2016 was celebrated with the launch of a short film, entitled ‘Behind the Door’ and directed by Zoe Cassavetes, common practice now among major international luxury brands, which could learn a lot from the history of the legendary Paris hotel about the familiar concepts of brand identity, testimonials, influencer marketing and boutique hotels. The hotel was opened in 1898 by César Ritz, who was determined to introduce comforts like electricity, telephone and bathtub in every room, a rarity in that epoch. He saw the hotel as a ‘shop window’ where his guests could choose from among the top Parisian brands. In the latest renovation works guided by Thierry Despont, the ‘shop window’ has become the Ritz Paris Gallery: 110 metres of marble, light, 5 boutiques, 95 shop windows and the Ritz Paris Concept Store overlooking the new Grand Jardin, an oasis of trees, sounds and scents of the south of France, designed by the landscape artist, Jean Mus. The restoration is most apparent in the 15 Prestige Suites that bear the names of the illustrious guests who regularly stayed, or even lived, at the hotel, Coco Chanel, F. Scott Fitzgerald, Windsor, Vendôme, Impériale, Appartement Ritz, César Ritz, Maria Callas, Prince de Galles, Opéra, Mansart, Ernest Hemingway, Charlie Chaplin, Chopin and Marcel Proust, where original objects, now restored, are displayed along with new replicas. According the Design Manager of the Ritz Paris: “Luxury does not have the same meaning it did in the nineteen eighties (when an initial restoration was carried out under the then new ownership of Dodi Al-Fayed), dimensions play a more important role and, right from the start, the idea was to reduce the number of rooms from 159 to 142, optimising space and lighting.” These were two fundamental design elements, given the imperative to leave intact the spirit and charm of a place with a wealth of history and stories, and to comply with the regulations associated with a historic listed building. Not a simple challenge for the architects of Atelier Cos, who worked on the architectural restoration and the façade, nor for the Despont studio, which refurbished the décor, retaining the original furnishings, accessories, decorations and details (like the swan-shaped taps), nor for those who drew up the inventories of the wealth of furnishings and objects, curtains included, and placed them in 124 containers to await return to their original positions. A wait that lasted four years, complicated by a fire in the winter that damaged the roof and delayed the progress of the works, which skilfully combined exterior and interior conservation and restoration by expert craftsmen with the technological upgrading of the equipment, brought up to standard in terms of accessibility and safety and, of course, the addition of new spaces. While the hotel carefully preserves the nineteenth century decor, the marble floors, the wood panelling, the colours of the plasterwork and the upholstery fabrics, the atmosphere has been made much airier with new openings or the extended height of the communal areas, enlivened with a rich colour palette, 78 hues created with exclusive copyright by the decorative painter, Pierre Finkelstein. The new extensions, in addition to the aforementioned Grand Jardin, include a Chanel (ça va sans dire) Spa on the basement floors in a fitness centre with a completely renovated swimming pool that can be converted into a multipurpose area, made even more charming by a 180 m2, trompe-l’oeil fresco on the ceiling, the work of Pierre Finkelstein, Pascal Amblard, Stefano Luca and Jean Sablé.
A number of rooms have been added on the upper floors for events and receptions, such as the Salon Proust, near the lobby, for afternoon tea, the cooking workshops of the École Ritz Escoffier have been revived and the new Bar Vendôme brasserie has been created, while the restaurant terrace has been converted into a warm winter garden with a retractable glass canopy. The Bar Hemingway remains almost unchanged, out of respect for its celebrated customer, the history of western narrative and the art of the cocktail.