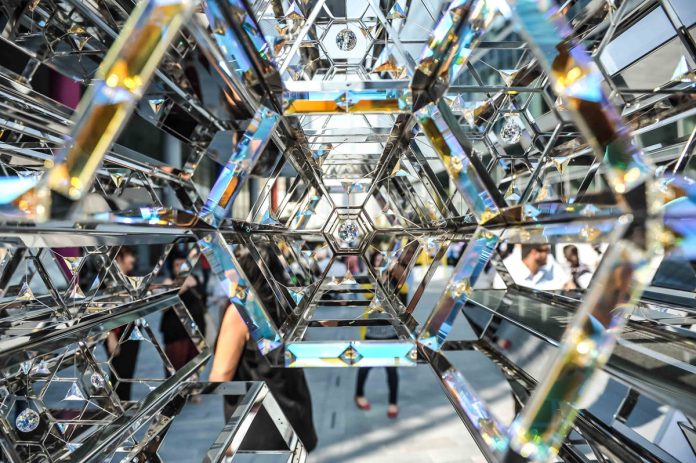 A few weeks from the official end of Dubai Design Week, there’s another opportunity to talk about the event that has warmed the creative hearts and minds of the Middle East.  The final balance has been drawn up with the numbers from the 2016 edition, staged from October 24 to 29.  In brief, a highly successful edition.
The location for the event was the newly-created Dubai Design District (or D3), an innovative section of the city intended to accommodate offices, stores, exhibition spaces, studios and galleries connected to the creative sector, primarily design, art and fashion.

This was the setting for an impressive, record crowd of 40,000 visitors, an increase of 75% compared to 2015, the year the event was launched. The cultural fulcrum of the exhibition was the Downtown Design trade fair, which doubled its visitors to around 12,500, of which 80% were industry professionals.
There was also double the number of events staged in D3 and around the entire city, reaching a total of 150 during the week.

Thanks to a full programme of events and workshops, the high quality displays of products and installations, Design Week also attracted the attention of the 45 universities and international schools, which visited the district; indeed, the 145 projects of the Global Grad Show installation came from the university world.

A completely new feature was the first Audi Innovation Award Design Contest, organised by Audi Middle East in partnership with Design Week: an opportunity not to be missed for creating innovative design solutions in order to demonstrate a “significant positive change” concerning the subject “Alternative”.

Staged with the patronage of Her Majesty Sheikha Latifa Bint Mohammed bin Rashid Al Maktoum, supported by the Dubai Culture and Arts Authority, Design Week left a wave of positivity in its wake, along with great creative and commercial ferment.  The date has already been sent for next year, from November 13 to 18. Meanwhile, the photo gallery offers the chance to relive the significant moments of the 2016 edition.