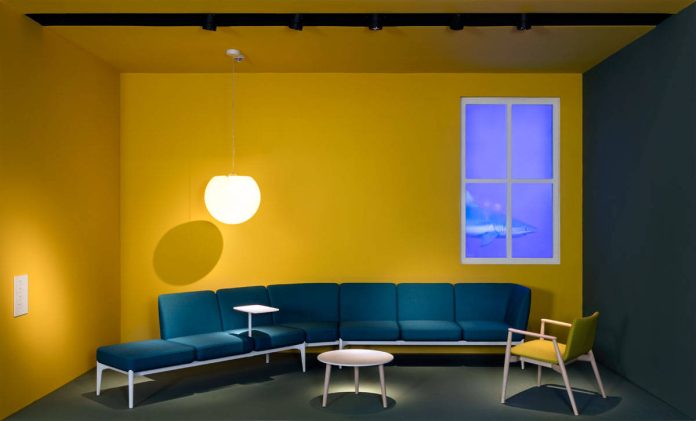 Pedrali is presenting a story in pictures at Orgatec. The story of its comfortable, familiar interpretation of the office and working spaces and of its functional, consistent production philosophy.
Many theatrical scenes and film sets seem to form parts of a concrete, everyday experience within a larger working space, distributed between two large side walls. The exhibit is designed by Calvi Brambilla.

Each frame depicts an environment: the meeting room, break area, conference room, company restaurant and waiting rooms. Pedrali’s latest collections move casually through these three-dimensional “original paintings”, emerging from the colorful, lively set design, enhanced by unexpected and surprising appearances: a shark passes eerily behind a window in a waiting area and three boats scud across the immaculate surface of a table in a meeting room. The result – and the challenge – is a humorous and surreal interpretation of the company’s furnishing solutions. You can play around and have fun with Pedrali furnishings: their versatility encompasses an inconceivable number of uses and they are inherently designed for sharing and creativity, which above all they intend to generate, simultaneously representing cause and effect.
The same products return in the centre of this gallery, ready to be tested and touched by hand, this time as simple spectators, thus reinterpreted in dark, unified tones.

The guest stars are the two completely new additions from Pedrali: Snooze, the company’s first sound-absorbing panel designed by Marcello Ziliani, and the padded Vic chair, a result of the recent collaboration with French designer Patrick Nourget, exhibited at the fair in the version with metal legs.
The first, positioned on walls and ceilings, is intended not only to improve the acoustic quality of any office space, but also to decorate and add character to the environment with a wide selection of fabrics that can be combined with other accessories.
The second combines aesthetic and functional values with a design that is both stylish and simple. Revisiting classic forms, Norguet has designed a collection of padded chairs, whose distinctive design feature is the backrest, which is raised from the seat and is only fixed at the ends, creating an opening that gives the chair a feeling of lightness and makes it easier to move.
Some of the company’s best-sellers accompany the new products, such as Social – the sectional modular system suitable both for expanded co-working and coffee for two – and the large, versatile Babila family, suitable for creating a home-office corner or creative participation work spaces.

Thanks to this varied design range, which meets the many needs of today’s business world, Pedrali has been chosen to furnish some of the most renowned international headquarters, such as the Sky Italia offices, the Copernico co-working space in Milan and the Google Campus in Dublin.

The unique leitmotiv of creativity

Baleri Italia goes back to basics

BertO: the digital side of Meda