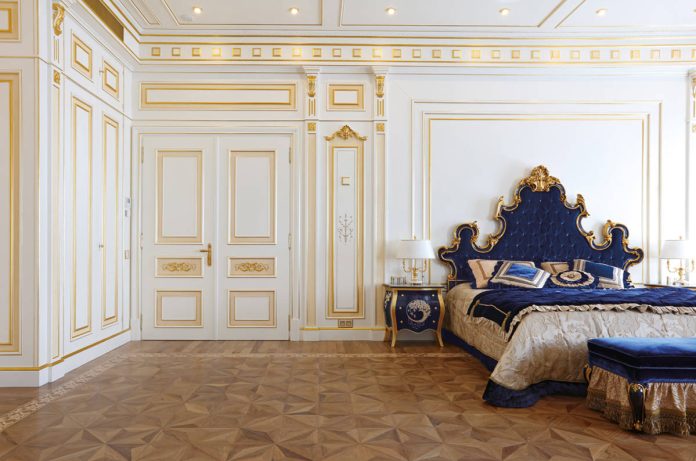 From product to design, via high quality. It’s a sentence that goes a long way to summarising the evolution of Bellotti Ezio, founded over 70 years ago and now an established name in the international classic furniture panorama. Like many in the Brianza area, which is considered the cradle of Italy’s best artisanal producers, Bellotti Ezio is a family-run company, with three different generations having guided the business through its production and stylistic evolution.

And while the early days of Bellotti Ezio were characterised by the prolific production of traditional collections (think engravings, marquetry in the Louis XV, XVI and Baroque styles and arty pieces such as Piffetti copies), the company has recently had to adapt to new market requirements, with the main result of this being a more contemporary style of product. Take the new Bel Mondo line, for example. Designed by Giovanni Luca Ferreri and unveiled for the very first time at the Milan Furniture Fair in April, it is an amalgamation of more neutral colours, unusual woods, chrome and polished brass, the fluid combination of wood and metal.

The second facet of Bellotti Ezio’s evolution has been a move towards a more design-centric approach: «Over the years, we’ve specialised in made-to-measure production, not in terms of a single piece of furniture, but entire interior design projects – explains Donatella Bellotti, part of the current Bellotti generation – Given that we’ve always based our business around craftsmanship and local production, it wasn’t a difficult step to take». Exclusivity, yet also flexibility, are thus key buzzwords in this current design philosophy.

Bellotti Ezio has designed for buildings in a vast array of locations, from Russia, Ukraine, China, Equatorial Guinea, Ethiopa and other African countries to the biggest European capitals via American hubs such as New York and Miami. This diversity of destination is more than matched by the sheer variety of spaces now housing Bellotti Ezio designs: government palaces, hotels, private residences and many more besides. «Residential has definitely been the most consistent sector in our contract production business – continues Donatella – It’s an area within which we can really mix it up in terms of the type of solutions, furniture, styles and decorations we employ».

There’s no better example of this that one villa the company has just completed in Russia: it spans 1500sq m spread over four floors, with 1500sq m of wood panelling and 850sq m of ceilings in 14 different rooms (including a bar, kitchen, billiards room, wine cellar, walk-in closet, bedrooms, bathrooms, dining room, cinema) in addition to two suites, a hall and an attic.
The entire villa is made in the Neoclassical style, with a range of finishes and marquetry, including lacquer, gold leaf, briar-wood with marquetry or myrtle root. Equally stunning is a central Moscow attic whose wood panelling is an exact replica of that found at the Hermitage Museum in Saint Petersburg. «It was an ongoing, three-year project which required a lot of research, care and hard work, but it certainly represents the very pinnacle of our production capabilities».

Luxury in the world according to Armani

London: the new showroom by Turri