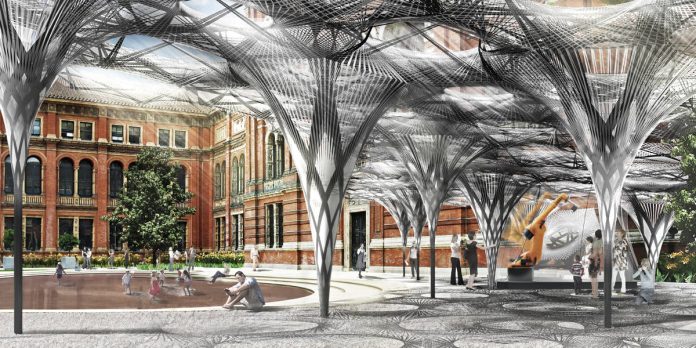 The V&A is certainly a mandatory step within the London Design Festival’s tour; an unmissable appointment that houses a broad range of events and exhibitions; a central hub where art and design freely coexist. Also for 2016 the London Festival confirms its unique collaboration with the world’s leading Museum of art and design, filling it with installations, events, talks and workshops within a creative project which aims to let the visitors discover new technologies and stream new interior ideas.
“As the established Festival hub – explains Dr Martin Roth, Director, Victoria and Albert Museum – we look forward to encouraging contemplation and dialogue between a series of remarkable installations in the Museum and our world-renowned collections, showcasing new ideas, technology and materials and hosting an eclectic programme of talks and workshops during this 9-day period of discovery.”

Among the projects, stands out the The Green Room signed by the London-based design duo Glithero, founded by British designer Tim Simpson and Dutch designer Sarah van Gameren, supported by the Italian luxury watch maker Panerai. Emulating the circular motion of the arms of a clock, The Green Room is both interactive and performative. The space will be delineated by veils of colourful strings, with hues blending into each other, creating an optical effect. The strings will be lifted and then dropped by a motorised revolving CAM arm, prompting visitors to methodically travel through the immersive installation.

Benjamin Hubert  designs Foil: a 20-metre-long undulating ribbon comprising 40,000 individual metallic elements which will run down the entire length of the room. The ribbon will move continuously and dynamically in a wave formation, reflecting and scattering light around the gallery.

Liquid Marble by Mathieu Lehanneur is a sculptural piece created combining advanced digital and man-made methods of construction. Designed using 3D software, an expanse of black marble is digitally sculpted and then polished by hand to achieve a highly reflective surface. The piece is intended to evoke waves with a liquid appearance that resemble fossils in solid marble.

The V&A Engineering Season highlights the importance of engineering in our daily lives and consider engineers as the ‘unsung heroes’ of design, who play a vital and creative role in the creation of our built environment.  A newly-commissioned Garden installation by experimental architect Achim Menges with Moritz Dörstelmann, structural engineer Jan Knippers and climate engineer Thomas Auer will launch the Season. Their first ever public commission in the UK, Elytra Filament Pavilion (18 May – 9 October 2016), will explore the impact of emerging robotic technologies on architectural design, engineering and making.
The first major retrospective of the most influential engineer of the 20th century, Engineering the World: Ove Arup and the Philosophy of Total Design (18 June – 6 November 2016) focuses on the design philosophy of Ove Arup, the pioneer of a multidisciplinary approach to design that has defined the way engineering is understood and practiced today.

Do not miss, Unidentified Acts of Design exhibition, that highlight instances of design intelligence occurring in Shenzhen and the Pearl River Delta outside of the conventional notion of the design studio.

A chair for Better Living

Putting the product in the centre