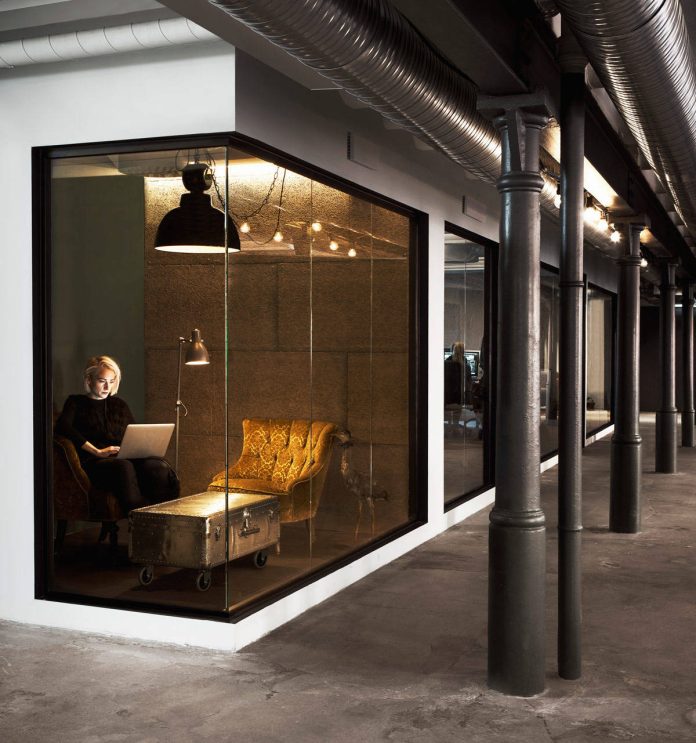 We wanted our office to look like a second home or our favourite bar, a place where we want to spend more time, socialize with our colleagues and listen to music. I am convinced that the office plays an important role in our company’s ability to attract talent,” explains Felix Edwards Mannheimer from Epidemic Sound. Musical talent, since Epidemic Sound deals with the production and sharing of music, as well as architectural design talent. They commissioned White Arkitekter with the design of the extension to their Stockholm office.

White Arkitekter is a leading firm of Swedish architects, whose philosophy is primarily based on the empathetic relationship between people and spaces, as well as on sustainability principles. ‘Reuse’ is the key word underlying the interior design concept that has expanded the company’s headquarters to a whole new floor: large areas (825 sq m) of the building, which was formerly a brewery, have been restructured, preserving some of the features and atmosphere of an artisan work space. The furnishings are also recycled, including IKEA pieces or vintage furnishings bought at auction. Such as the leather sofas or fabric chairs, chests and tables, chairs and lamps used to create small, informal working, meeting or break areas, as well for equipped areas with desks and seating for a more traditional office. Both the more ‘technical’ and almost domestic decor harmoniously coexist in an unconventional working environment – a large open space that nonetheless contains, in a well-defined area, small offices with glazed partitions, which allow privacy and quiet for meetings, interviews or listening to music. The versatile layout of the floor also provides extra space for a growing number of staff and the possibility of reconfiguration in the case of future expansion. The fixed points in the site are the staircase between the two floors, which is also visually connected by a large opening in the attic, and the columns, which have been preserved from the original building.

The under ceiling was removed to increase the height of the space, revealing the building’s mechanical systems. This has all been done to emphasize the building’s industrial character.

The Epidemic Sound’s office is part of the collection Contract&Hospitality – Spring/Sumer Book 2016 by IFDM, also available in digital version.

Wood-Skin technology and the force of Union

From retail to design