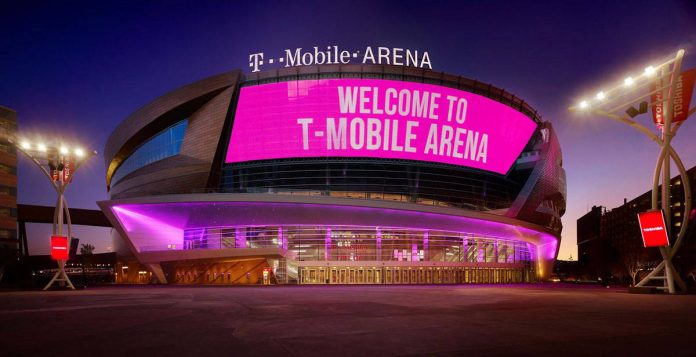 The T-Mobile Arena has only been open for a month, but it already stands out as one of the major entertainment centers on the Las Vegas Strip. Located in the most famous street in the city, renowned for its high concentration of hotels and casinos, the latest architectural creation in Las Vegas is designed to host a great number of events including concerts, shows and sports events, offering a new entertainment experience.

This is the aim of Populous, the firm that designed the project, a joint venture between MGM Resorts International and the Anschutz Entertainment Group (which also built the Staples Center in Los Angeles, L.A. Live and the O2 arena in London).

20,000 seats, 375 million dollars, under construction for two years: these are the figures behind the new multifunctional center, officially inaugurated on 6 April 2016, with a concert involving music stars linked to the city, such as The Killers and the legendary Wayne Newton.

Work began in May 2014, starting with the demolition of an existing building. The Populous firm transposed the most distinctive characteristics of the surrounding countryside (the desert and the Spring Mountains to the west and the sparking Las Vegas Boulevard to the east) to the outer structure of the project, combining contrasting influences in a dynamic design.

In keeping with the city’s lively atmosphere, a large glass façade with an LED coating welcomes the public; large balconies that overlook Park Avenue (formerly Rue de Monte Carlo) and a stage for outdoor performances capture the identity of the location.

These contemporary facets are combined with the natural influences of the area, expressed in the south and west facades with a coating that protects the elliptical building; a coating formed from undulating metal strips in different colors that evoke the sedimentary layers of desert mountains, a design that is also repeated inside.

The T-Mobile Arena is part of a wider project to create a community that also encompasses the New York-New York and Monte Carlo resorts, via The Park, an outdoor area (which cost over 100 million dollars) for dining and entertainment.

The Arena schedule is already packed with unmissable events for music and sport lovers and is being considered as a possible home venue for a National Hockey League team.

An immersive narrative of design

UGC Vélizy, the world of images

In Los Angeles, a hotel that combines an urban vibe with...