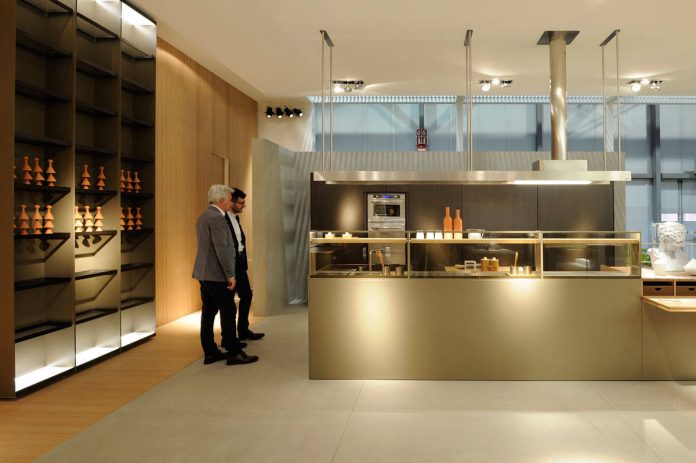 Although traditionally stronger on the domestic market, Italian kitchens and bathrooms now look to be generating better results overseas. And rather than emerging or exotic-sounding countries, both sectors are seeing their biggest increase in sales in the United States.
Kitchens have felt the effects of the crisis more than other furniture industry sectors. This is mainly because out of all Italian-designed products, kitchens have traditionally had less success on the export market – which of course is the first port of call for furniture manufacturers experiencing seeing their domestic sales vanish. However, in 2015, kitchens saw the start of the kind of trend reversal already registered by the wider Italian furniture industry, resulting in some surprising results in one sector in particular: the export market. Indeed, according to ISTAT data gathered by FederlegnoArredo, exports of kitchen furnishings grew by 10% between January and September 2015. There was also a record-breaking 78% leap in the export of kitchens to the United States, while exceptional increases of 38.6% and 39% in the United Kingdom and China respectively were also recorded. Moreover, an expected 3% increase in overall sales in Italy for 2015 is a good sign, one that illustrates the effect of incentives on furniture purchases, an initiative that has been extended to 2016. This year, if they are to build on these green shoots of recovery, kitchen producers must find their way through the many dark clouds currently lingering over the global panorama, including the tribulations of a sanction-hit Russia, the slowdown of growth in emerging countries and the generalised instability triggered by conflicts and terrorism around the world. One solution, suggested by Assarredo president Giovanni Anzani, could depend on the sector’s ability to get involved in large-scale real estate projects, an area on the up that is currently the subject of significant investment. The prospects for 2016 are positive and the big names in the Italian kitchens industry will surely try to grasp all of the opportunities that arise, making full use of their networks of flagship stores, showrooms and commercial headquarters in markets of strategic importance.
The Italian bathrooms sector is also looking to focus heavily on overseas sales, in line with its international reputation. According to a study undertaken by Centro Studi Federlegno Arredo Eventi Spa/FederlegnoArredo, the United States, France, Turkey, Spain and the United Kingdom are among the countries where the biggest increases are expected. Indeed, exports to the USA have demonstrated significant growth in recent years: in the first quarter of 2015, for example, there was a 29.9% increase. The forecast for the export market looks good for the coming years too, especially if the Italian bathrooms sector can make the most of the American construction industry’s expected growth of 4.9% per year until 2020. Over the course of 2016, the focus is bound to be on the global market, thanks also to Federlegno Eventi and Assobagno B2B events, which enable Italian companies to make the most of their links with countries where our design style – high-end included – is popular: aside from the USA, some of the stand-out names are Japan and – above all – Iran.
In terms of curiosities and new trends for the bathrooms sector in 2016, it’s worth pointing out the return of bronze, a material that seemed to have been left behind but is now regaining popularity among architects and designers, at least as regards complementary furniture and accessories, especially fittings.