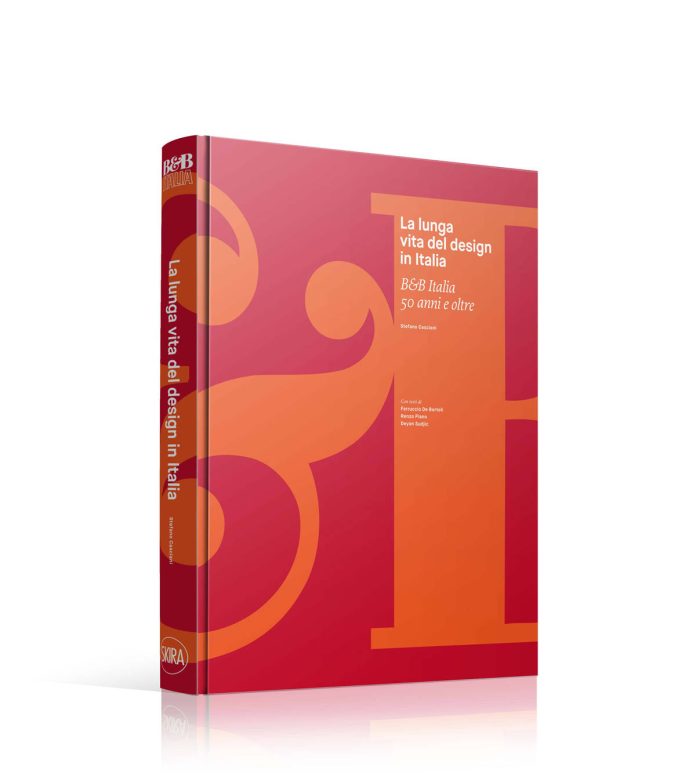 The Long Life of Design In Italy. B&B Italia 50 Years and Beyond (La lunga vita del design in Italia. B&B Italia 50 anni e oltre) is the new book of B&B Italia, published by Skira during the 50th anniversary of the company. With a wide and complex design training, the volume has been presented at Triennale di Milano – on Tuesday, April 5 – where it will be on advanced sale at the Triennale bookshop until April 17 (available in the bookstores all over the world starting from September).

The 360-pages book, splitted in four chapters, is edited by one of the most authoritative narrators of design and architecture, Stefano Casciani. It will be richly illustrated with contributions from Renzo Piano (the architect of the B&B Italia Headquarters, which was built in 1973), Deyan Sudjic (Director of the Design Museum in London) and  Ferruccio De Bortoli. On the presentation’s stage also the historic editor of Corriere della Sera, together with the curator, the Art Director Antonio Citterio, the architect Mario Bellini and the brand’s President Giorgio Busnelli.

The style is agile, able to narrate both projects and products of international architects and designers, developed since 1966 by the founder Piero Ambrogio Busnelli and continued by his sons.

Other collateral initiative during the anniversary is the exhibition B&B Italia/The perfect density, projected by Migliore+Servetto Architects. Impluvium area inside the Triennale di Milano hosts interactive installations – April 2 to 17 – about the concept of density as cross feature of B&B Italia. Phisical and conceptual qualities of the product, but also ideas able to project the company into the future, those are the connection to density. Not accidental the location: in fact, the International Exhibition of Triennale di Milano celebrates its 21st edition through the theme 21st Century. Design After Design.

Last but not least, the movie B&B Italia. Poetry in the shape. When design meets industry, born from the synergy and teamwork with 3D Produzioni/Sky Arte HD and projected during IMM Cologne; the documentary aims to a passionated and professional, illustrating the company’s experience.

Loro Piana Interiors and Raphael Navot: the future is soft

The future is young

Marzotto Interiors: a new style story that is over 100 years...