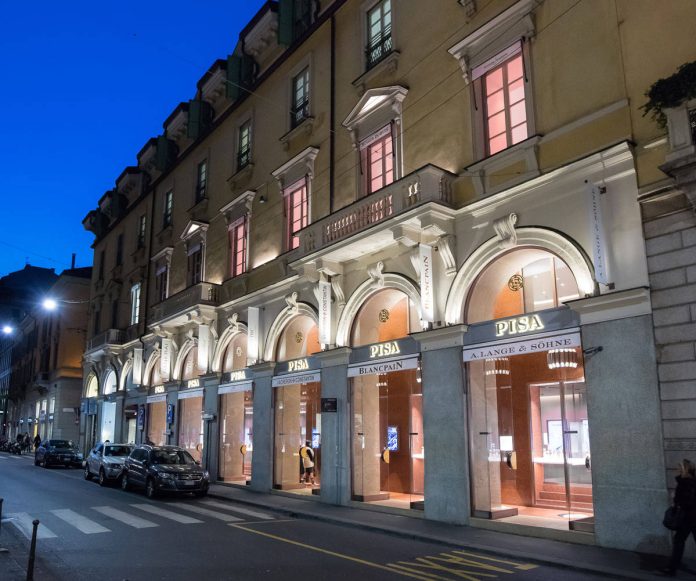 The new Palace of Haute Horlogerie emerges on via Verri 7. 1,200 square meters in the heart of  Milan’s Quadrilatero district, in a historical building that dates back to the beginning of the 1900s. The new Pisa boutique is modern, with an international flavour, and it delves deep into the world of watches and luxury, while maintaining its string family identity constant.

The new shop was inaugurated yesterday, the 23d of March, and success with the public was extraordinary. The echo of the previous multibrand Pisa store is revived and expanded in the Pisa Orologeria Flagship Store, dominating over via Verri with its three stories looking over via Montenapoleone, Corso Vittorio Emanuele and Corso Matteotti. This significant intervention was designed by Pisa Group’s former art director, Antonio Vittorio Carena.

In addition to the excellent brands offered, including Cartier,  the concept of the boutique includes top level after sales and customer support services and a full calendar of events which turn the second floor into a multifunctional space.  Even the laboratory will be open to customers who, for the very first time, will be able to meet the specialised technicians and follow the work done on the products.

“We decided to concentrate our activity on Via Verri in Milan, where our story began, In a city that is so dynamic and attractive internationally, we strive to be the spokespeople of a universe of many aspects and new areas to discover and communicate”, says Chiara Pisa, who, together with Maristella Pisa– the third generation in the field – leads the company with an entirely feminine dynamic.

75 years have passed since the first Fratelli Pisa stored opened right here on via Verri; over these years, the identity of the Group grew stronger, as did its presence in Milan (in addition to the Flagship Store on via Verri, the  Rolex boutique, the first single brand store in Europe, is at Via Monte Napoleone 24, and the first ever Patek Philippe boutique in Italy is also on via Verri). A reflection of this evolution is seen in the  restyling of the brand logo, with the name and date of establishment separated from the geometrical labyrinth (symbolising the mechanism of a watch), an image also present on the floor in front of the new boutique.