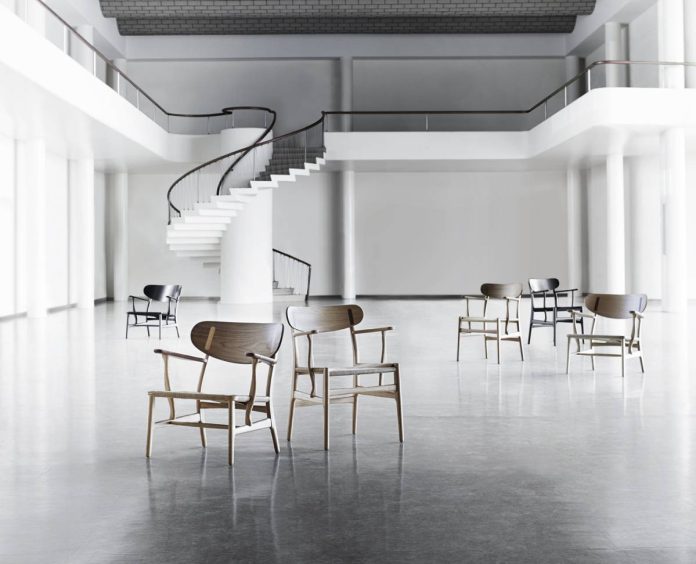 Carl Hansen&Son has recreated one of Hans J. Wegner’s early designs: the 1950 CH22 lounge chair, which bears the first actual model number from the first joint collection between the innovative designer and the Danish furniture manufacturer. Wegner’s debut collection featured iconic chairs that have achieved classic status the world over. It also inspired Wegner’s previously unknown CH26 chair design, which until today has never been produced.

Hans J. Wegner is undoubtedly one of the most original and influential furniture designers Denmark has ever produced, and Carl Hansen&Son’s reintroduction of the CH22 lounge chair – one of Wegner’s early designs – emphasizes his talent for designing and constructing wooden furniture.

The CH22 was the first model in Wegner’s debut collection created exclusively for Carl Hansen&Son in 1950 – a series that also included such iconic designs as the CH24, better known as the Wishbone Chair, and the elegant CH25 lounge chair. The designs clearly illustrate Wegner’s ability, even early on in his career, to simplify a construction until it is distilled down to its essence and is full of character.

In designing the CH22, Wegner also created a blueprint for transforming the lounge chair into a dining chair – a design that has never been manufactured and was evidently not even produced as a mockup. This previously unknown design, with the model number CH26, bears a striking resemblance to the CH22, sharing many of the design elements so characteristic of Wegner: organic shapes, bold backs, light-colored wood and woven seats.

The CH22 and CH26 are available in solid oak and walnut as well as a combination of these wood types, with various finishes.

Natuzzi Italia: a world of comfort waiting to be discovered

The executive rigour of the new Nahoor lamps