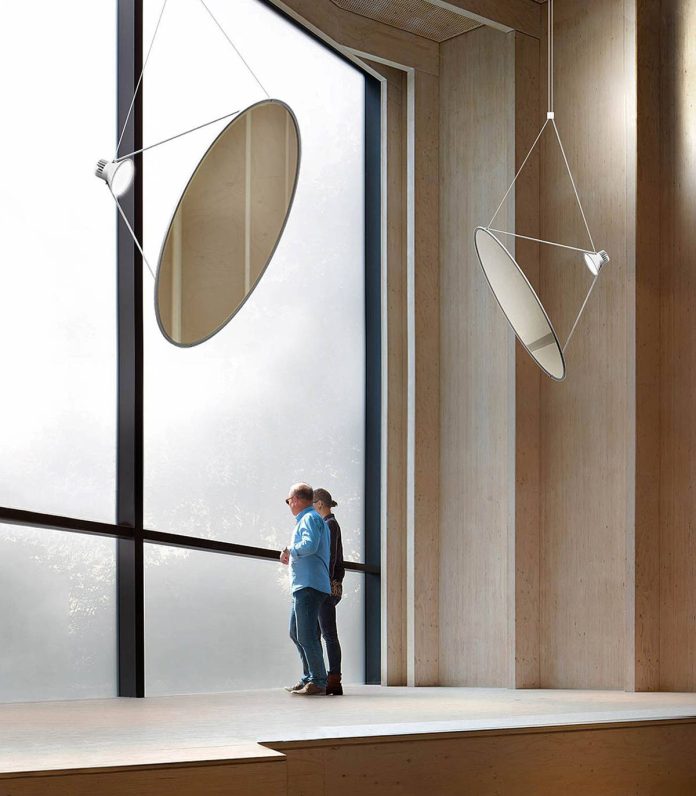 A lighting fixture that combines technological innovation with contemporary aesthetics and perfectly reflects Luceplan’s soul. Amisol is the latest creation by Norwegian Daniel Rybakken, one of the most acclaimed light designers of the moment, and it will be presented by the company during the Designers Saturday Oslo from September 8-10, 2017.

A collaboration between the Italian brand and Rybakken, that has flourished for many years creating iconic pieces such as Counterbalance and Ascent, winners of the Compasso d’Oro in 2014 and 2016.

Pieces where the idea turns into something that can be shared and used by everyone thanks to the essential contribution of technology. Just like Amisol, a furniture element between design and art, with a decorative soul that conceals an outstanding technological complexity. A suspended chandelier that occupies a large physical space with a limited volume, easy to direct in space, and whose structure is available with a translucent white film or a metallic mirroring membrane, placed on an aluminum circular disk on which a light source, connected by thin wires, projects a beam of light. By modifying the length of the connection points of the two supporting wires, the rotation of the disc can be set at any angle.

Alongside Amisol, several official catalog products and some recent pieces such as Mesh by Francisco Gomez Paz, Diade by Monica Armani and the company’s icon, Constance, will be presented at the Oslo showroom in an elegant new brass finish.

A cascade of light in memory of Zaha