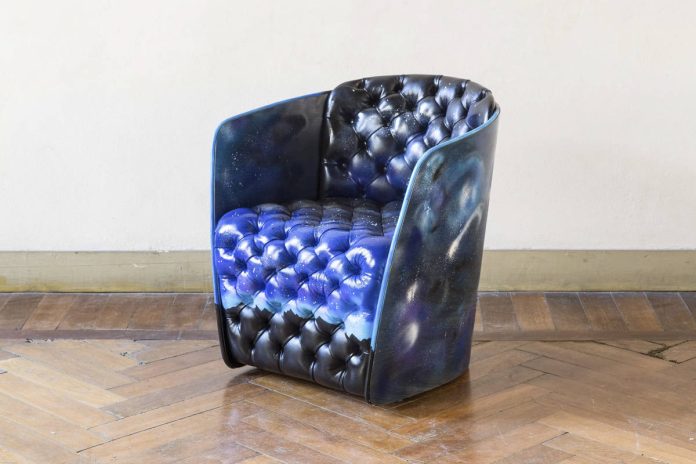 Shades of blue gradually fade on the volumetric surface of the Sir armchair by Nube drawing a cosmic universe characterized by deep suggestions. Therefore the thought of the artist Cinzia Defendi moves to the physical reality of the living and spiritual sphere.

The concept behind the artistic work can be summed up in the phrase “The private habitat as the centre of our universe”. The reflection extends to broader fields that involve the current domestic system and the culture of living, where new customs, functions and emotions emerge in engagement with the contemporary.
Prompts and literary references are embedded in the unfolding design, generating unexpected sources of inspiration for the artist: from the celestial vaults and nine heavens of Dante’s Paradiso, to the “Laudato si” Encyclical Letter of Pope Francis on the care for the shared home, where he says “In this universe, composed of open systems that engage in communication, we can discover countless forms of relationship and participation”; or in IFDM’s invitation to the project, when it identifies the habitat as “a privileged place where the functions of use meet the functions of aesthetics.” If the home becomes the heart of our personal universe, here then is an article of furniture acting as the bulwark of this domestic intimacy, focusing upon itself the infinite spaces of the sky.

Meta-Sensible, the style of our time

WantedDesign @ Seaport Studios, not only events