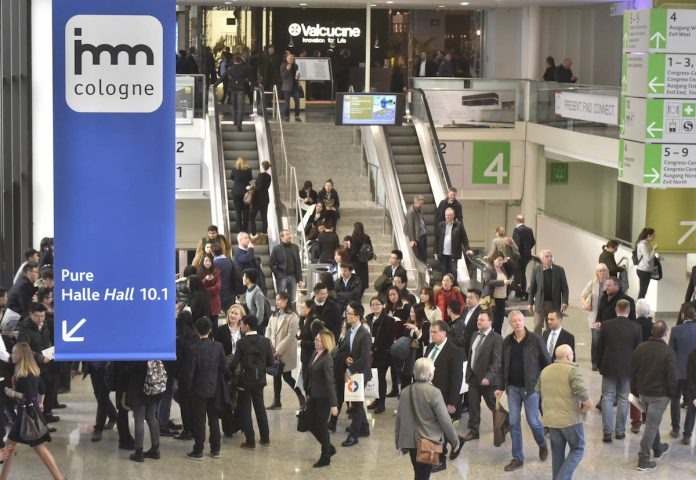 The international trade fair calendar has officially kicked off with Imm Cologne, which began on Monday and is capturing the attention of the German city and indeed the entire European market.
Imm is an unmissable event for industry professionals, giving companies, designers, architects and trade operators – including both resellers and customers – the chance to forge ties with international brands, take a look at new products with their own eyes and formulate strategies for the coming months.

The opening days of the event have seen huge numbers of visitors flock to the ten pavilions, with over 1200 exhibitors to discover. This year, Imm is also hosting LivingKitchen, the biannual kitchens event which this year features record numbers of Italian brands. The early figures look set to hold through to the final day on Sunday 22 January, but organisers Koelnemesse do hope to surpass the 2016 figure of 120,000 guests from around the world.

Imm’s stature within the interiors industry had been confirmed long before the event itself opened its doors, however – the huge list of companies wishing to attend meant Koelnemesse had plenty to do to accommodate them all.

And while the majority of the new collections will be held back for the Milan Furniture Fair in April, Imm offers visitors a taste of the originality and innovation at work within the industry, something particularly apparent in the sheer range of fabrics, finishes and materials used to add gloss to bestsellers and iconic pieces.

Take Giorgetti, for example – the brand has taken this opportunity to unveil its fresh outdoor collection Open-Air. Cassina, meanwhile, debuts the new display format set to be adopted in all its stores from this moment forward, and MDf Italia marks the tenth anniversary of its Sign chair with a new metal version named Sign Filo. It is, quite simply, a gem of a piece.
There are celebrations afoot for B&B Italia too, with the brand using the Cologne event to mark ten years in the outdoor sector with two new products from Antonio Citterio. The Novedrate-based company has also chosen Imm and LivingKitchen to unveil its new partnership with Arclinea (in which it holds a majority stake), placing a kitchen display at the heart of its stand.
Continuing on the kitchen theme, Poliform and Varenna are showcasing their usual stylish creations in pavilion 11.
We hope this sneak peek at the best of Imm wets your whistle for the year ahead – there’s plenty to look forward to between now and April.

The power of repair

A summer of lightness, with Pedrali