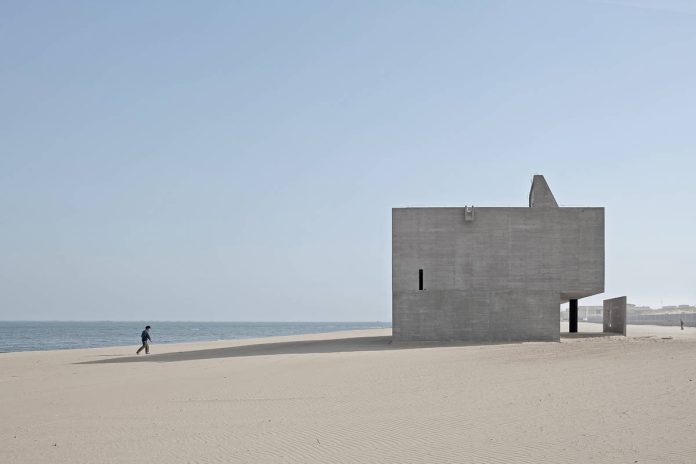 The ocean, the alternation of light and dark, the passing of the seasons, the sound of waves and the sea air define this building, along with its books and the community that frequents the library. The entirely concrete building has a brutalist look, with clean volumes and bold cuts in the walls. Architect Gong Dong, who designed this isolated temple, which can only be accessed from the beach, took inspiration from the work of visual artist Andrew Wyeth, often called the painter of silence.

The eastern facade faces the ocean and differs to the back due to the presence of openings and glass surfaces, in contrast to the thin slits that interrupt the uniformity of the western façade. The project, which alternates the warmth of wood and the coldness of cement inside, includes a reading area, a meditation area, a space for activities, a bar and a relaxation area.

In the reading area, on the ground floor, when the weather is good, the ocean and the landscape enter through the openable glass walls. On the upper floor, a horizontal window crosses the whole surface and frames the sea.
The ceiling is half-vaulted and features circular openings with a diameter of 30 cm. During the spring, summer and fall, from 13.00 to 16.00, the sun and air penetrate through the holes and become part of the space, creating interplays of light and shadow and ventilating the space.

The reading room and mediation area were designed alongside each other, but while the first is distinguished by its luminosity and opening towards the outside, the second is more introverted, private and dark, as its function requires.
There are only two 30 cm openings in the second, along the entire eastern and western wall, one horizontal and the other vertical.
The first captures the rays at sunrise, the other captures the sunset. The roof, which descends in a curve like a wave, has a terrace from which you can listen to the sea without seeing it.

The activities room was designed to be isolated by an external triangular platform that acts as a filter between this space and the quiet areas for reading and meditation. The light enters from an eastern and western strip window and since the celling has different inclinations, light and shadows produce alternating scenes over the course of the day and the seasons.

Outside time, on a peacock-colored sea