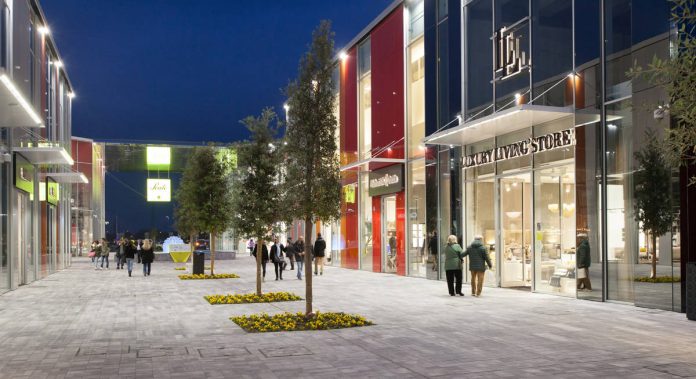 The ribbon-cutting ceremony has been held for Scalo Milano, the first shopping district that combines the three engines of Made in Italy excellence – design, food and fashion – in a single location with an innovative concept.
A few days from its inauguration (October 27), the number of visitors has already far exceeded expectations, clocking up more than 150,000 shoppers.
A key factor is certainly the uniqueness of the project – developed by Lonati Group and Promos, also responsible for its management – which is presented as a real district, fully integrated in the urban fabric. The City Style District is located in Locate di Triulzi, south of Milan, in an area once occupied by the Saiwa factory (until its closure in 2004).
An investment of 200 million euros was made to create the largest Design District in the world, 25 million euros of which were for environmental upgrading works and infrastructure improvements in support of the local area.
The area’s industrial past (Saiwa was a jewel in the crown of Italian business from ’69 until its closure) finds a strong echo in the new identity: contemporary facades inspired by factories, combinations of glass materials, reflecting surfaces and steel.  The project was designed by Cotefa.ingegneri&architetti, while the artistic direction of the facades and the street furniture was the responsibility of the Metrogamma Milano studio.

Not just that. With its 130 stores scattered over a gross commercial area of 30,000 square metres on a single floor (figures destined to double when it reaches full capacity), alongside 130,000 square metres of green areas, Scalo Milano intends to created 1,500 jobs, once at full capacity.
This is another innovative aspect of the project: a format based on the variety of the offer, which brings together the best of Made in Italy in terms of design, fashion and food (to which the entire Food Village is dedicated, the geographical heart of the project in the central area on the lower floor) and, why not, art and culture: for the first time in a commercial district, different forms of contemporary art will be displayed, from site-specific exhibitions to performance, from photography to street art.

Within an area of 295 square metres, Poliform has a prominent showcase inside Scalo Milano: its offers for the living room and night area alternate with Varenna kitchen solutions in settings that proclaim the corporate philosophy and its interpretation of contemporary living.

To celebrate its second store in Milan (in addition to the one in Via Durini), Natuzzi Italia has created a special edition of its iconic Re-vive recliner, entirely covered in Siena leather in an intense shade of yellow, a tribute to the iconic colour of Scalo Milano.

The creative, ingenious and expressive solutions of Calligaris are accommodated in 300 square metres and display a range of compositions and materials.  The new products can become the outstanding features of any room as part of a set up, or on appropriate platforms that emphasise the design, alongside icons and reinterpretations.

Scavolini Store Scalo Milano houses the latest products from the brand’s Kitchen, Bathroom and Living Room collections.  The opening of this store further reinforces the company’s presence in the country, with more than 110 single brand stores throughout Italy.

An atmosphere of modern simplicity defines the Cappellini store: the iconic products of its collections for living, dining and night zones are combined in real domestic environments.  The setting recalls the brand’s international stores: floors in natural wood, walls clad, in part, with original blue stucco and, in part, with special, putty-coloured, lime-based paint to give an almost spectacular appearance to the settings.

Baxter, from IMM Cologne to Maison&Objet

Henge, the world via London