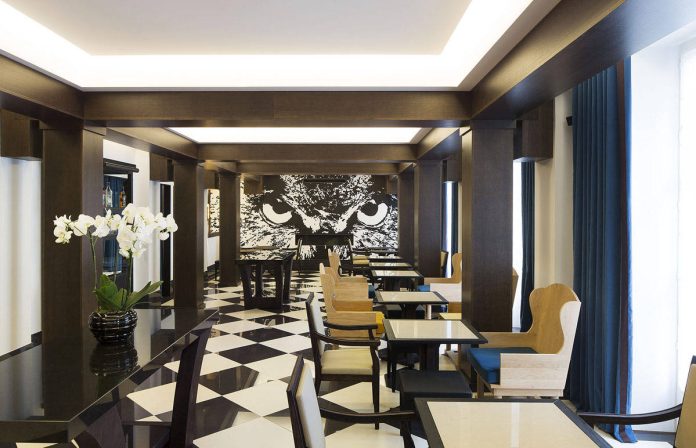 Between 2014 and 2015, the designer duo Gilles & Boissier completed design projects for a number of hotels, including the spectacular Four Seasons Mexico City, Mandarin Oriental Marrakech and the Baccarat Hotel New York, along with The Chess Hotel, their first hotel in Paris, which has a more intimate creative character and a calmer, more measured interpretation of luxury: «We wanted to convey a sense of calm and silence in the design».

Luxury is also intended as an opportunity to enjoy a comfortable retreat and a ‘pause’ from the relentless commotion that characterizes the smallest and densest – in terms of its urban layout and buzz of activity – Parisian arrondissement, the 9th.
The hotel is located close to the Opera in the neighbourhood of Les Galeries Lafayette, the Printemps, theatres and cinemas, as well as the stock exchange, banks and grand hotels. Set in a Haussmann facade with five windows in the Rue du Helder, which evokes the world of nineteenth century literature, is the discreet entrance to the hotel, which, located on the first floor, is far from ostentatious. Instead, its true character emerges inside, with a chic and intimate atmosphere in fifty rooms and in the communal areas, elegant and essential furnishing that demonstrates the minutest attention to detail and graphic decoration by three contemporary artists.

In their search for ‘silence’, Gilles & Boissier have not favoured one particular theme or style in their interiors, opting for a kind of sophisticated neutrality, composed of colour, fine materials and comfort. The exception is the black and white checkerboard pattern, dedicated to the name of the hotel, on the floor of the lobby and the mosaic finish in the bathrooms.
They began by taking a tailored approach to the design of the spaces and entire collection of furnishings and accessories, from beds to lamps, from curtains to console tables and cabinets, and they continued by gracefully mixing pastel colours and different materials. Persian blue, ice blue, slate grey and blue-tinted plaster, light grey and burgundy earth, mustard and earth yellow. Solid, natural and dyed oak, and even Nero Marquina marble and white Carrara marble in the bathrooms, linens, velvets and coated bronze.

There is a dominant colour for every floor and frescoes by various artists on the walls all over the hotel: the lobby features the giant mesmerizing gaze of Victor Ash’s owl, while the courtyard has plant motifs by Cyprien Chabert and the entrance displays abstract work by Alix Waline.