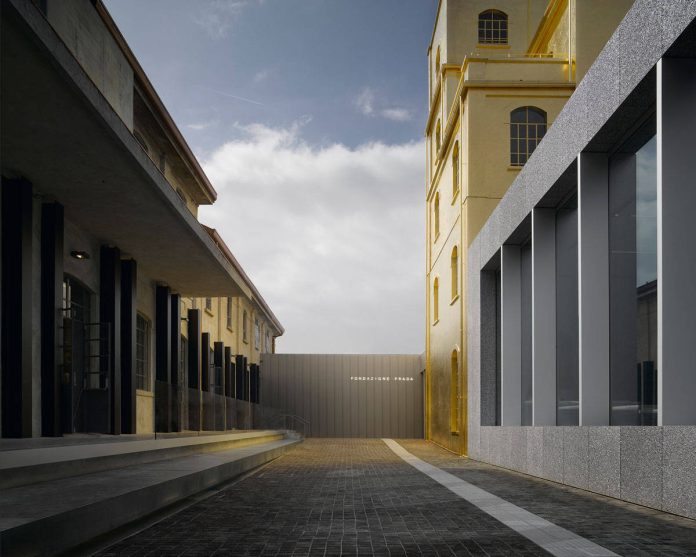 Running along parallel lines to its Venetian location in the 18th century palazzo of  Ca’ Corner della Regina, the Prada Foundation, situated in Largo Isarco in the southern part of the city, has opened the doors of its new Milanese premises to the public.  Developed by the Dutch firm OMA, founded by Rem Koolhaas, the project is characterized by a complex architectural configuration which spans a surface area of over 19,000 square metres, adding three new blocks – Podium, Cinema and Torre – to seven pre-existing buildings, part of the former Sis distillery that dates back to the early 1900s.

Consequently, two dimensions coexist in this project: the conservation work and the creation of a new architectural project which, albeit distinct, confront each other in a process of on-going interaction.

An exhibition space given over to contemporary art exhibitions and architectural projects, cinema and philosophy (fashion shows are not contemplated), whose distinctive trait is that of providing different coexisting and interacting areas.

In this way, the variety of new spaces acts as a catalyst for an experimental programme in which different languages and disciplines coexist in an ever evolving intellectual process, while remaining quite independent.

As well as the temporary exhibitions occupying the various buildings, the complex also provides space for the Children’s Academy, an area that is open to a dialogue between adults and children and to various ludic, creative and learning experiences.

To top it all, the Luce Bar, situated in the first building you encounter on entering the new location, is designed by American film director Wes Anderson.  Here, the evocative atmosphere of a historical Milanese café has been recreated. So, the ceiling  and wall decorations reproduce the Galleria Vittorio Emanuele, the city’s iconic arcade, while the interior furnisnings in formica, the seating and marble chip flooring are reminiscent of bygone Milanese taverns and Italian films of the fifties and sixties.

Mallory Gabsi: from the eyes to the palate