110 pieces, to match the years of a brand that has managed to keep faith with a particular combination of design, knowledge of materials and workmanship, manufacturing quality and aesthetic research, with a constant focus on a sustainable world.
For this important anniversary Poltrona Frau unleashes a complete new and unexpected language to add artistic value to an already iconic creation: the Archibald chair first designed in 2009 by Jean-Marie Massaud.

The surface in Impact Less Pelle Frau®, a leather tanned with natural ingredients and without the use of chromium, takes on the optical flair of the Argentinian-Spanish artist Felipe Pantone, a connoisseur of color and its secrets, who based on the ColorSphere palette of Poltrona Frau and the world of the web and its evolutions has developed a hypnotic, hyper-digital motif.

A shaded grid of reds, oranges, yellows, whites and blues, resembling the temperature patterns of a heat map, conveying a vibrant overall vision of the aliasing effect of a low-res raster image.

To intensify the vibration of the surface, the base and the slim metal legs have been coated in Multicolor Natural Chrome, a finish with blue-violet iridescent shading that emits sparkling highlights when lit.

The wide range of colors in the Archibald Anniversary Limited Edition demonstrates the infinite possibilities of configuration offered by the brand. Moreover, the digital optical effect is printed directly on the leather with a technique usually applied to small luxury leather goods, displaying the great skill of the craftsmen of Poltrona Frau in the combination of hues and coverings. 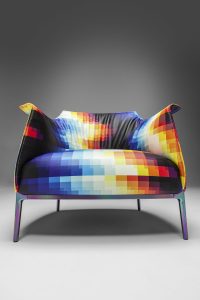 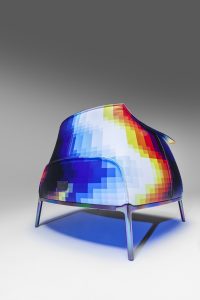 Nicola Coropulis, CEO of Poltrona Frau, adds: “This collaboration shifts the perspective of Poltrona Frau into the future, not just in terms of an initial interaction with an international artist, but also in relation to environmental protection. The new Frau Impact Less leather is the culmination of a pathway to sustainability, which has always been a key factor in the research and evolution of Pelle Frau.”

The Archibald Anniversary Limited Edition will be made in 110 exemplars, available for purchase on the e-commerce channels of Poltrona Frau and in selected stores around the world.

The project can be explored online starting in April and during the design week of the Salone del Mobile in Milan, from 7 to 12 June, at the flagship store of Poltrona Frau on Via Manzoni. Inside, visitors can see the entire Poltrona Frau True Evolution 2022 collection, and a digital installation made in collaboration with Felipe Pantone.