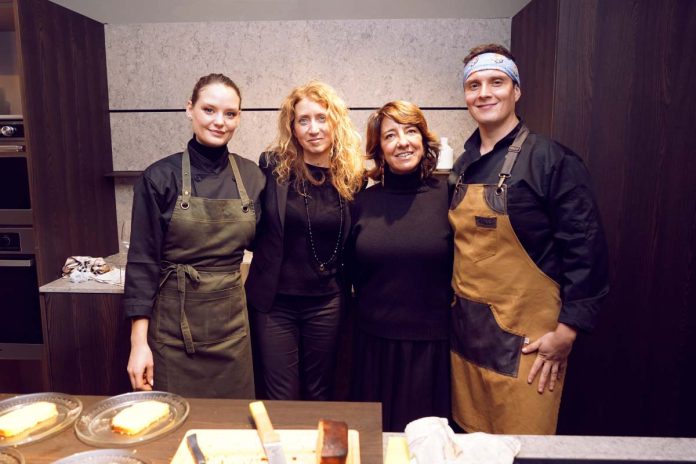 Offspring of the pandemic and now moving with ease into its second year, Casina Impertinente bursts onto the already crowded stage of design that tries to make its way into the world of food, and above all food that looks for a suitable setting, knocking on the door of design.
In this “little house” the Viva model by Maistri finds a perfect match.

A container created by the architect Monica Luraschi (founder and front woman of ēcasa), enlivened by two chefs who have run the Masterchef gauntlet unscathed (Alida Gotta won the silver medal in the 5th edition, while Maurizio Rosazza Prin came in second in 2012), Casina Impertinente is the place where the Viva kitchen by Maistri puts the message of a ‘universal kitchen’ into practice, deploying this major new offering of the company belonging to the Asso group.

When the media are the message – especially television and the web – the mixture of the skills of chefs and the “skillful way of welcoming their talents” becomes crucial for a smooth sequence of preparation and tasting, in a diverting, dynamic atmosphere.

The ample spaces that the Viva kitchen by Maistri makes available to the two chefs, or – in prospect – to lovers of gourmet cuisine, are enhanced by a variegated, intelligent storage system that is carefully concealed from view.

Being there without stealing the show is exactly the virtue that enables those who want to plunge into the art of cooking to find their own creative dimension. Once they have gotten their bearings in the Viva geography, they can operate with ease in a context where design fulfills its original purpose: that of simplifying gestures and while pleasing the gaze.

Casina Impertinente is an encounter of 4 very different realities, in terms of character, life choices and everyday practices, but this diversity is precisely what creates a sense of harmony, made of ideas and personalities.
A bit like the ambitious “universal kitchen” project of Maistri, where freedom of composition (and the possibilities are truly infinite) is put into the hands of the designer, who can rely on the technical experience of a company that has made personalization its true calling card.

Made and IBM for the digitalization of SMB