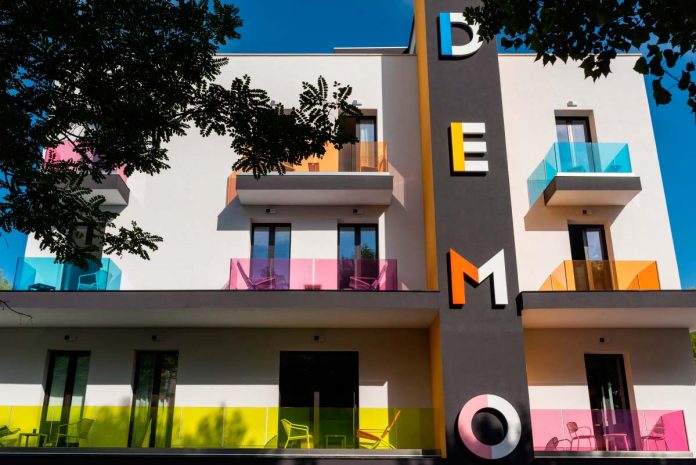 In July 2005 the world of hospitality, which until then had observed the new wave of signature interior design with a bit of reticence and suspicion, was surprisingly shaken by the opening in Madrid of Hotel Puerta America: 20 design stars (including Oscar Niemeyer) were summoned to envision the hotel, one floor each, as a new object in new colors. Color, in fact, represents the red thread that united these great minds: from Nouvel to Zaha Hadid, Arata Isozaki to Ron Arad, Chipperfield, Norman Foster and John Pawson, just to name a few.
The Puerta America is the watershed, the boundary between before and after, an after that still continues today, but not everywhere.

The Demo Hotel, a creation desired (and financed) by Mauro Santinato (founder and leader of Teamwork) and his partner (and colleague) Piero Marini, is comparable – in a proportional way – to the Puerta America, though it is not in Madrid, but in Rimini. Not the historic, Fellinian Rimini, but the part of the city where 70% of the buildings are hotels and rooming houses that have refrained from even thinking about changing the curtains for decades.

In the middle of this wasteland, amidst the dull gray of closed properties (for seasonal reasons, or definitively shuttered), flanked by constructions initiated and never finished, around a corner you suddenly see color, order, harmony.
After decades spent in the classroom to motivate and encourage hoteliers from all over Italy to invest in the present and the future, Mauro Santinato (probably) saw the chance to fulfill a dream, and took it: a dream he has always described to others, which has now become a tangible reality.

Having purchased the building, he called on 14 Italian architects, assigning them their own spaces to be designed. Then he invited 35 Italian furniture companies and 13 players in the world of technologies to become his partners in this adventure, along with the companies contacted by each individual architect to work on the specific projects: nobody refrained from taking part, and the positive energy grew.
The final outcome speaks for itself, and the photo gallery is quite complete.

Apart from the usual “like-don’t like” which is all too subjective, here what catches the imagination is the concept. In Rimini, since July, on Via Giovanni dalle Bande Nere, there is a Stargate, a magic circle you can pass through to find a new, different world, which can exist and will expand, like ripples on water, or at least that’s to be hoped. Other similar ventures will arrive, gravitating around the Demo, generating a small new world of hospitality in Rimini. And the emulation will spread.
The Stargate also offers the chance to go back, to resume the old routines of the old world. If that’s what you really want.

A new window for Living Divani at Linz