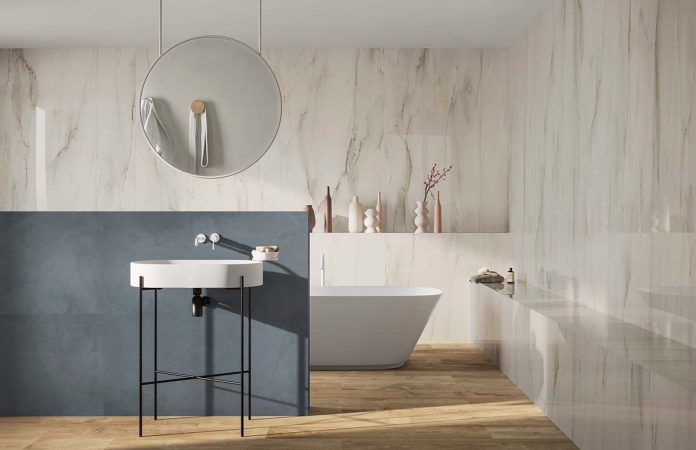 Fifteen pavilions at BolognaFiere completely filled. 600 exhibitors, including 41% from abroad, arriving from 26 nations. These are the numbers for the comeback of Cersaie from 27 September to 1 October, “the first true international fair with physical presence on ceramic tiles, bathroom furnishings, design and architecture,” as Giovanni Savorani, president of Confindustria Ceramica, writes in the editorial of the magazine CER il giornale della Ceramica.

There is plenty of enthusiasm regarding this event, now at its 38th iteration, as the most authoritative annual showcase for the world of ceramic tiles and bathroom furnishings. A meeting place for buyers, companies, architects and installers from all over the world. The fair guarantees total safety, requiring a Green Pass for all who enter, in close collaboration with the city of Bologna, as seen in the poster Bologna Together with Cersaie that puts all the initiatives under a single umbrella, recognizable for visitors.

Important appointments include the master class by the Japanese architect and Pritzker Prize winner Shigeru Ban, on Friday 1 October at 11.00, in the Palazzo dei Congressi of BolognaFiere, introduced by the architectural historian Francesco Dal Co; the exhibition on regeneration of peripheral zones by the work group G124 of Renzo Piano; the demonstrations of Città della posa; the Cafè della stampa (with the participation of IFDM); and the private consulting with the program “Cersaie designs your home.” Also worth seeing: the Contract Hall in pavilion 18 with Archincont(r)act, a new networking space between the world of production, that of design and clientele in the field of real estate and contract, with ten architecture firms narrating their projects around the world.

The hot topic of the Superbonus is discussed on Thursday 30 September at 16.30, in the Agorà dei Media, together with exponents of Confindustria Ceramica, Angaisa – Associazione nazionale dei distributori idrotermosanitari e ceramica – and the consulting firm PwC TLS.

Those who cannot make it to the fair can get connected with Cersaie Digital, the platform that from 20 September to 8 October provides information on the event and its protagonists, while offering a chance to schedule online encounters.

Cersaie shifts to 2021, but in the meantime…

Iosa Ghini in the center of Bologna