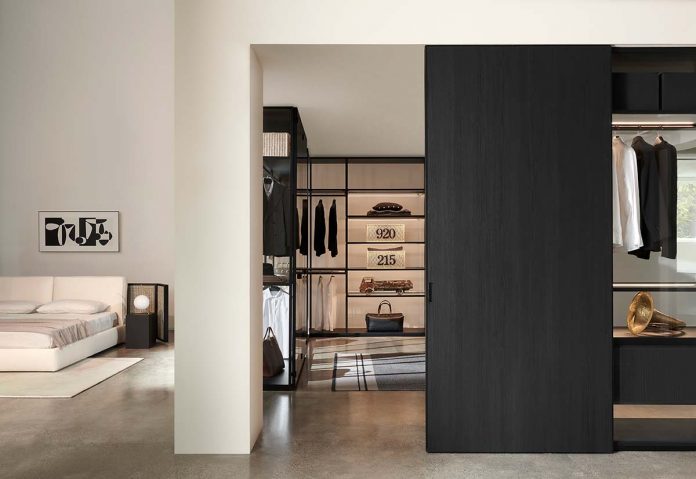 The famous aphorism of the Greek philosopher Heraclitus – panta rei – seems to describe the trends in the world of doors, partitions and bookcases. In constant flux and ongoing transformation, these systems for storing, dividing, personalizing, separating, concealing can be used to create wardrobes or to adapt to versatile residence that keep pace with the rapid changes in our ways of living and relating to others.

Boffi|DePadova presents Antibes System, made of components to create open-backed bookcases against the wall or at the center of the room. The system stands out for its great flexibility, thanks to the various heights of the fides and the multiple widths of the shelves and bases. The program by Piero Lissoni + CRS Boffi permits configuration of floor-to-ceiling shelving attached to the ceiling. In compositions over counters, it is ideal for use in the kitchen, as an accessorized storage wall.

Personalization is the key term for the Aria modular bookcase, which David Dolcini has designed for Porada. With support columns in ash wood, the composition can be enhanced by shelves, drawers and cabinets sustained by a matte black metal framework.

Playing with curved lines and functioning as a divider or a cabinet, Hide&Seek by Pietro Russo for Gallotti&Radice has surfaces and half-cylinders in wood, painted in the colors Rosso Persia or Grigio Londra. The half-cylinders, open on two sides, become completely closed compartments in the rotating version, offering spaces for the storage of objects.

Totem, designed by Roberto Gobbo for Euromobil, is a versatile new ceiling-mounted system that carries out several functions: from a showcase for books and knick-knacks, to a container of objects, a desktop, or a diaphragm between two spaces. With shelves, compartments and desktops that can be added as options, the system lends itself to various uses, in addition to its role as shelving. The structure with slender posts can be positioned at the center of the room or against a wall to ensure great compositional versatility.

Multifunctional approaches are also seen in the world of partitions, where the new Glide doors by Piero Lissoni + Iaco Design Studio for Porro range from the clarity of transparent glass, enclosed by a graphic border, to the warmth of wood, permitting the creation of large mono-material walls. They quickly shift from separation to an open view, with which it is possible to create wardrobe cabins in combination with the Boiserie Storage system, halfway between a walk-in closet and an open wardrobe.

Among the Lualdi projects used for partitions, Wall&Door is certain the easiest to shape. Developed as a vertical system for assembly of modular panels and doors, it can be used to rationalize, define and match surfaces in the same room. The doors can conceal or expose, marking divisions, and the wardrobes can be totally personalized: wood, lacquer, leather, fabric, metals and slats can be alternated at will to create completely customized spaces.

Doga, designed by Gianluca Santambrogio for Res, reinvents the concept of paneling. Not just claddings for a wall, but true stylistic features that bring character and personality to any space. The system of vertical slats is completed by hinged or sliding doors, hatches to enclose niches, and is ready for the insertion a television and shelving.

They can be used for wardrobes or for large spaces, to create a proper balance and to optimize the use of space: the Dooor folding doors have been designed to bring out the best in different types of rooms. The choice of bilateral, central or multiple opening systems responds to all types of needs, along with the range of finishes and facings, which can be different on the two sides: this means that one side can establish a dialogue with a certain context, while the other can have a completely different character.

The ‘fluid’ spaces of ADL