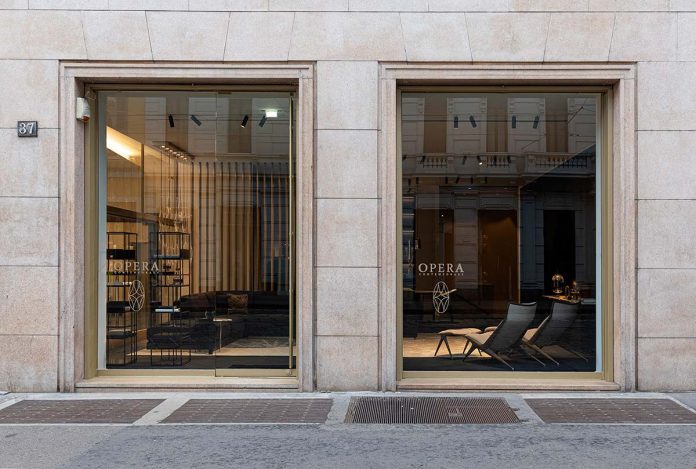 Lights, camera, action at Via Manzoni 37, in what was known as Milano da bere in the 1980s, near the Brera district and the fashion quad: a location of such visibility that mistakes are not allowed. Opera Contemporary is well aware of this, and hasn’t missed a trick. The project by Bestetti Associati for the brand’s showroom is a magic box in which the company’s long-term icons are combined in a natural way with the important new creations for 2021. The design respects the character of the spaces, with well distributed settings that make the facility seem much larger than the actual 200 square meters of its layout.
The finishes call for a special tracking shot: the juxtapositions of marble and wood, leather and fabrics, the stylistic impact of simple gilded pillars, like orderly cameos with an elegant mission.
Inside such a precious container, a product of value takes on even greater value.
Among the many new developments, we can mention Aurora by Draga & Aurel: an appealing lounge chair (though perhaps it could be called an “anywhere chair”), a case of love at first sight, with its disparate lines (a definition supplied by Aurel Basedow) and infinite curves.
A pair of Aurora models stands out in the window, tempting visitors to enter.

Daytime, nighttime, the bathroom zone: all settings that take their place in the world of luxury, but without arrogance or ostentation, conveying an impression of “beautiful, rich, but also down to earth,” a spontaneous and natural call to action for a demanding, refined clientele.

ICFF: the word to the Director

Maison&Objet changes direction and sets its sights beyond borders