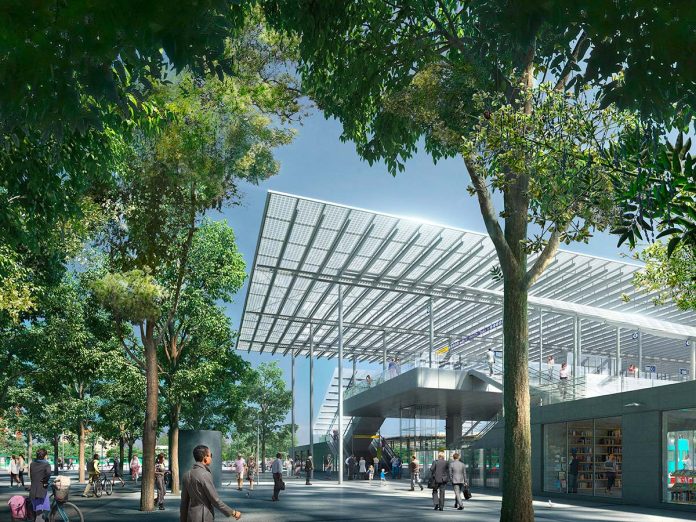 Envisioned as a footbridge connecting the two sides of the city separated by the railroad itself, this walkway in iron and glass is actually a true urban planning initiative that has the objective of mending a historic rift between the center of Sesto San Giovanni and the former Falck industrial areas (one of Italy’s oldest companies in the steel sector, founded in 1906 in Milan by Giorgio Enrico Falck).

The sources of inspiration for the design are undoubtedly historic railroad stations, from which it borrows the structures in metal and glass. The first feature to catch the eye is the overhanging glass roof that seems to soar over the pedestrian walkway. The roof, with a length of 110 meters and a width of 20, powers the entire station thanks to a solar energy system that produces 100 kilowatts.

The Sesto San Giovanni station designed by Renzo Piano Building Workshop with Ottavio Di Blasi & Partners represents an exchange point with the metropolitan rail lines below, the railroad and bus transport, and is composed of a pedestrian platform of 89 x 18 meters, where passers-by enjoy the view of the park below, and find services such as cafes and shops.

Construction begins in May 2021, and will proceed in such a way as not to interrupt rail service. It will be an important fulcrum for MilanoSesto, especially for the Città della Salute e della Ricerca which starting in 2024 will contain the new facilities of the Istituto Nazionale dei Tumori and Istituto Besta, as well as the Unione 0 lot, the first area of the MilanoSesto to be completed during the course of the next year. Besides the company Milanosesto S.p.A., owner of the areas, the players involved in the urban regeneration of the area are Hines, as strategic advisor and development manager, and Gruppo Prelios, handling the project management of the whole initiative.

The essence of local heritage