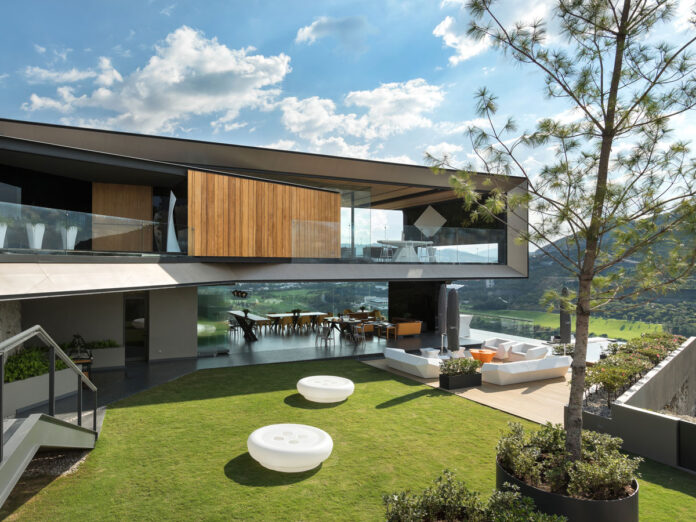 An architectural challenge and a wager of ecosustainability in a complex natural context that asserts itself, with its ‘a priori’ factors, as a vehicle and constraint in the composition.

Casa la Roca stands at the top of a rock formation in the Mexican city of Morelia, seemingly suspended, daring and light in weight. The project by Rrz Arquitectos overlooks the valley and the surrounding mountains without invading the landscape, which instead is incorporated, adding vibrancy to the idea of the facades – strategically oriented and mostly glazed – used to shape and permeate the relationship of indoor-outdoor mediation. To this end, Casa la Roca has been made on three levels, two of which rest on the rock while the third, with is overhang, is poised to find support on a wall-column clad in black glass, destined to vanish at nightfall.

The central core contains the communal areas and services: garage, kitchen, dining room, living area, terrace, pool, and a large garden. One wing hosts the bedrooms, one of which has a private terrace, while another wing is for the social areas, enjoying a 270° panorama.

The stylistic details rely on light, original volumes, architectural in certain cases, from the Vondom collections, used to furnish the various areas. The Voxel seating by Karim Rashid, angled and faceted, enhances the central dining room and the panoramic terrace. The fitness room and the 4 bedrooms are separated by a space furnished with a sofa, an armchair and a coffee table from the Stones collection designed by Giovannoni-Gargan; along the corridors, planters from the Bye Bye collection have been placed.
The versatility and dynamism of the brand’s most appealing forms are everywhere: from the childish look of the iconic Agatha collection, to the volumes conceived “to touch, to sit and to have fun” taken directly from the sketches of Karim Rashid.

Massimo Castagna: “Let me tell you about the evolution of Tonellidesign”

The Elective Affinities of Draga & Aurel

Hospitality with a story