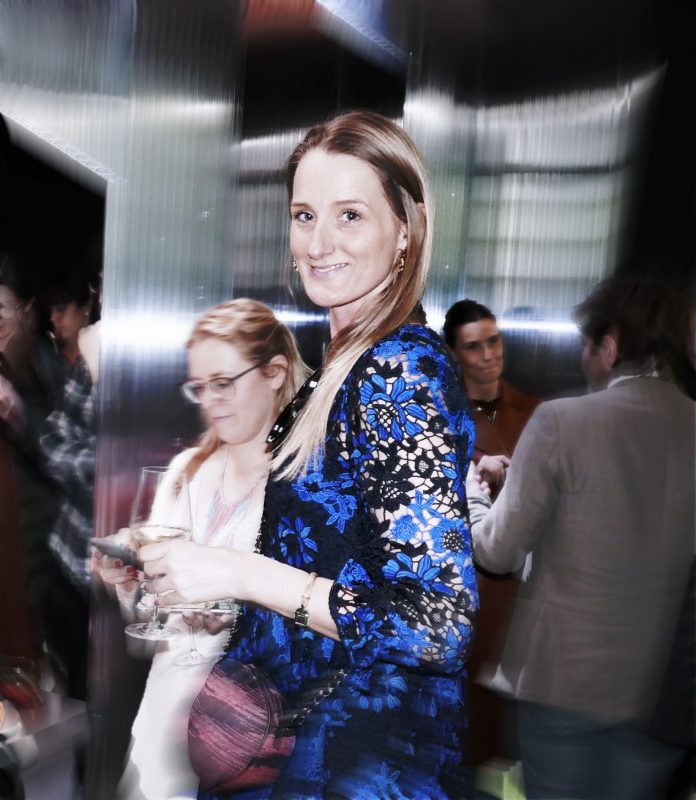 Four stories to narrate next year’s color trends. Two were previewed in the Spring-Summer edition of Contract&Hospitality Book, and two now conclude the telling, picking up the threads of an exclusive interview with an expert in this sector, Judith van Vliet, ColorWorks® Designer and leader of the ColorForward® team. She introduces us to the varied and multifaceted world of colors and chromatic trends, and everything related to this topic, including innovation in a wide range of sectors, changes and new orientations of the society, emerging movements on a global level. The point of contact between these two (apparently) distant conceptual spheres is precisely ColorWorks®, the design & technology center of the Masterbatches business unit of Clariant, which prepares an annual ‘color forecasting guide’ – ColorForward® – as the result of research conducted by the international experts of its four centers (São Paulo, Chicago, Merate and Singapore). Their job is to identify the new developments and changes emerging from the society and its dynamics, interpreting them in four macro-themes and translating them into a rainbow of hues – 20 in all, meaning 5 for each story.

Resuming our path along the palette of trends for 2020, we come across strong, lively, fresh tones, and the corresponding themes provide a glimpse of the conflicted condition and search for balance of the society. Cactus green, pale red, intense blue-green, bright yellow and ice blue go into the previously narrated story care-LESS; a story that reveals the phenomenon of ‘selective empathy’ with which society reacts to the enormous quantity of negative news. The colors of the futuristic, image-packed story Be Right There are equally intense and energetic: spotlights aimed at the major technological and scientific discoveries that will revolutionize (already starting next year) the conquest of space, with the support of big international tycoons. Vibrant orange, dark blue, anthracite gray, synthetic green, silvery lilac: these are the colors that shape the theme, and now give way to the final two stories of ColorForward® 2020, Genevolution and Eye am watched, balanced between biochemistry that influences genetic mutations and the digital dimension that shapes behavior rating.

“Where’s Wally?” has become a question that is easy to answer today. Thanks to widespread facial recognition and artificial intelligence systems, the protagonist of the popular series of children’s books hasn’t got a chance at remaining concealed. There are over 245 million active surveillance cameras in the world, while China is gearing up to reach a level of 626 million by the end of 2020, to implement the Social Credit System, a mechanism the Chinese government has been developing for some time to evaluate the ‘reputation’ of citizens, due to entering in full operation next year. The system is based on a ranking and feedback system (for those who have seen the British TV series Black Mirror, the dynamic resembles the “Nosedive” episode, the first of the third season): positive behavior leads to an increase of personal credit (leading to advantages in terms of travel, transportation discounts, access to major national services, etc.); otherwise, negative behavior leads to restrictions (winding up on the ‘blacklist’ can prevent access to private schools for your kids, block the possibility of travel abroad and slow down your web connection, for example). While the concept of privacy definitely loses ground, the values of transparency and security – in keeping with the objectives of the System – should receive a significant boost.

Without looking too far afield, a system of personal evaluation is already in place in western society as well: just consider the Uber app, through which you can submit ratings of both drivers and passengers; or Facebook, which since last year is applying a system of censorship regarding what are seen as ‘hateful user accounts.’ In Europe and America there are already many private credit rating agencies that screen clients through reliability parameters: in Germany, for example, Schufa Holding rates the credit of three quarters of German citizens and over 5 million companies: the Schufa Score, or rating for solvency, has an impact on applications for loans and credit lines, on the possibility of renting a home or signing a contract. The comparable company in the United States is FICO. 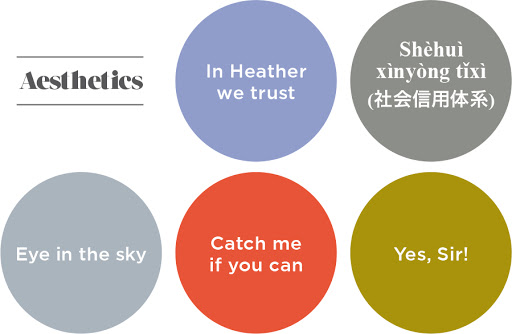 What are the colors that best reflect this trend? The palette as a whole is very well-balanced, and not very warm, augmenting transparency. It starts with the pale lilac known as In Heather we trust, taken from the ColorForward 2007 palette: a light, pale, harmonious hue. Shèhuì xìnyòng tǐxì(社会信用体系) – which means Social Credit System in Mandarin – is pure effect: a transparency that reveals the tones of the rainbow, to concretely suggest the pixels of video images, but also to conceptually refer to the many contrasting opinions on this topic. The LED lights of cameras are referenced by the high-impact fluo tone of Catch me if you can whose omnipresence is reflected, in a much more delicate way, by Eye in the sky, a sky blue with pearly inserts. Finally, the controversial overtones of this story are represented by the military green of Yes, Sir!, a rather dingy tone somewhere between ochre and olive green.

Pure avant-garde spirit permeates the fourth and final Story, completing the overview of color trends for 2020. While humankind has always studied, altered and replicated any material or chemical process on a basic level, now the same passion is applied to the study of living organisms. Biochemistry guides progress at a molecular and genetic level, to discover what defines the codes of life, i.e. DNA. The main innovation in this field is genetic editing, through the CRISPR/Cas9 system, based on the use of the Cas9 protein capable of cutting sequences of DNA, thus permitting modifications to the genome of a cell. This opens up new perspectives in the field of clinical experimentation (such as that of finding a cure for HIV or cancer, for example), also regarding alteration of genetic heredity to determine specific characteristics in descendants. This ability to manipulate evolution necessarily calls for responsibility and ethical considerations: up to what point can we exploit such technology? This question has led to the founding, on the part of a group of European scientists, of the Association of Responsible Research and Innovation in Gene Editing (ARRIGE), with the goal of providing global governance in this field, as well as guarantees to permit the development of these practices in an ethically responsible context. 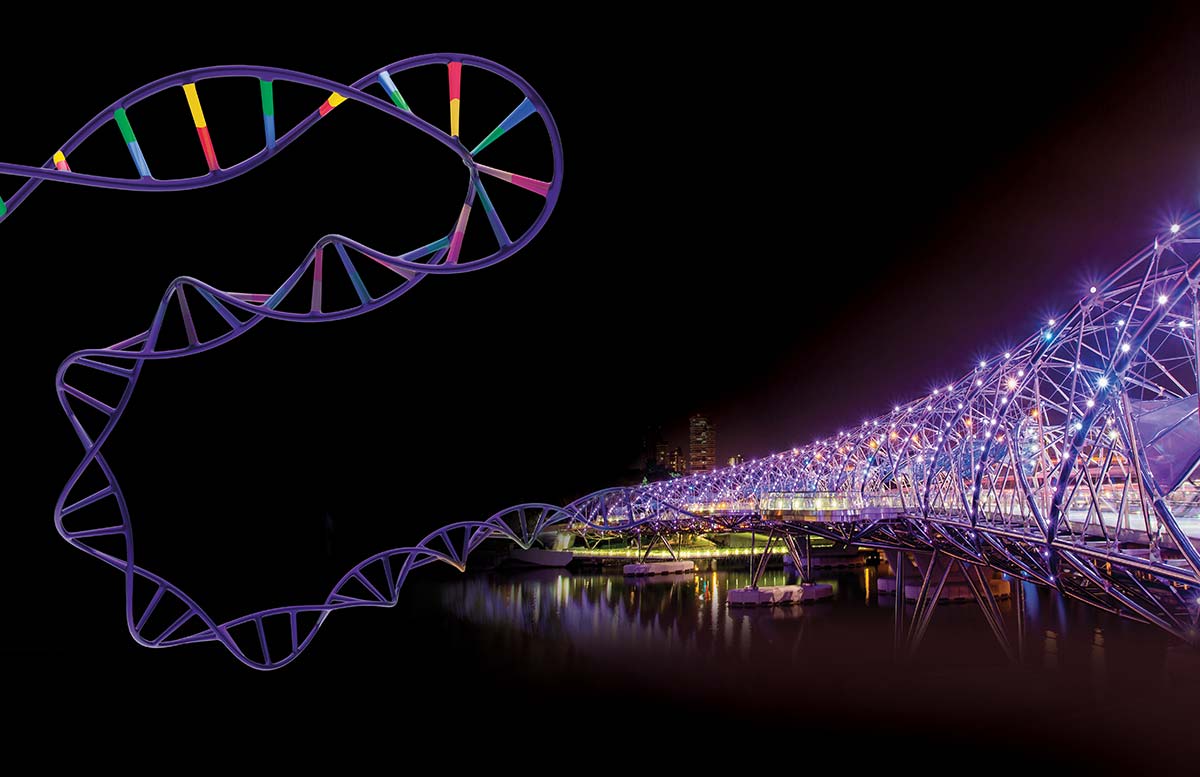 There are also benefits for sustainability, since the CRISPR/Cas9 system can produce genetically modified foods or animals. This year the first meat was grown in a laboratory starting with animal DNA: a solution that might be an answer to worldwide nutritional needs (just consider the fact that Americans alone consume over 26 billion pounds of beef per year). Furthermore, in the inorganic world CRISPR/Cas9 can intervene in processes of ultra-personalization: cements that use microbes to keep things whole or to repair breaks, coatings that use advanced polymers for self-repair.

All good causes, but the solutions might just alter the delicate balance of the earth’s ecosystem. The varied results of this trend are reflected in corresponding colors, each different from the next, combined to create an intense mixture. 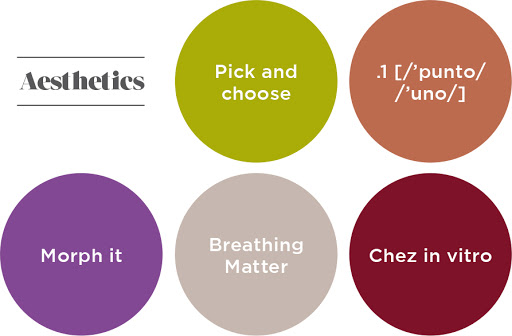 The emblem of the Story is Pick and Choose green, a rather unnatural “bug green” with a touch of pearl, to represent the idea of biohacking. At the opposite extreme, there is .1 [/’point/ /’one/], which with its pink tone containing a touch of black and very elegant pearl indicates the human side of this theme. The bright violet of Morph it chromatically embodies the transformation of materials and living beings (in the materic formulation of ColorWorks it also contains a pigment that intensifies the color in contact with light). The concept of ultra-personalization revealed by the theme is conveyed by Breathing Matter: a cement gray, more conceptual than natural; in the plastic version it is made with a black resin inside it to create marbled effects with green/red nuances, depending on the light. Finally, Chez in Vitro is a reference to food 2.0, to the synthetic meat that will be the food of the new millennium: hence the choice of a red with dark tones and a pearly effect. Reducing natural hues, the focus shifts to artificial colors to represent the technology and chemistry that will determine future evolution.