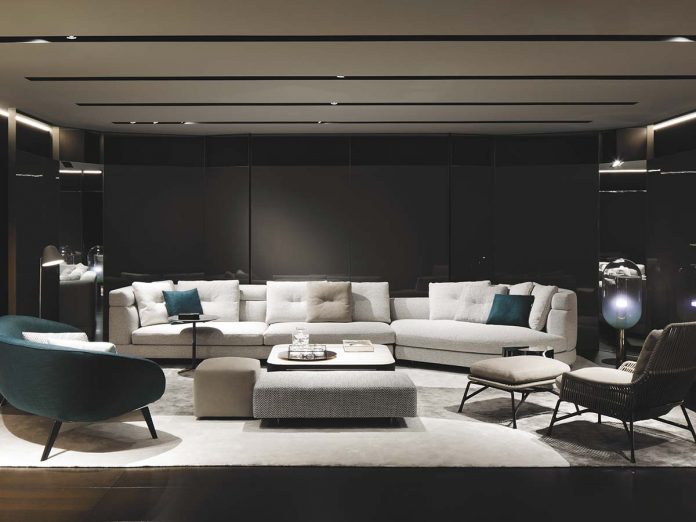 A new chapter in the close collaboration between Minotti and Sukeno. The exclusive partner in Japan of the company specialized in interior design has recently opened the first Minotti Boutique. The area of 70 m2 is located on the fifth floor of Isetan Shinjyuku, one of the most fashionable department stores in Tokyo.

The display space has been designed by Minotti Studio, the in-house creative division at Minotti HQ, and it sets out to respond to the needs of Japanese clients through a wide range of representative offerings. Glossy lacquer walls and bronze-finish details create a modern atmosphere in which to insert the latest collections.

Among the furnishings by Minotti, Alexander is a seating system by the firm’s art director Rodolfo Dordoni. The modules can be used to create L-shaped configurations or linear versions that can evolve into sinuous profiles thanks to the curved Alexander “Drop” elements.

The seats of the Tape Indoor Collection by the Japanese design studio Nendo reverse the traditional idea of support feet inside the volume of the seat, instead placing them on the outside of the structure.
Visitors can also admire the Prince Cord Indoor model, where the seat is stripped of the padding used on the first version back in 2012. The skeleton features a weave of tubular cords covered in leather. This too is a project by Rodolfo Dordoni.

The collaboration between the Minotti and Sukeno families has led to the opening of other stores, including Minotti Aoyama in 2017, after Minotti Court in 2005, which was followed by Minotti Triangle in 2012.
The new opening joins a list that began a few weeks ago in France, at Marseille, and in China, at Shenzhen, thanks to partnership with the dealer Domus Tiandi, and in Xiamen, with the participation of Casa Bella (in the run-up to the opening in Xi’an slated for the fall).

NuBel. The pleasure of taking a break

Caffè Stern in Paris. A 3 stars experience between taste and...