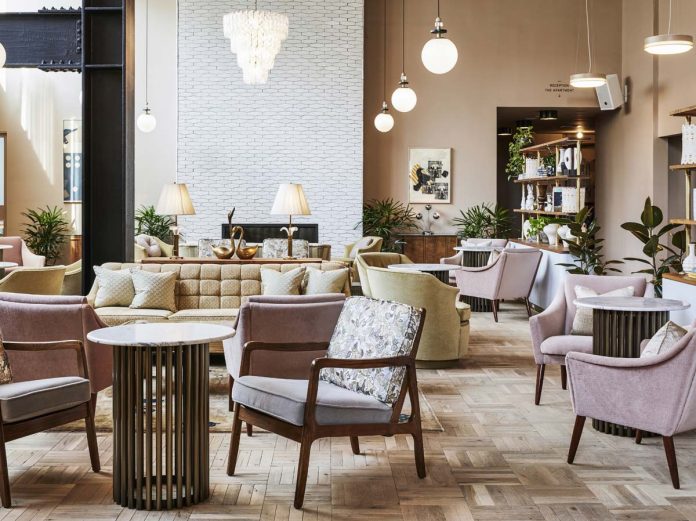 Industrial archaeology meets contemporaneity through a restyling signed by Perkins Eastman and interior design conceived by Ennismore Design Studio. The Hoxton Williamsburg is born, a melting pot of cultures among companies, designers, artists and artisans … made in Brooklyn.

A skilful renovation of the Perkins Eastman studio has incorporated the historic brick structure of the former Rosenwach water tanks factory into the new building, transforming it into a New York dwelling dedicated to hospitality. Inaugurated in one of the most creative areas of Brooklyn, overlooking the enchanting panoramas of Manhattan, the 175 rooms with interiors designed by Ennismore Design Studio are revealed in two different types – Cosy and Roomy.

The interior is characterised by a delicate style, among brass details, rough concrete ceilings, mohair headboards in the green nuances of sage, port and marina, custom-made, exclusive fabrics by the Brooklyn-based designers Dusen Dusen.
And it is the attention to local artistic expressions to translate the vision of the various The Hoxton hotels – from the first opened in London in the Shoreditch area to the subsequent openings of Holborn, Amsterdam, Paris – inspired by the originality of the streets and neighbourhoods, melting pot of cultures and meeting place for guests and local creatives.

“Hox Friends” was therefore born as an initiative to bring the social fabric of an area of ​​the city inside the Williamsburg hotel spaces: 175 people among entrepreneurs, artists, artisans, influencers were recruited to select and curate of the rich library of each room and share their ten favourite books.

And it is in collaboration with the exclusive Soho House that Ennismore Design Studio has also shaped the refinement of the interior in the restaurants managed with Brightside hospitality by Jud Mongell of Five Leaves and Zeb Stewart of Cafe Colette, Union Pool and Hotel Delmano: from the cocktail bar Backyard at Klein’s characterised by an elegant outdoor kitchen by the Italian company Molteni, to Summerly, inaugurated in the summit of the rooftop.

The Lexicon of Cartier

The five elements of Borzalino

Devon&Devon celebrates with Aurora and Morris

The “new classics” of Roche Bobois and Lacroix