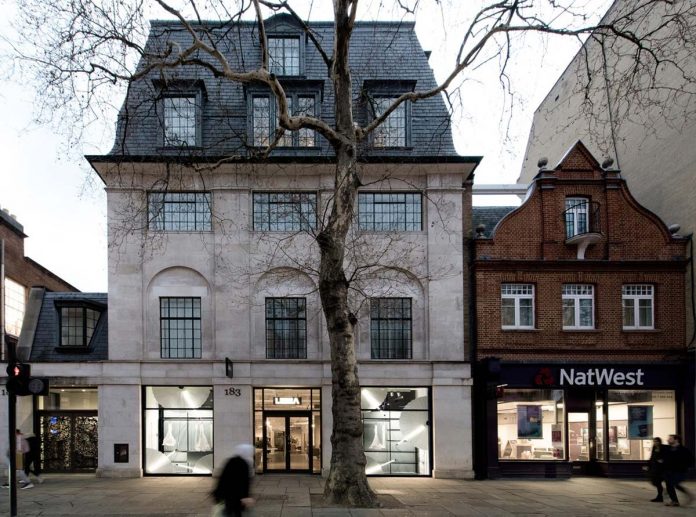 Delicate, sophisticated, minimalist: this is Plis électriques, the visual conceived by Chiara Andreatti for the windows of Lema in the heart of Chelsea, at 183 King’s Road. The young and talented designer, who created two products for Lema last year and will be at Salone 2019 with the Taiki sofa, dreamed up an evocative installation, with over-sized pleated paper fans that are lightweight and sculptural at the same time.

Transparencies, plays of light, and now-you-see-it-now-you-don’t effects capture the eye of even the most distracted passer-by. Mobile séparés that act as theatrical wings to the true protagonist: the custom designed Hangar walk-in closet by Piero Lissoni, on display in its version with bronze struts and shelves painted in the fresh and springy colour of thyme green. Plis électriques is the first of a series of visuals that will enhance Lema’s shop windows over the course of the year, bringing to life original creative stories through collaboration with various designers, each one different in terms of attitude and style.

Chiara Andreatti, with her soft yet mature feminine touch, confirms her position as one of the most promising and interesting figures in the landscape of international design. Born in Asolo, near Venice, in 1981, she moved to Milan to study first at the European Institute of Design and then to attend a master’s program at Domus Academy.

She has worked in numerous design studios, like those of Raffaella Mangiarotti and Renato Montagner, as well as the Lissoni Associati studio, where she collaborated for over ten years. She designs for companies like Glas Italia, Lema, Potocco, Gebrüder Thonet Vienna, Non Sans Raison, Starbucks, CC-tapis, PaolaC., Mingardo, and Atipico.

Giopagani at Harrods with his designer interior