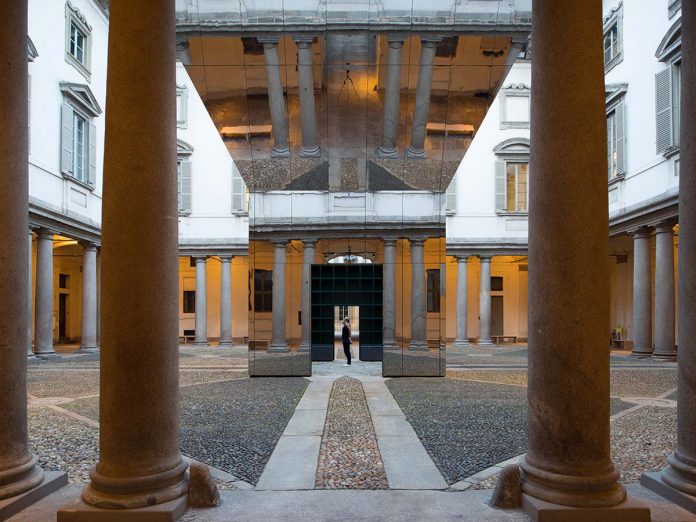 For a week the world of design will shine its spotlights on Milan. 5Vie will be one of the most interesting and attractive districts of Milano Design Week, and Palazzo Litta (Corso Magenta 24) is one of the exposition’s must-see locations.

This historic building will house the exhibit curated by MoscaPartners, entitled The Litta Variations / Opus 5. The initiative features twenty-two exhibitors, with over sixty-five designers from the international design landscape, representing a total of eleven countries from around the world which will animate the Palazzo.

Visitors will be immersed in the installations starting immediately with the Cortile d’Onore, where a leading role will be played by Echo, a mysterious object created by Chilean studio Pezo von Ellrichshausen which inspires a sensitive connection between the building’s interior and the exterior setting.
The object is a conical structure with an entirely mirrored surface that externally reflects the Baroque colonnade, showing those who enter a portion of the sky. Echo was conceived as a permanent work, intended to endure over time.

The tour continues in the Teatro Litta, where Pro Helvetia, the Swiss cultural foundation, presents a selection of eleven young students. Brazilian brand Sollos will be in Palazzo Litta, in the foyer, for the second time with Good News from Brasil, while Ecole Camondo with Teatro del girono, 6 giorni, 6 temi [Theatre of the day, 6 days, 6 themes] will transform the Copper Room into an active set between courtyard and garden.

Among the various installations hosted within Palazzo Litta, Walk out the dooor by the Calvi Brambilla studio for Dooor, and Artmining Milano 2019, a project aimed at promoting Korean artists internationally, stand out. The latter project features 26 artists who will be displaying contemporary works of art, artisan crafts, and design from Korea in a single context.

Many high-end Italian furniture companies will be taking part in the event, like Flos which was entrusted with the lighting of the external spaces and of the Echo installation, and B&B Italia which is providing a series of twenty-two PAB benches in light brushed oak, while the stone seating has been designed by Salvatori.

Henge, the world via London

Germany in decline, Ambiente is growing

Times Square on a human scale