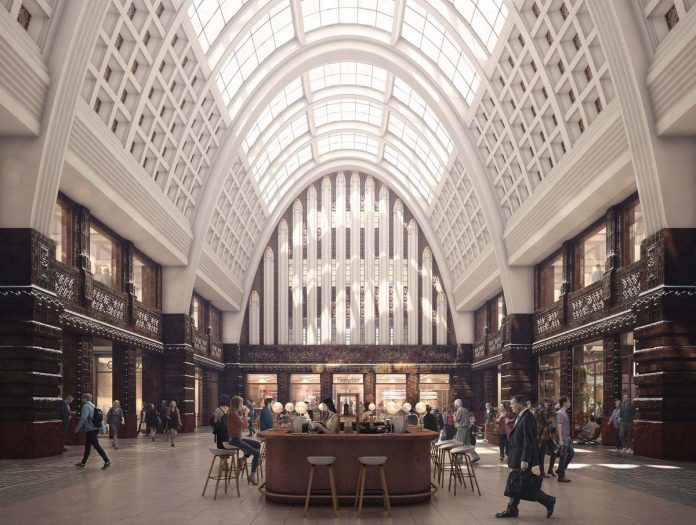 Since 1916 the headquarters of the Post Office in the centre of Rotterdam, the building known as Postkantoor, has been witnessing, unperturbed, the radical transformation of the city, from the terrible tabula rasa inflicted on 14 May 1940 with the Rotterdam Blitz to the great deal of bold and innovative contemporary architecture realised in the most recent decades.

Almost a century later, even for this architectural icon of the city’s past – located halfway between the Centraal Station and the Markthal of the MVRDV and very close to the new city hall, the Timmerhuis, completed by OMA in 2015 – the moment has come for transformation, thanks to a complex project of ‘adaptive reuse’ commissioned by the owner Omnam and by the Municipality of Rotterdam to the ODA studio of New York.

The new intervention is part of the area of Colsingel Development, masterplan of urban renovation elaborated by West 8, and it is aimed at the creation of a ‘civic hub’ that, in the respect of the historical heritage can instil new ‘urban energy’ with a mixture of functions, public, retail, residential and hospitality space, and a dual collective and private spirit that is able to reconcile internal and external, conservation and innovation. The original, magnificent Great Hall on the street level, with ceilings that reach 22.5 metres in height, will be faithfully restored to become the principle public nucleus of the project, a grandiose pedestrian gallery with commercial, cultural and entertainment spaces that are accessible from every side of the perimeter, creating a physical and conceptual connection with the brand new adjacent tower.

As Eran Chen, Executive Director of ODA explains, “The POST tower is a reinterpretation of both urban living and the Post Office’s architectural assets, extending the elegance of the main hall through to the tower. This modern addition to the Ensemble Buildings in the Coolsingel district is based on an extremely rigorous investigation combined with the expertise gained over two years working with city partners.”

The new 150 metre high skyscraper integrates with the existing one, twinning it: the base, in fact transforms into a second grandiose gallery with vaulted covering and a columned façade, on which rise the 43 floors dedicated to the new urban residences of various types. The cladding in stone, the columns and the varieties of openings celebrate the elegance of the historical building, at the same time introducing something new to the ‘glazed’ skyline of the city.

Sojourn in the moonlight

Design is a flavor