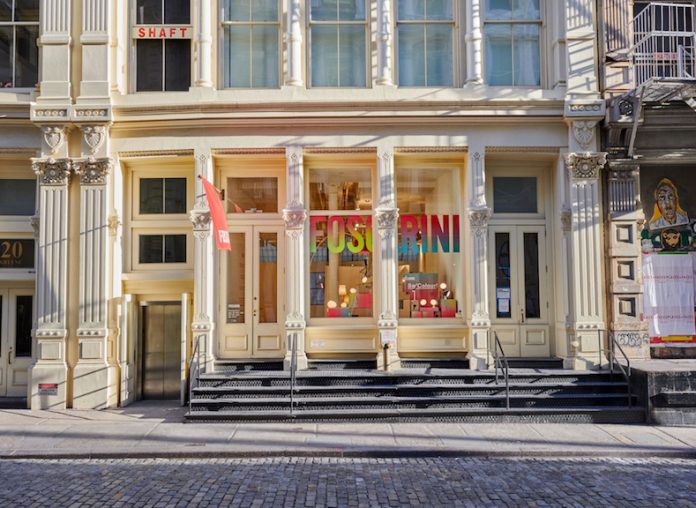 The Spazio Foscarini of Manhattan has been transformed into a “chromatic theatre” to welcome the Be/Colour! collection in the presence of President Carlo Urbinati and the architect Ferruccio Laviani. A capsule that reimagines five icons of the made in Italy brand, in an unexpected dialogue between form and colour

“We sought to push ourselves beyond the “All Over” of the single colouring and, wherever possible, we have created chromatic combinations, trying to give each single lamp even more of the unexpected”, says Ferruccio Laviani

The colour narrates the form, revealing a different perception of the object between combinations and contrasts, of what is full and empty. The volumes take on new life and the finishes become an integral part of the structure. It is the alchemy narrated by Be/Colour!, collection designed by Ferruccio Laviani for Foscarini, a company with which the architect began a close cooperation in 1991 with Orbital, lamp-sculpture that explores the dialogue between morphology and colour scheme.

Presented by Carlo Urbinati and Laviani himself who reimagined Foscarini’s New York space in Soho, the capsule interprets five iconic lamps – Twiggy, Magneto, Binic, Bahia, Gregg – immersing them in daring combinations that are new and exciting. “Emotion and perception become a whole” explains Ferruccio Laviani. “Colour and its values – ranging from the physiological to the biological, from the cultural to the symbolic – are expressed in the designs through a material and a colour that transform an idea into something solid, tangible…  Just like the way we perceive domestic environments differently when the walls are repainted, so too we feel a sort of amazement at seeing an object – whose colours we took for granted – in an unusual shade or finish that makes it look new and unexpected.”

Not mere decoration “Our lamps – says Carlo Urbinati, President of the brand – are design objects with a strong personality that during the day, when they are turned off, surprise us for their ability to dress a space and at night, when they light up, they seduce us with the emotion of their light.” Designed by Marc Sadler, Twiggy in the redesign by Laviani, takes on a completely new character between saturated and brilliant colours: the curve of the stem emerges as a gesture, the base reveals a different weight, the diffusor creates a dialogue with what sustains it.

Magneto by Giulio Iacchetti in its essentiality expressed by a white diffuser supported by a magnet on a black stem, or vice versa, in Be/Colour! it more forcefully narrates its technicality in the combinations that define its gestures, while the asymmetrical geometries of Bahia by Lucidi e Pevere are accentuated by combinations that enhance their theatrical potential and the play of reflections. Imagined by Ludovica + Roberto Palomba, Gregg has an organic style  that evokes a stone that has been polished by water and changes its appearance according to the observation point. A form derived from nature that, in the bicolour version, reveals itself in an unexpected design reversal, better understood in the relationship between the parts with glossy gold and graphite finishes. They give the base a new distinctive accent.

Finally, the sublime colour combinations of Binic by Ionna Vautrin express the creative quintessence of the capsule: the play with the palette from white to petroleum, from green to amaranth, from grey to orange, giving new reading to the volumes and highlighting the components. In an unexpected and surprising formal dynamism.