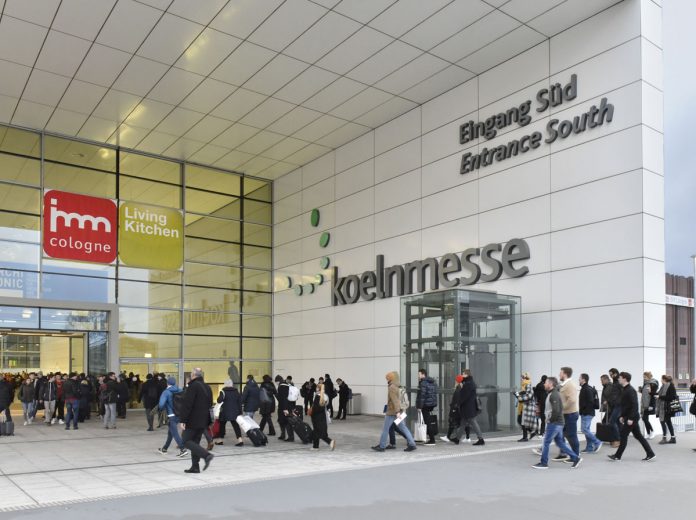 Imm cologne/LivingKitchen drew to a close on Sunday (20 January 2019) with excellent results. A total of 150,000 visitors – including estimates for the final day of the events – made their way to Cologne to be inspired by the interior design worlds and kitchen showcases on display. With 52 per cent of trade visitors coming from abroad, the co-located events achieved an even greater global reach than ever before.

Overall, more than one in two trade visitors travelled from abroad to attend the events. The visitors came from 145 countries. Growth in overseas trade visitors was especially strong. But the trade fair duo also attracted greater numbers of visitors from other European nations. “These results underscore once again that Cologne is the place to be for the global world of interior design.
The past seven days have shown clearly that it is here in Cologne that the industry sets the direction for the coming year,” said Gerald Böse, President and Chief Executive Officer of Koelnmesse. Echoing his comments, Jan Kurth, Chief Executive of the Verband der Deutschen Möbelindustrie (Association of the German Furniture Industry, VDM), said, “After a challenging 2018, this edition of imm cologne was an outstanding event and a successful trade fair that we as the industry are very pleased with.”
Speaking on behalf of specialist retailers, Thomas Grothkopp, Managing Director of the Handelsverband Wohnen und Büro (German Retail Association for Home and Office Furniture, HWB), said: “imm cologne and LivingKitchen were once again a hotspot for inspiration and business contacts for specialist retailers. They created an appetite for interior design and made for a dynamic start to 2019.”

The events achieved significant rises in trade visitor numbers from China (up 23 per cent), North America (up 15 per cent) and South America, where an increase of 29 per cent was recorded. Within Europe, considerably more industry professionals from Greece (up 31 per cent), Ireland (up 30 per cent) and Portugal (up 31 per cent) travelled to imm cologne and LivingKitchen.
The numbers attending from Spain also rose slightly by 4 per cent. The organisers are especially pleased with the 13 per cent increase in visitors from Eastern Europe. Even though traditionally the numbers of trade visitors from the major European export markets have already been very high, this year’s edition of the trade fair duo achieved small increases in the audiences from individual countries. Visitor numbers from Belgium rose by 5 per cent, while visitors from the Netherlands increased by 3 per cent and visitors from France by 2 per cent.

LivingKitchen also proved that it can deliver on all fronts, despite challenging conditions. For seven days, 271 exhibitors from 28 countries showcased the industry’s and the event’s innovative drive, high design standards and quality.
And with the proportion of visitors from abroad at 53 per cent, the event once more proved to be very international. Innovative presentations by manufacturers, world premieres of new kitchen furniture, electrical appliances, accessories and the inspiring programme of events – the outstanding mix of everything connected to kitchens and cooking ensured steady levels of visitors on all days of the fair as well as satisfied exhibitors.

The strong growth of Marmomacc