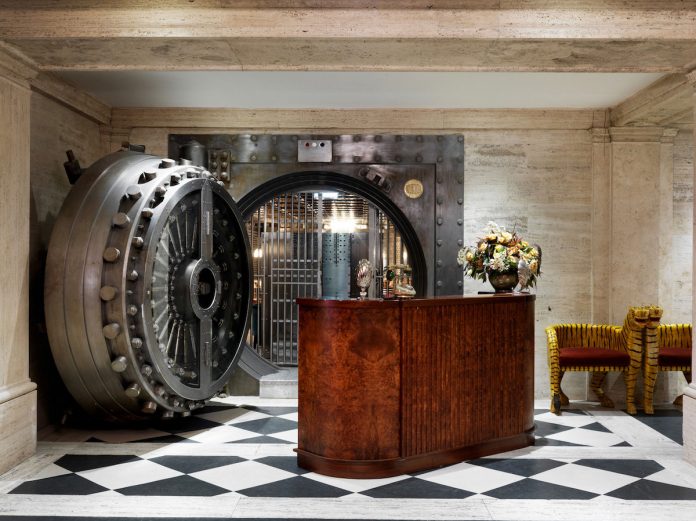 Until yesterday London’s Bank area, occupied almost exclusively by those who work in the finance market, would completely empty out at the end of the work day, leaving not a soul to be seen except for at the occasional pub. A reversal of this trend is now taking hold, with the area’s nightlife catching on and also attracting the elite in their free time.

The Ned opened recently, a lavish project by the English Soho House & Co together with the American Group  Sydel, which embraces various categories of hospitality in the name of that which the Anglo-Saxons call “leisure and pleasure”. A hotel with 250 rooms, 10 restaurants, a private members-only club, a spa, a gym, and a rooftop bar with a pool that looks out across the skyline and the dome of St. Paul’s Cathedral.

All within a beautiful building: the former headquarters of Midland Bank, designed by Sir Edwin ‘Ned’ Lutyens in 1924 and empty for the past eight years.
A renovation project that preserved, and never offended, the historical legacy of the building, even when confronted with an urban touch. One could almost compare the care taken in the preservation of the existing elements to an act of devotion: the 92 columns clad in African jade, the tapestries, the monograms that punctuate the ceiling with the initials MB in curved wood (also designed by Lutyens), and the caveau in the basement – the bowels of the building and the location of  Ned’s Club – dominated by the 20-ton metal door to the vault, next to the 3800 safety deposit boxes which are still lined up against the walls.

“We worked on nothing else for four years,” says Adam Greco, from the Soho House & Co design team, “completely immersing ourselves in the history of the area and the building in order to transform it into something new. Ours was a drive to balance colours, textures, and patterns.”

Details are sacred. “With the majestic suspension lamps in the main lobby, we wanted to pay homage to the location, reproducing the style of the era. And to contrast the hardness of the columns, we created soft and curvy chairs and sofas, almost shell-like, pleating the upholstery of the back and revisiting the capitonnè technique.

It’s Art Deco meets Gothic.” The rooms, all in the style of the 1920s and 30s, have strong romantic undertones, with bed frames that vary from room to room: wrought iron paired with floral upholstery and wallpaper in one, a headboard and footboard in curved wood in another, and a canopy bed with fabric panels in yet another. Among the whimsical details of The Ned are approximately one hundred pillows, all different, for ‘utterly delightful well-being’.

The building as living organism

The space within a seed

Four stars without any clouds