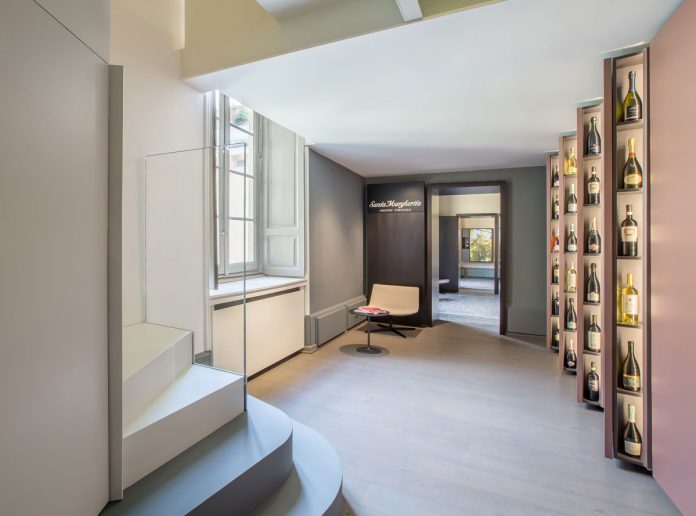 The new Milanese headquarters of the Santa Margherita group – one of the largest Italian wine producers in terms of turnover – are striking in their simple elegance and in the aesthetic purity that solemnly maintains the historic features of the building through a modern reinterpretation of the interior spaces.
The original decorative details were enhanced, including the wooden coffered ceilings and the painted ceilings with relative frescoed friezes, and the significant height of the spaces was amplified using design techniques that created new views and new alignments.

The rooms open wide into other rooms, and a double contrast – also in terms of colour – is articulated in the space in a delicate sequence which makes use of transparencies and vertical connections. Such is the case for the special stairway created by Fontanot, in collaboration with the Westway Architects studio: an ultramodern invention that leads to a glass mezzanine from where it possible to see the entrance to the offices.

The special feature of this square staircase is its sheet metal tread and the raised footplate made from the same material used on the first two stairs, picking up the colour of the wood boiserie on the perimeter walls.
The white stairs, in chromatic continuity with the wall to which they are partially connected, bordered by the transparent parapet that is flush with the wall, spiral around a fulcrum, culminating in the “ex novo” constructed mezzanine, which once again pairs the transparency of the glass with the functionality of the wood beneath the closets.

News and must-sees at the London Design Fair

The versatility of Novacolor finishes

A meeting of excellence