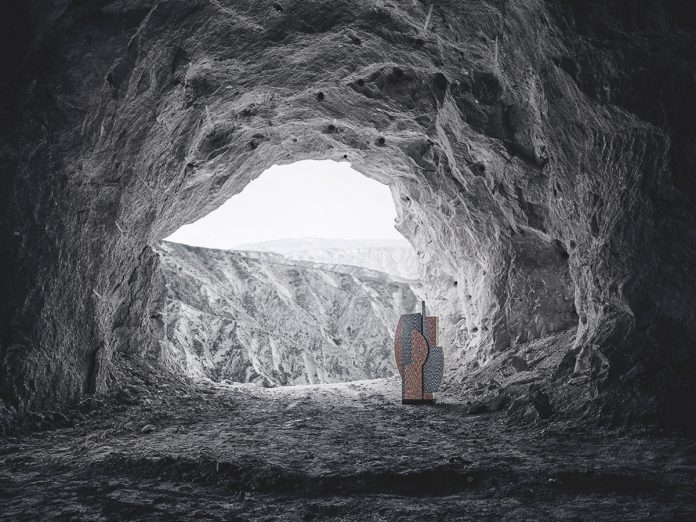 Light and the absence of light are the fields of exploration that have brought the professional lives of Alessandro Mendini and Vittorio Alpi together once more, thanks to the revival of the wood surface created in 1991 by Alpi for Atelier Mendini. This time the pattern created back then is available in two versions: Pointillisme COL and Pointillisme B/N (by Atelier Mendini with Alex Mocika), and explores a line of thought which led to the creation of three exclusive pieces of furniture.

Three volumes, designed specifically by Mendini for Alpi, whose shapes and décor represent the primordial origins, will be visible until 20 December in the company’s Milanese showroom on Via Solferino as part of the ‘Tre Primitivi’ exhibit.
It all began with the ruminations of Vittorio Alpi, who loves to walk through the countryside by moonlight, far from the lights of the town, and admire the contours of the landscape in the absence of light.

An exploration of ideas that exploded alongside his admiration for the story from Italo Calvino’s Cosmicomic entitled Without Colours – the story of the ‘coloured’ Qfwfq, in love with Ayl who, however, lives in a grey world – and that prompted him to contact his old friend, Mendini, so that they could once again explore his personal, evanescent, and immaterial vision, inspired by the pointillist paintings of Signac and Seurat.

The result was two decorative elements, one solar and one lunar: two worlds, as inseparable as they are incompatible with one another, yet integral to our existence. The polychrome dots and dusty appearance, reproduced in ALPI wood thanks to the company’s sartorial tradition, are fully expressed on Mendini’s three decorative pieces, which take their names directly from the world of Calvini: Qfwfq and Ayl. In between is Luna & Sole, the piece that represents the contrast and the dramatic scission between the two energies being emitted.

Putting the product in the centre