Over two decades operating in the country, a recent joint venture with Kuka that significantly expanded the retail network and plenty of artistic and design promotion activities targeted at Chinese creatives. The bond between Natuzzi Italia and China looks set to flourish thanks to the sky-high potential of the market – and the bright prospects of a company with a strong focus on innovation. We discussed all this and more Pasquale Junior Natuzzi, the second generation of the Natuzzi family and the new face of the company. Defining himself as a “contemporary native”, Pasquale Junior is a millennial and a citizen of the world, but – just like the company he represents – has never lost sight of his origins.

Natuzzi has a long-standing relationship with China. What position do you currently occupy on the market?
China is a strategic market for Natuzzi and one we’ve always believed in. We’ve spent over 20 years investing in the core assets of our business: production, marketing and distribution. Right now we’re one of the very few Italian furniture brands to have high popularity among the so-called Chinese upper class, according to a recent study by Nomisma called “Perception and positioning of Made in Italy in China”.

The joint venture with Kuka has enabled you to expand in China in a big way. What are your objectives for the future?
Natuzzi already has over 150 stores in China, 37 of which opened over the course of 2017. By combining the Natuzzi brand positioning with Kuka’s deep understanding of the Chinese market, we’ve been able to create a joint force ready to tap into the huge growth potential that China’s luxury furniture market has. The venture will enable us to make the most of a huge pool of users and accelerate the retail development of Natuzzi Italia and Natuzzi Editions in areas in China in which the brand isn’t yet present, as well as online. The expansion of our distribution network will also increase brand awareness for Natuzzi in an enormous market, while the expected growth will obviously also have positive repercussions on production in Italy and distribution via our Natuzzi Italia stores.

How aligned is the Chinese public with the “Harmony Maker” concept that inspires the brand?
Harmony is the “religion” that guides all Natuzzi creations, from products to stores. We are a lifestyle brand that wants to convey a concept built around interiors that are comfortable, functional, innovative and harmonious. These values are perfectly in sync with those of Chinese consumers and industry professionals. As a result of the Natuzzi Design Award, which was launched last year and has seen designers and architects from all over China offer their interpretation of the “Harmony Maker” concept, a whole range of fascinating projects have been started. It’s a really clear example of the way design in China is evolving and shows that Natuzzi Italia “Harmony Maker” concept is being taken to heart.

Are you going to be unveiling any additional projects at the upcoming Salone del Mobile.Milano Shanghai?
We’re working on a new concept called “Open Art in Harmony”. It’s linked to the world of art, which is very different in China to what we’re used to in Europe. Natuzzi’s bond with the art world goes back a long way and now – after working on a host of projects around the world – we’re bringing that to China for the first time.
Launched in Shanghai back in May, the project will go to the next level during Salone del Mobile.Milano Shanghai, when we’re going to be unveiling a new creation by the artist Xu Zhen, who’ll be producing a site-specific installation at the Kerry Center Mall using products from the Natuzzi Italia collection. We’re also organising an afterparty where we’ll give a platform to young, emerging artists, who will customise our Re-vive – one of our most iconic pieces – with specially developed patterns.

You teamed up with LG Electronics to launch the Smart Living concept. Does that represent the future of how we live?
Over the past six years I’ve spent working in the sector, I came to realise that there was a huge opportunity there for us to create a new market segment in which the Internet of Things could be combined with a Smart Furniture collection. I contacted LG because they’re the best in the world when it comes to artificial intelligence and smart devices. I visited the LG Science Park in Seoul and saw how they’re making more and more progress in terms of creating a smart home that does everything for us – from preparing food to doing the cleaning. Faced with this new future, we set about devising a revolutionary living concept, starting with the sofa – the centre of domestic life. We wanted the sofa to be able to interact with other living room devices and will be rolling the concept out to other rooms, including the bedroom and lounge. 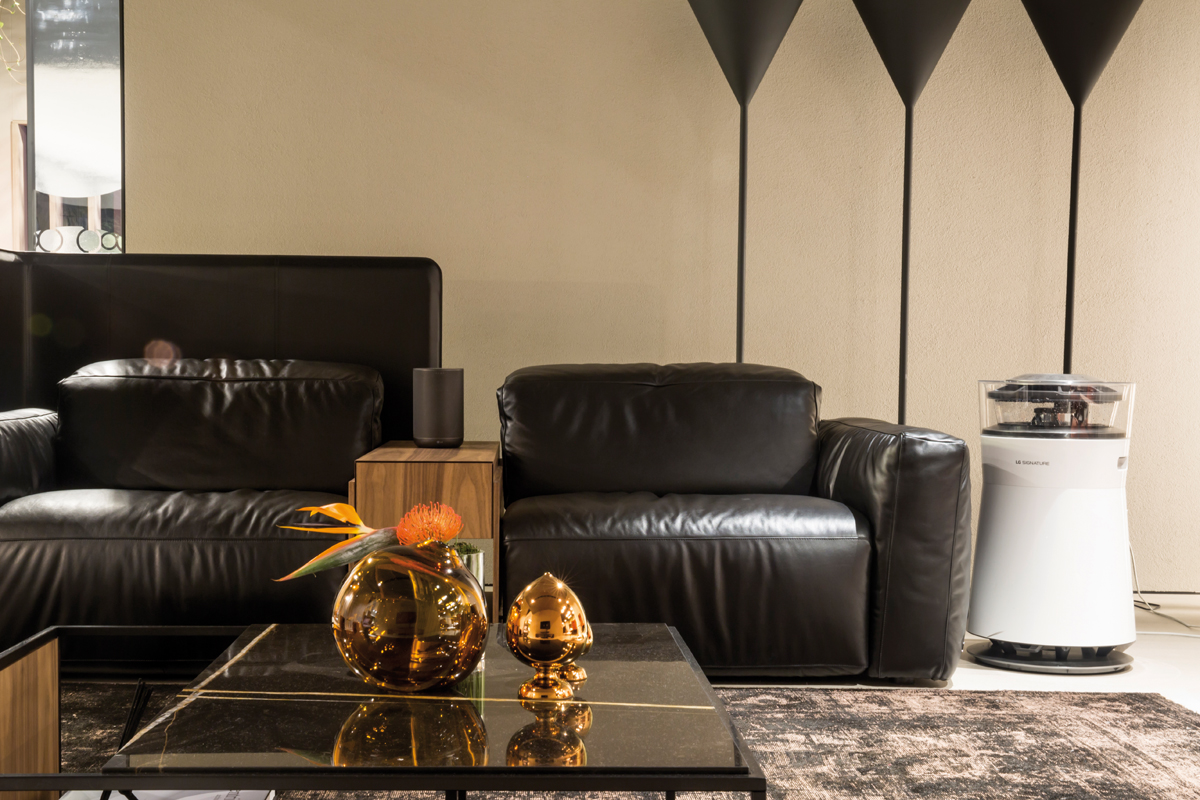 Your arrival at the company has been followed by a noticeable process of change. Is that down to the fact that you’re a millennial? How much affinity is there between that generation and Natuzzi?
I’m naturally inclined to buy into the digital disruption we’re witnessing at the moment. I like analysing the impact of digital technology on brands, identifying the latest icons of innovation and looking for new ways to communicate. I’ve focused on these issues in order to bring the company – and the brand – into a new dimension and forge new relationships.
I believe in a new way of interacting and communicating with our brand lovers and I want to take our story to the next level by bringing in new voices. That’s what’s going to be able to give us the appeal needed to attract new generations of consumers and make them think of Natuzzi as the most dynamic and innovative brand around when it comes to furnishing their homes. I’m convinced that Natuzzi’s biggest strength is the way we draw inspiration from different ideas and concepts – it allows us to ensure we keep people and human relationships at the centre of our production philosophy while taking inspiration from a wide range of fields. We want to be about both local and global, unique pieces and industrial-scale production – because our identity is constantly evolving.

Natuzzi Italia is presenting “City Carnival”, an installation by Chinese artist Xu Zhen, from 21st to 25th November 2018 in Shanghai at the Jing An Kerry Center during the third edition of the Salone del Mobile.Milano Shanghai 2018.

Xu Zhen site-specific installation is a deep contemplation on art and living. It inserts furnishings from the Natuzzi Italia collection into a “room” made of coloured wood in organic, linear shapes: a place to rethink the relationship between cities and private spaces.

Masks by Natuzzi to support Italy

A voyage in history with Armando Rho